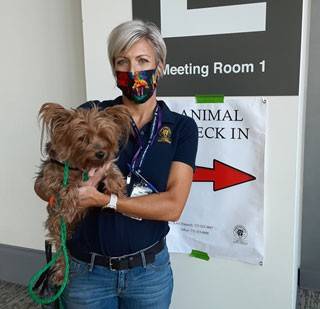 Our pets are an important part of our lives, and many of us can’t imagine being without them, or even temporarily far away. But for evacuees of the Caldor Fire, many had to make the choice about what to do with their dog or cat. The fire affected homes and land surrounding and including the city of South Lake Tahoe California. As of September 24, more than 220,000 acres have burned, now mostly confined to unpopulated mountain areas. As the fire spread in late August, so did the need for emergency shelters. And of course, the Red Cross was there to provide that space of comfort and security for evacuees.

Two shelters were opened in the towns of Gardnerville and Carson City Nevada, both of which are in the vicinity of the affected areas. As evacuations increased, those two locations were eventually folded into one mega-shelter, up the road in Reno, at its convention center.

But what about pets? Usually, the Red Cross works with local animal welfare agencies to provide shelter to dogs, cats, and large animals such as horses.

As evacuees traveled north to Reno, their pets made the journey with them. The Reno shelter saw several hundred evacuees in residence for more than a week. Not quite next door but in the same facility, dogs and cats were sheltered in a large area that was clean, cool, and quiet. A relaxing respite from the confusion and stress of being evacuated.

The care of animals during this disaster response is where community partnerships shined the brightest.

In the Reno area, the Washoe County Regional Animal Services, and the Nevada Humane Society (NHS) worked in tandem to provide staffing and support services to evacuated pets who temporarily called the shelter home.

“Having animals close or nearby to their people is important. They are all family,” explained Shyanne Schull, director of Washoe County Regional Animal Services.

“This is an important part of emergency management,” Schull said. “We have emergency resources; crates, bowls etc., we are able to pick up and go where we’re needed. Setting up a shelter is a routine service that we provide.”

Washoe County has two mobile units containing equipment that can shelter up to 450 small animals. They also have livestock trailers and emergency sheltering locations that accommodate large animals for evacuation and sheltering.

The organization is no stranger to the Northern Nevada Chapter of the Red Cross. As recently as last June, they provided animal care and sheltering services at two Red Cross evacuation centers to accommodate pet evacuees from the Beckwourth Complex fire north of Reno.

Similar to the Red Cross message, Schull encourages pet owners to put together an emergency kit for those times when an evacuation may be pending or imminent. Schull’s most important advice for pet owners: “Prepare for this type of emergency – make sure your animals are micro-chipped and have collars and tags on.”

The working partnership between Washoe County and the Nevada Humane Society benefits both organizations in providing effective safeguards that ensure sheltered pets and large animals receive proper care during their stay.

The work at the Reno shelter was accomplished through staff on the county side and volunteers and staff associated with the Humane Society. They worked together to ensure that the animals were sheltered in appropriate crates, fed, had water, were walked, and given emotional support.

Owners housed on the Red Cross side of the shelter were able to visit with their pets and offer the reassurance that family wasn’t too far away.

“Some animals handle the situation better than others,” said Greg Hall, C.E.O. of the Nevada Humane Society (NHS). As part of its everyday mission, NHS not only provides quality care for animals but helps place homeless pets in loving homes. In addition, they provide programs and services through their shelters in both Carson City and Reno.

Hall explained that in this situation, NHS acted in a support role to Washoe County. Animal Services and NHS staffed the animal shelter section at the convention center 24/7. The county did the set up as they were the jurisdiction in charge.

“The partnership with Washoe County is unprecedented,” Hall stated. “Working with the County helps us to develop best practices and improve our emergency response and teamwork. A lot of good will comes out of it.” As part of that partnership, NHS manages the adoptions of the un-claimed animals that find themselves in the County Regional Animal Services facility.

When it was time for evacuees to return home, pets were also transported with their owners back to their neighborhood. Whether by car or bus, animals were escorted out by personnel from both Washoe County and NHS. Smiles, wags, and meows were all around as both human and pet made the trek back to their mountain community.

Red Cross Offers Thanks to Our Supporters
.type=article.p=1
View All
/content/redcross/en/local/nevada/about-us/news-and-events/news/community-partnerships-housing-evacuated-pets-from-caldor-fire