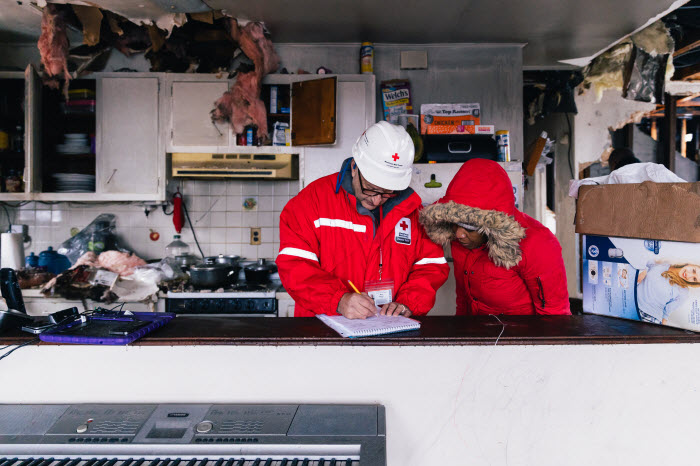 02/12/19 Queens, N.Y. The Virtuous Cycle: Disaster volunteer Mark Gordon joined the Red Cross in January of 2019 as a way to spend his retirement giving back to the organization that once helped his family after a fire. In this picture, he provided assistance and support after a fire in Queens. (photo by by Lisa Weatherbee, American Red Cross in Greater NY) 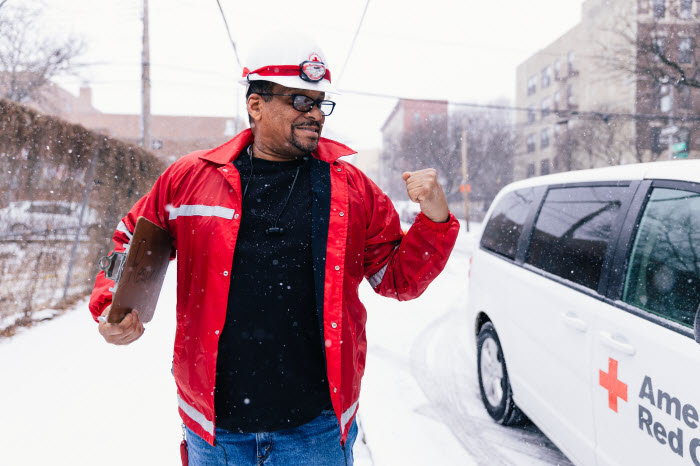 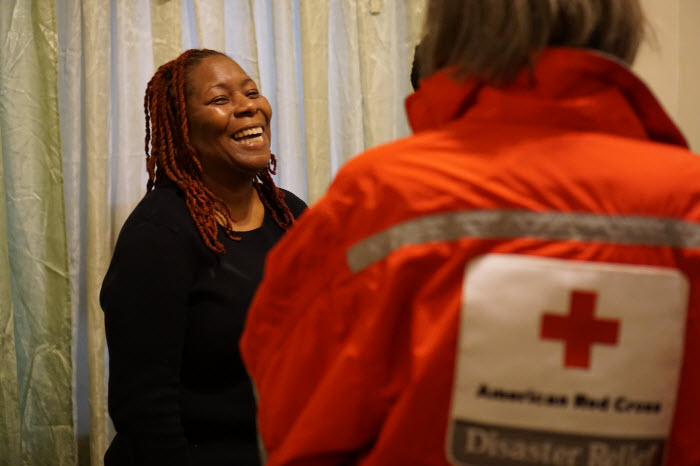 02/14/19 Brooklyn, N.Y. Signs of Relief: Cassandra Philip and her 20-year-old son reconnected with the Red Cross team who helped them after a fire destroyed their Brooklyn home. (photo by Michael de Vulpillieres, American Red Cross in Greater NY) 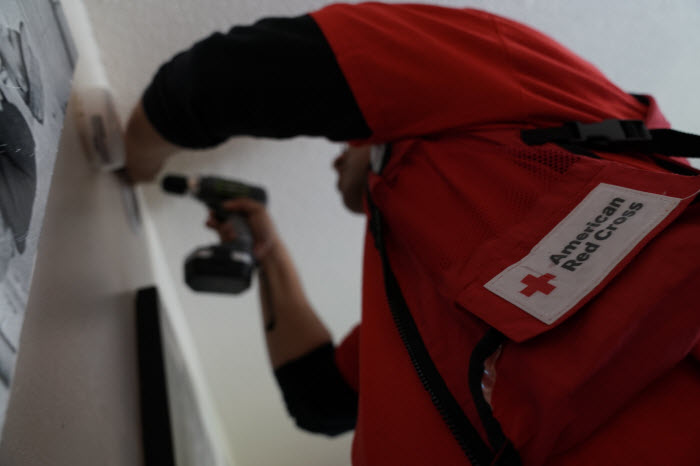 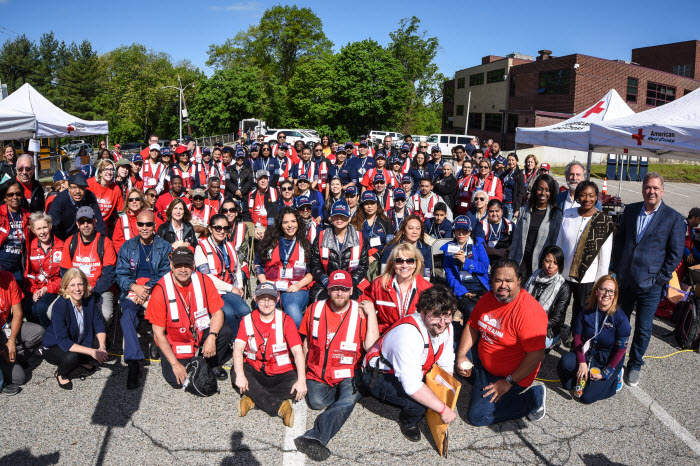 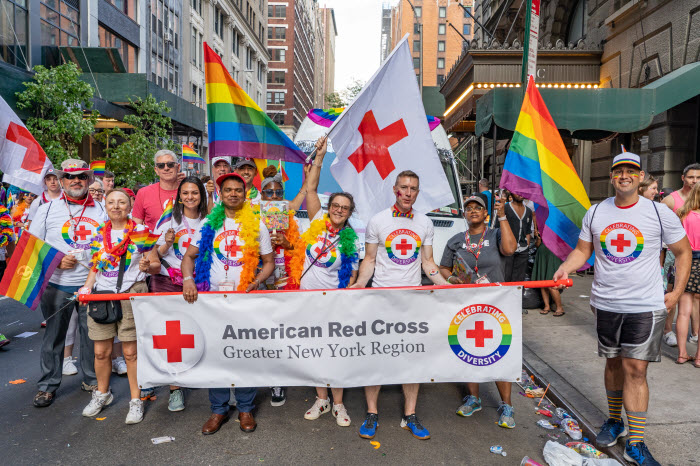 06/30/19 Manhattan, N.Y. Red + Rainbow: Together with thousands from around the globe, Red Cross staff and volunteers marched in the New York City Pride Parade to celebrate diversity and inclusion. (photo by John Eng, American Red Cross in Greater NY) 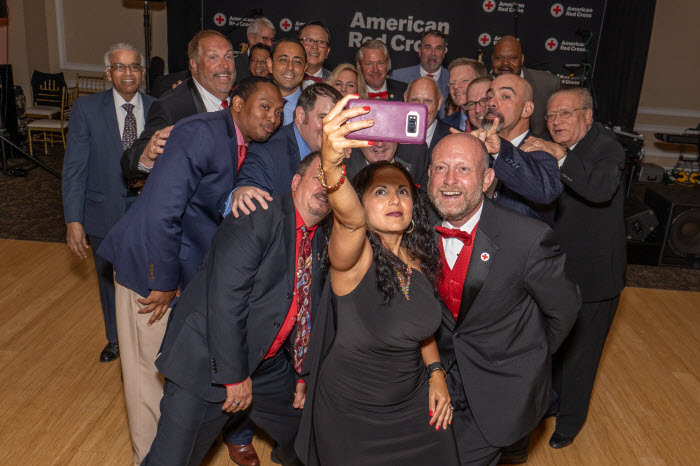 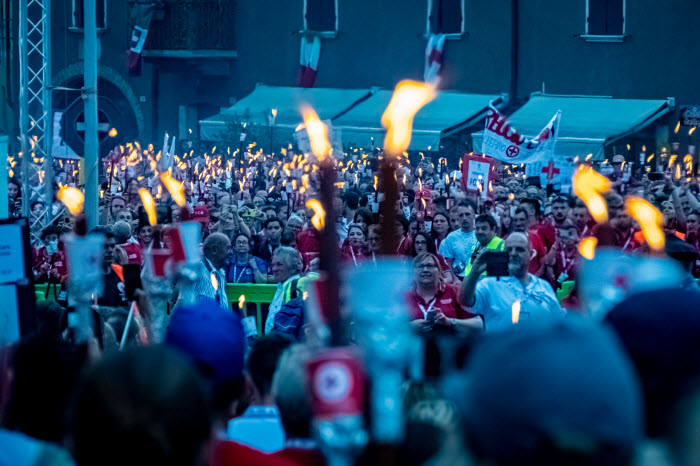 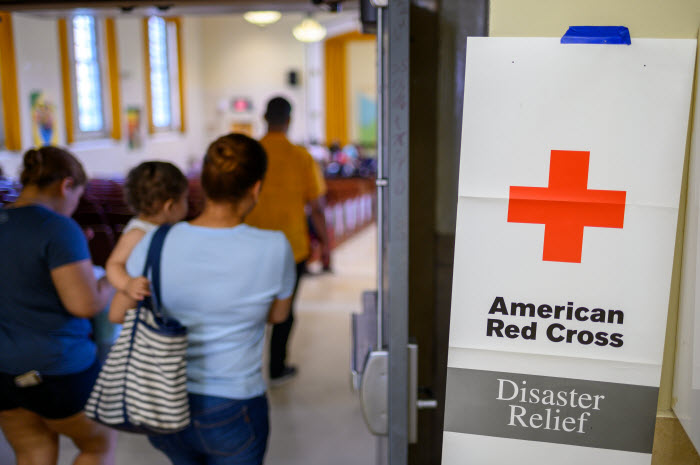 08/05/19 Bronx, N.Y. There for those in Need: Following a seven-alarm fire that tore through a 40-unit apartment building in the Bronx, Red Cross and NYC partners opened a Reception Center for affected families. Red Cross volunteers provided emergency housing, food, water, health and emotional support, financial assistance and other relief. (photo by Kevin Suttlehan, American Red Cross in Greater NY) 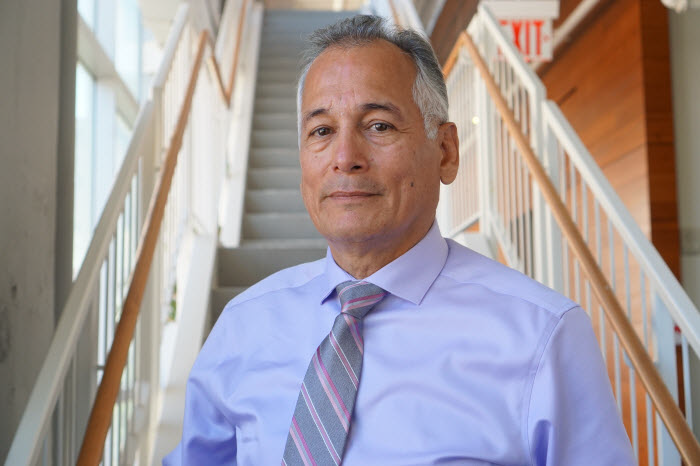 09/03/19 Bronx N.Y. Support for a Veteran After Tragedy: After a tragic home fire destroyed his apartment and took his beloved pets from him, Bronx veteran Carlos Blanco turned to the Red Cross for help and hope. (photo by Michael de Vulpillieres, American Red Cross in Greater NY) 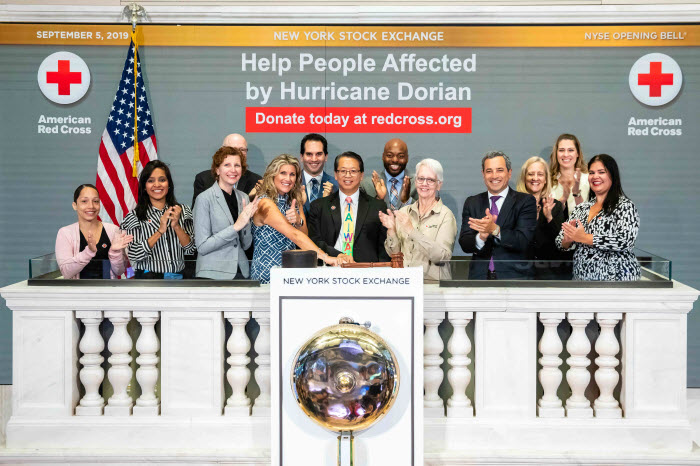 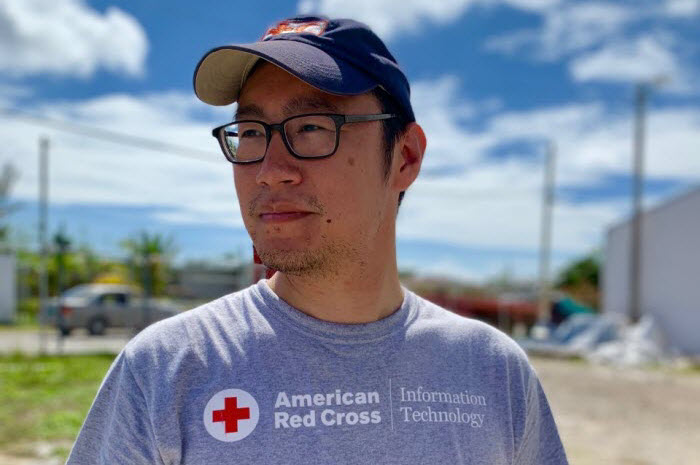 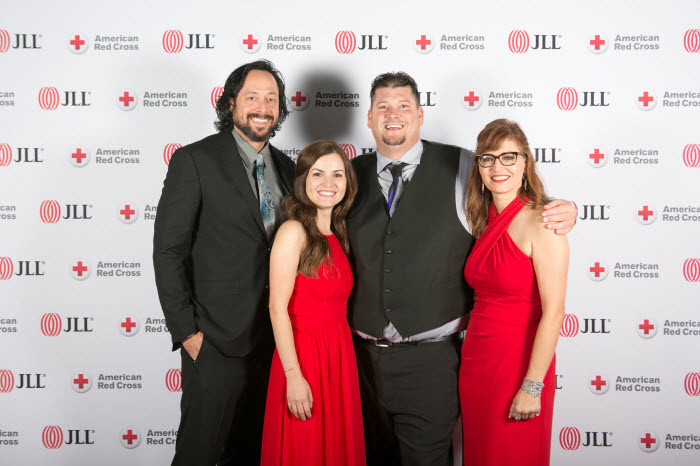 10/16/19 Manhattan, N.Y. Through the Fire: At our 2019 Heroes Among Us Gala, we honored Heroes of the Paradise, CA, wildfires: Kevin McKay, Mary Petersen Ludwig, Abigail Gerspacher-Davis and Allyn Pierce. (photo by Marcie Revens, Up Studios) 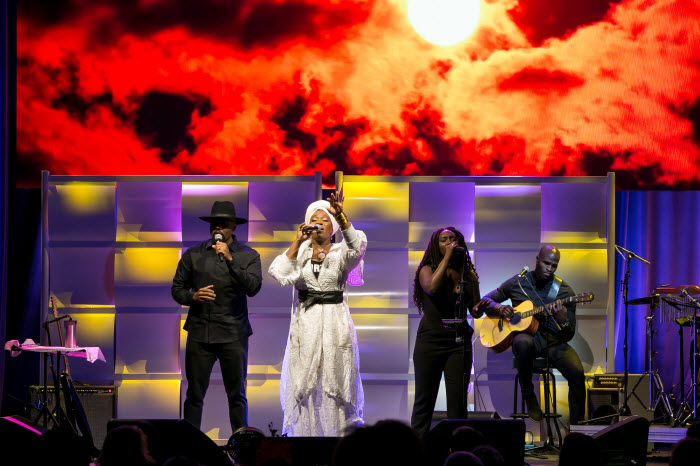 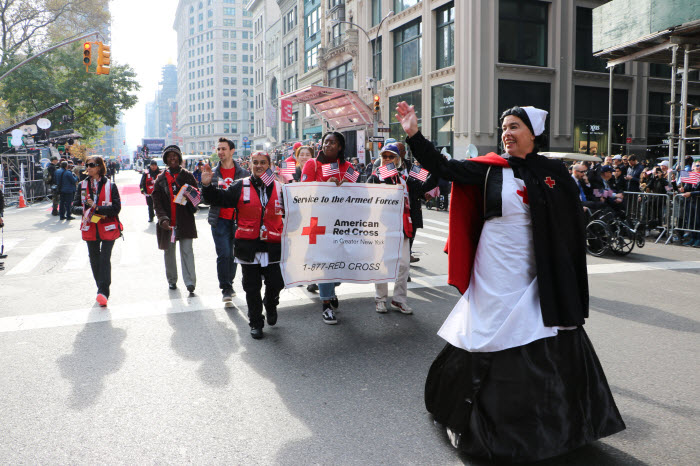 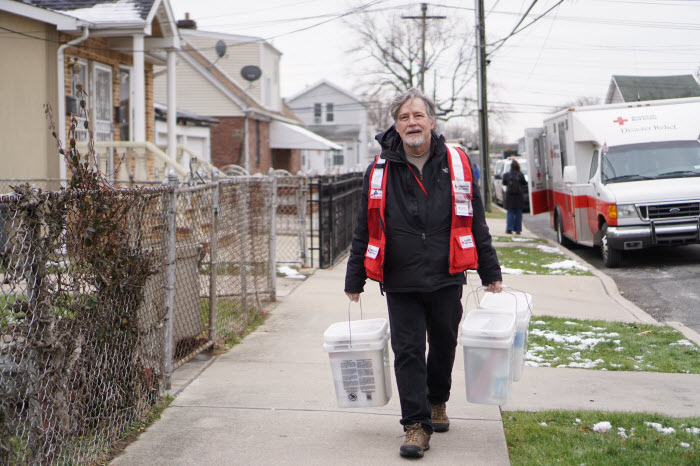 NEW YORK - Throughout 2019, from South Ozone Park, Queens to Charleston, South Carolina to Thessaloniki, Greece, American Red Cross teams from across NYC, the Lower Hudson Valley and Long Island rushed to attend to intense human need. Ever at the ready, they quietly responded at a moment’s notice, 24/7, to deliver relief and care to those suffering what is likely the worst moments of their lives.

“Our commitment to those impacted by emergencies far and near has been unwavering,” said Susan Rounds, Interim CEO, American Red Cross in Greater NY. “I want to extend my deepest gratitude to all who have supported our work in 2019, including our 4500+ volunteers who give so much of themselves to help others.”

Carlos Blanco, a retired military veteran living alone whose Bronx apartment was destroyed by fire that also took from him his three beloved pets last September, was among those New Yorkers from this region who turned to the Red Cross in 2019.

“People don’t even know how important an organization like the Red Cross can be,” said Blanco, “and what it represents during people’s worst time. Basically, it’s hope. They don’t care who you are. They just know you need help.”

Other recipients of Red Cross services, Cassandra Philip and her 20-year-old son, Jaquan, of Crown Heights, Brooklyn, expressed their deep gratitude in 2019 for the priceless and ongoing support to rebuild their lives after a devastating fire.

“When I got back from the hospital to meet with the fire marshal, a young man and a lady [from the Red Cross] showed up,” said Cassandra. “He even gave me a hug which felt like a million, bazillion dollars to me at that point in time. It comforted me, it allowed me to just take it one step at a time, it told me someone cared. I know I have my son, but this is a complete stranger.”

When large disasters struck outside our region, local Red Cross staff were there as well. Throughout 2019, 73 Greater NY Red Cross staff members put their lives on hold to travel far from home, sometimes for up to three weeks, to help after wildfires in California; flooding in central Oklahoma, Missouri, Kansas and Nebraska; tornadoes in east Alabama; a tropical storm in Texas and a hurricane in Georgia, Florida, South Carolina and North Carolina.

At times, local staff traveled even farther to help. Bronx resident Raul Rivera Nunez, Regional Director of Planning, Readiness and Situational Awareness, and Queens resident Andy Li, from the organization's IT team, both deployed to the Bahamas after Hurricane Dorian devastated the country. Elsewhere, Tiara Youmans, Regional Director of Client Services and Recovery (a Manhattan resident), brought her expertise to Northern Greece to support the International Red Cross response to the refugee crisis there. All three are part of a small roster of highly-specialized and experienced American Red Cross disaster professionals - International Delegates as they are called - who deploy and provide aid during global crises.

Also in 2019, the American Red Cross in Greater NY helped make communities safer and more resilient by installing thousands of free smoke alarms in area homes; by teaching health and safety skills like CPR, water safety and first aid; and by empowering local families with vital disaster preparedness skills. Along with these services the organization also collected lifesaving blood and offered support to service members and their families.

“It just touches people and most people know someone or have been personally touched by the Red Cross in some way,” said Marilyn Vallejo, a Long Island resident and longtime volunteer with the Red Cross Service to the Armed Forces program. “It’s an organization, but inside of that organization is such a human heart.”

Help people affected by disasters like storms, fires and countless other crises by making a donation to Red Cross Disaster Relief. Your gift enables the Red Cross to prepare for, respond to and help people recover from disasters big and small across the United States. Please consider making a donation today. Visit www.redcross.org, call 1-800-RED CROSS (1-800-733-2767) or text the word REDCROSS to 90999 to make a $10 donation. The Red Cross is proud that an average of 90 cents of every dollar we spend is invested in delivering care and comfort to those in need.

You can also give of your time by volunteering. Visit www.redcross.org/volunteer to register.

The American Red Cross shelters, feeds and provides emotional support to victims of disasters; supplies about 40 percent of the nation's blood; teaches skills that save lives; provides international humanitarian aid; and supports military members and their families. The Red Cross is a not-for-profit organization that depends on volunteers and the generosity of the American public to perform its mission. For more information, please visit www.redcross.org or visit us on Twitter at @RedCrossNY.

Red Cross Volunteer Uses Training to Help Both While at Home and Deployed
Robert Bernstein
.type=article.p=1
View All
/content/redcross/en/local/new-york/greater-new-york/about-us/news-and-events/news/2019-year-in-review