A Lifesaving Award Celebrating A Legacy of Hope 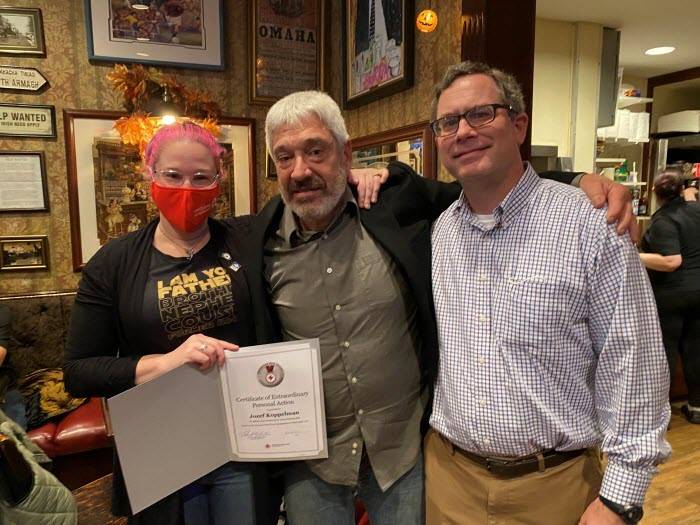 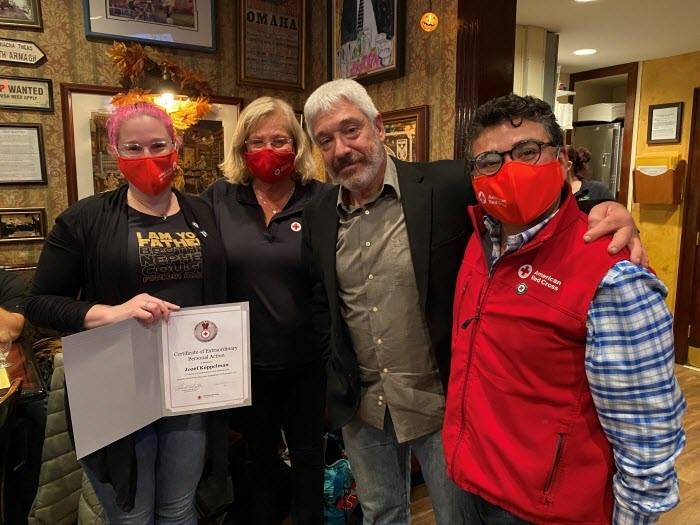 In May 2017, David C. Bosch was swimming off Brighton Beach in Brooklyn, New York, with a group of open water swimmers when, suddenly, he stopped moving. Jozef Koppelman and a few others in the water with David quickly pulled him out of the water and immediately began to administer CPR, which they continued as they awaited professional help. When assistance arrived, EMTs took over the procedure and brought David on to advanced care.

Tragically, David did not survive, as he had suffered a massive stroke. But the CPR Jozef and the other swimmers performed, kept blood pumping through David’s body long enough for his organs--including his heart and kidneys--to be viable for donation after his passing.

On Friday, November 12, 2021, David’s friends and family gathered in New York City to celebrate his life and legacy, and also to present Jozef with a special recognition: the American Red Cross Certificate of Extraordinary Personal Action. The award recognizes individuals who exemplify the mission of the Red Cross to prevent and alleviate human suffering by taking action in an emergency situation and help save or sustain a life.

David and Jozef were part of a vibrant community of open water swimmers who regularly trained at Brighton Beach. Thanks to the initiative of Red Cross-certified instructor Bonnie Schwartz Nolan, also an avid open water swimmer, many of the members, including Koppelman, had completed CPR/First Aid courses at the beach. This training allowed the group to create waves of hope in a very special way.

At the November event, David’s brother Darren shared, “This ceremony is to celebrate those who help save lives. When Jozef rescued David from the water, and he and others performed CPR, they could not have known that while one life would be lost, they would be saving the lives of three others.”

Speaking about his brother, he added, “David took his health very seriously and was an intense athlete. He did cold water swimming with the Coney Island Polar Bears. He ran the New York and Boston marathons, and he rode his bike all over New York. Given how fit he was, no one could believe something like that could happen. Despite that fatal stroke, his heart kept beating, thanks to the heroic efforts of those who assisted and performed CPR.”

In addition to the swimmers who performed CPR, Darren also offered his gratitude to Bonnie Schwartz Nolan, the instructor who taught the lifesaving procedure to the group.

“After 18 years of teaching CPR, this is the first time I have heard of this result,” said Bonnie at the ceremony. “I can’t imagine continuing to teach without sharing this story every time, as if we needed more reasons for everyone to learn CPR. On behalf of the Red Cross, we are honored to present to you, Jozef, this Lifesaving Award for your efforts in giving CPR to David and the lasting effect it had on others as well.”

Humbled to receive the honor, Jozef reflected the impact of his actions: “For years I saw this as a failed rescue. When Seth told me that as an organ donor, there was a silver lining, it helped me to find meaning to this event and to see the waves that rippled out from his life.”

People can go to LifesavingAwards.org to nominate and recognize an individual or group of individuals who have used the skills and knowledge learned in an American Red Cross Training Services course to help save or sustain a life.

Red Cross Volunteer Uses Training to Help Both While at Home and Deployed
Robert Bernstein
.type=article.p=1
View All
/content/redcross/en/local/new-york/greater-new-york/about-us/news-and-events/news/a-lifesaving-award