Six Decades of Service and Counting 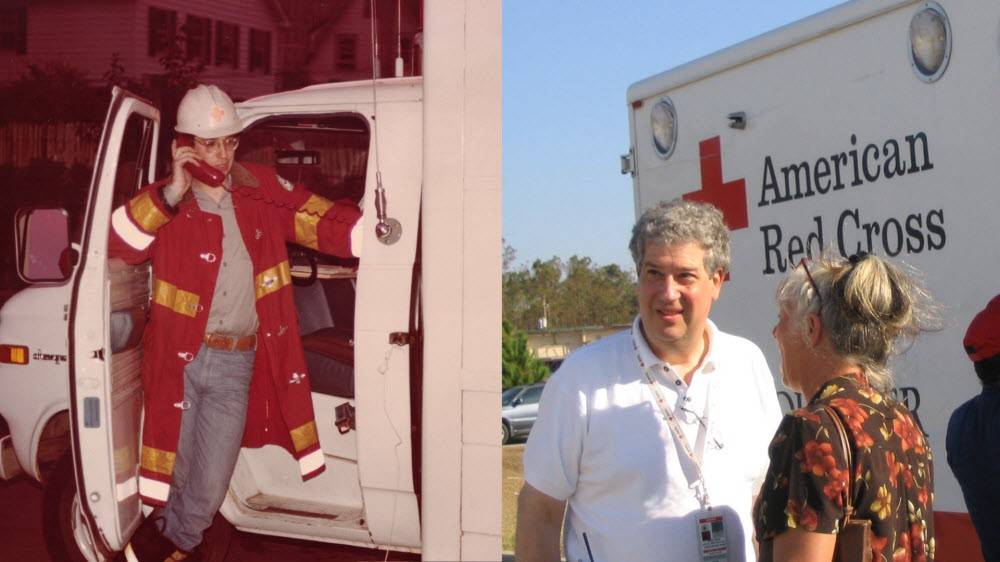 Greenwich, Conn. – “Start early, be open to new challenges, and never lose sight of what is our core mission, which is helping people at a time when they need it most.” This is the advice Ross Ogden shares with anyone who is considering becoming a Red Cross volunteer. These words of wisdom come from six decades of service through the Red Cross.

The youngest of three children, Ross was born in Chicago, Ill., and moved to Greenwich, Conn., when he was about 6 years old. He started his Red Cross career as a junior in high school, when a new dentist in town approached Ogden and his friends and offered to teach them a first aid course.

Ogden and his classmates though it sounded like fun, and quickly moved through basic and then advanced first-aid training. Once they finished their courses, that’s when his Red Cross journey really got underway.

“The dentist said, ‘now you have all this training so I'm going to form for the local Red Cross what today we call a FASB Team, a first aid standby team, and we’ll be going to public events and we’ll offer first aid,’ and that transitioned us from a training mode into a service mode,” said Ogden.

Recalling an early experience as part of the first aid team, Ogden said, “One night I got a call that there was a residential house on fire. I put on my gear and drove to the site of the fire. When I got there the Chief directed me immediately over to a physician who was the town medical examiner but as there providing emergency care. I was asked to set up a triage center because there were a number of firemen who were going down as a result of injuries like smoke inhalation.

“The fire happened in the late afternoon the last week of my senior year in high school. I was blowing off the faculty dinner because I was at the fire scene. The next Monday when I arrived in school the head of the school called me into his office and he said I'm very disappointed … and I said, well you know I have a good excuse. But he didn’t want to hear it. Later that afternoon the newspaper came out and on the front page in the center of the paper was a picture of me administering oxygen to a fireman. The next morning, I got summoned back to his office and he issued an apology.”

After finishing at the Brunswick School, he went on Swarthmore College to study English Literature and later received an MBA with a concentration in marketing from the University of Virginia. Ogden went on to work in marketing for General Mills on major brands like Jell-O and Cool Whip, before starting his own consulting business in the late 1980s.

The Red Cross remained a consistent and important part of Ogden’s life during his professional career. Over the years he wore many different hats and volunteered countless hours for the organization including deploying to some of the biggest tragedies of our time: 9/11 and Hurricane Katrina.

“I think one of my favorite things, and I think it’s true for just about anybody who has been out on a disaster deployment, is getting to know the other people deployed with you and getting to know what their backgrounds are, where they came from, and why they are there,” said Ogden.

Ogden retired in roughly 2013 when his wife, Cathy, was diagnosed with a serious illness. Ogden cared for her until her death in 2015.

Although Ogden cannot pinpoint the moment he knew he would be a lifelong Red Cross volunteer, he does say the many opportunities the organization presents ensure “you can’t get bored because there’s always something different and interesting to do.”

The last four years, Ogden has worked as an executive volunteer partner in biomedical services, where he has been instrumental in supporting biomedical volunteer workforce engagement.

“I spend a lot of my time thinking about how we can make that job more productive, more satisfying and enable the Red Cross to collect more blood and be more efficient in the way that it does so that we’re sustainable. It isn’t as dramatic as deployments, but it’s still a wonderful opportunity to work with a great group of people and enable other volunteers to achieve their objective of delivering the mission,” said Ogden.

After seeing the organization through many changes, including serving on the national Board of Governors, Ogden is most proud that during his sixty years with the Red Cross he has really touched every line of service, from frontline direct service delivery to the board of governors, from management at the local level to management at the national headquarters level.

“I think the special sauce is the combination of mission … helping people when they need it most. There’s nothing more memorable than that. Those moments just stick with you because you feel like you are really caring about the humanitarian mission.”

“Another part is the friendships that I’ve made at the Red Cross and many have become lifelong friends. And the other part is the diversity of the organization. There is a richness in diversity that absolutely I find energizing, empowering, and just enourmously uplifting.”

Thank you, Ross for your service and dedication.

Red Cross Volunteer Uses Training to Help Both While at Home and Deployed
Robert Bernstein
.type=article.p=1
View All
/content/redcross/en/local/new-york/greater-new-york/about-us/news-and-events/news/six-decades-of-service-and-counting