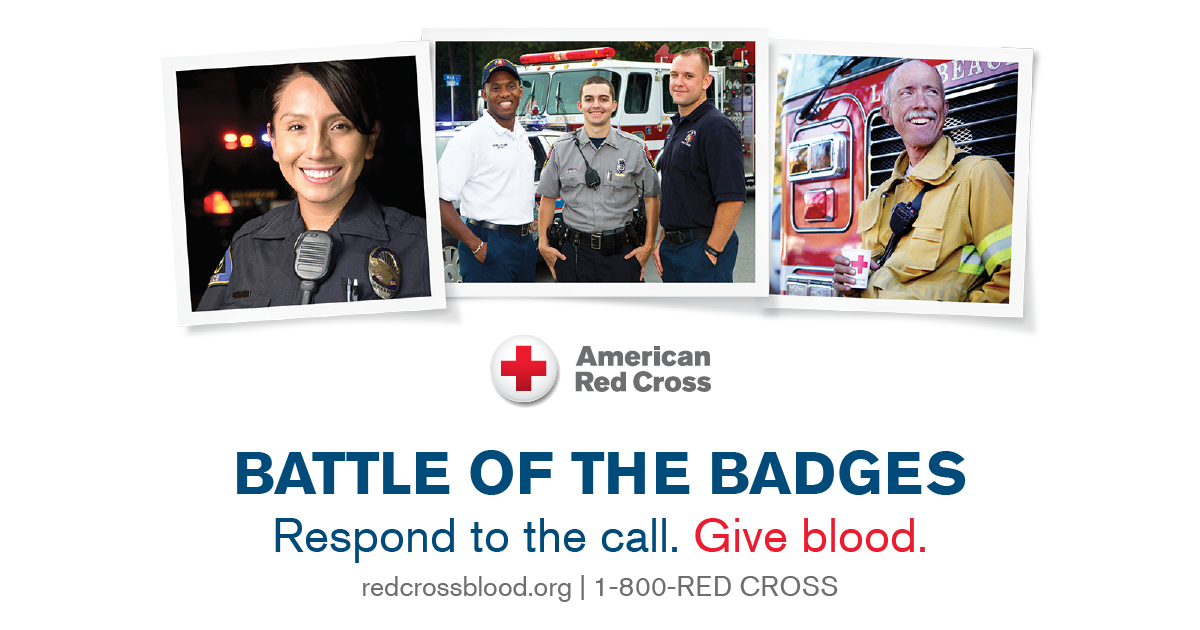 LOS ANGELES, January 3, 2022 — Los Angeles first responders’ top priority is to help others in harm’s way. For the 17th year since 2007, first responders will further their commitment to saving lives by bolstering the community’s blood supply. During the Battle of the Badges blood drive, LA County law and public safety agencies compete to see who can recruit the most blood donors.

“Day in, day out, first responders here in Los Angeles answer the call to save lives and during Battle of the Badges they go beyond the call of duty to help local patients in need of blood,” said Joanne Nowlin, CEO of the American Red Cross Los Angeles Region. “They roll up their sleeves and inspire Angelenos to also donate and help save lives.”

More than 50,000 blood donations have been collected in Southern California since the Battle of the Badges blood drive began in 2007 by Mahagony Thomas of the United States Probation Office. Together we can work toward our 2023 goal of collecting 2,000 blood donations for patients in need. Join Los Angeles Chief of Police, Michel Moore as we encourage community members and badge-carrying agencies to participate in the 2023 campaign.

How To Donate Blood

The start of the new year is one of the most challenging times to collect blood products as severe winter weather often causes widespread blood drive cancellations and donors may postpone giving due to illness. Blood and platelet donors are needed now to ensure patient needs are met in the coming weeks.

Join our efforts to stand side by side with first responders and come out and donate blood during this annual lifesaving event. Make an appointment by using the Red Cross Blood Donor App, visiting RedCrossBlood.org or calling 1-800-RED CROSS (1-800-733-2767) and enter sponsor code BOB23.Those who come out to give at a Battle of the Badges blood drive will receive a commemorative T-shirt, while supplies last.

Completion of a RapidPass online health history questionnaire found at redcrossblood.org/rapidpass is encouraged to help speed up the donation process. A blood donor card or driver’s license or two other forms of identification are required at check-in. Individuals who are 17 years of age in most states (16 with parental consent where allowed by state law), weigh at least 110 pounds and are in generally good health may be eligible to donate blood. High school students and other donors 18 years of age and younger also have to meet certain height and weight requirements.

The American Red Cross shelters, feeds and provides comfort to victims of disasters; supplies about 40% of the nation's blood; teaches skills that save lives; distributes international humanitarian aid; and supports veterans, military members and their families. The Red Cross is a nonprofit organization that depends on volunteers and the generosity of the American public to deliver its mission. For more information, please visit redcross.org/la or CruzRojaAmericana.org, or visit us on Twitter at @RedCrossLA.