American Red Cross Volunteers Use Technology to Save the Day 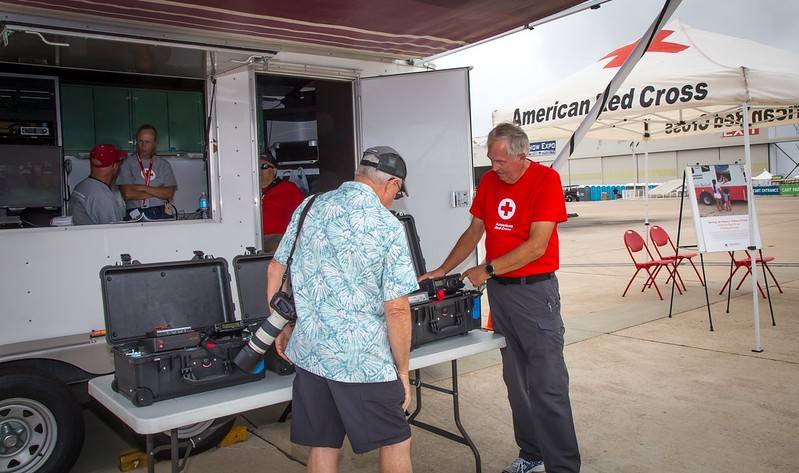 “We will help people in their darkest moment, all the rest is all white noise, static. How you do it is not as important as that you ARE doing it.”

Imagine this: Disaster has struck. Devastation is everywhere. All communications are gone. The need for assistance is monumental.

The American Red Cross is there to help, but without the ability to communicate, assistance would be limited. It’s vital in times of disaster to be able to communicate needs in the community back to the Red Cross headquarters allowing people, food, shelter and support to be dispatched.

Enter the Disaster Services Technology (DST) team within the Red Cross. Like Mighty Mouse, here they come to save the day with go-kits that can quickly set up communications – connecting radios to the internet. They are the backbone of an operation with limited communication capabilities, providing circuits of connectivity between all Red Cross services so that volunteers can all do their job efficiently.

“We have lots of capabilities,” said Bob Birch, DST Lead for the American Red Cross of San Diego/Imperial Counties. DST includes radio, set up of computer networks, maintaining and managing inventory and dispersing of cell phones, tablets, laptop computers – anything and everything related to technology.  They can come to the rescue for Red Cross communications connectivity whether it be via radio frequency or Internet capabilities.

Depending on the level of devastation and the capabilities still in place, the DST team will use whatever is still standing and available. They are ready for anything. They start out simple: having a variety of ham radios, cell phones and computer equipment on hand. These tools allow them to establish communications when other means are not available.

In a disaster, the first step is to assess the situation. Is there cell service? If so, how many cell phones are needed to distribute among the volunteers so they can help people affected by this disaster? Is there Wi-Fi? How many laptop computers are required to run operations, shelters, feeding and more?  How good is the connectivity? If cell service is down and there is no Wi-Fi, the first order is to establish it.

“We have an HF go-kit,” Birch said. “It has a HF antenna and a modem. You put up your antenna, set up your radio, connect your laptop up to it, you throw that signal up in the air, it is picked up by other HF Stations and retransmitted by the internet and you can sit here and transmit emails all day long in the middle of nowhere.”

It’s a technical world with a bit of Star Trek mixed in. Various radio frequencies, including VHF (Very High Frequency) and HF (High Frequency) radios can be used depending on variables such as weather, terrain and atmosphere. Many of these frequencies are within Amateur Radio bands, and some are commercial radio frequencies. For that reason, many DST volunteers are encouraged to be ham Radio operators.

WinLink is another messaging system that DST relies on. The worldwide network uses amateur-band radio and government frequencies to provide interconnection services that include email with attachments, emergency and relief communications and message relay.

When the call goes out for disaster relief, DST volunteers mobilize quickly to set up communications and operate for at least 72 hours, which is usually the amount of time it takes for Red Cross leadership on the ground to assess needs, request equipment and receive supplies from the American Red Cross National Headquarters. The National Headquarters has a wide range of capabilities that are relied upon in large-scale disasters across the United States, including servers, cases of cell phones, laptops, tablets, MIFIs that tie into the cradle point and handheld radios.

Once the equipment arrives and is distributed to disaster responders, Disaster Services Technology volunteers then provide customer service and technical support for troubleshooting any problems that may arise. Much of the equipment is set up in and around shelters and wherever the Red Cross has a presence.

At these locations, laptops are set up to assist in Safe and Well registrations, through which people affected by the disaster can report their status for concerned relatives. Such computer networks are also used to start casework, which helps shelter residents decide on their next steps in their recovery and resume normal life as soon as possible.  Cases can be quickly initiated in a shelter and efficiently followed-up on.

“Ham Radio is a great hobby,” said Birch, “but when it comes to disasters it is a reliable opportunity to keep communications going when all other systems fail. We do not need any infrastructure.” The local Red Cross team of volunteers are self-sufficient, even to the point of having their own generator to supply power for batteries that need charging after 10-12 hours of use in the field.

While DST can be very technical, the impacts can be far more human. Last year, Red Cross volunteer Sarah Peterson was deployed to North Carolina first and then to Florida after Hurricane Michael. The whole town of Mexico Beach was flattened. “It was heartbreaking,” she said.

Peterson was overwhelmed by what she saw while on deployment in North Carolina, where flooding had destroyed homes. “Going down the highway delivering equipment to shelters I saw front yards with piles of debris. In it you see a crib or a playpen. Going through this on your own is one thing but having to go through it with kids, I can’t even imagine,” she said.

In North Carolina Peterson’s roommate was a chaplain. She was having trouble with mapping on her cell phone. It kept dropping her location. Without her phone she could not navigate and reach those who needed spiritual comfort. Peterson had a fellow DST technician fix it for her and the chaplain was now able to go and reach those who needed her most. DST had come to the rescue.

Peterson never thought she would end up in DST. She started out her Red Cross volunteerism the “usual” way in Feeding and Sheltering and soon discovered DST. With her computer background she found that she could contribute by using her expertise and field of interest.

According to Birch, you do not need to be an expert in computers or technology to be a DST volunteer. All you need is to have an interest or passion for it and the flexibility and willingness to learn. The Red Cross offers all the training you need and will prepare you well. The greatest challenge for Birch is to have enough volunteers to support an operation. He worked to recruit new volunteers at the recent Miramar Air Show, where DST was part of an impressive display of the many services offered by the Red Cross and more DST volunteers are welcome.

The Disaster Services Technology team started out as a small amateur radio group that formed to assure emergency communications for the local Red Cross. DST meets the first Saturday of every month. Their mandate is to make themselves more available and valuable to the Red Cross.

“Keep the mission in mind,” said Birch. “We will help people in their darkest moment, all the rest is all white noise, static. How you do it is not as important as that you are doing it.”

If DST is your “how,” then send Birch an email at bob.birch3@redcross.org for additional details. For more information on how to volunteer with the American Red Cross, please visit redcross.org/volunteer.