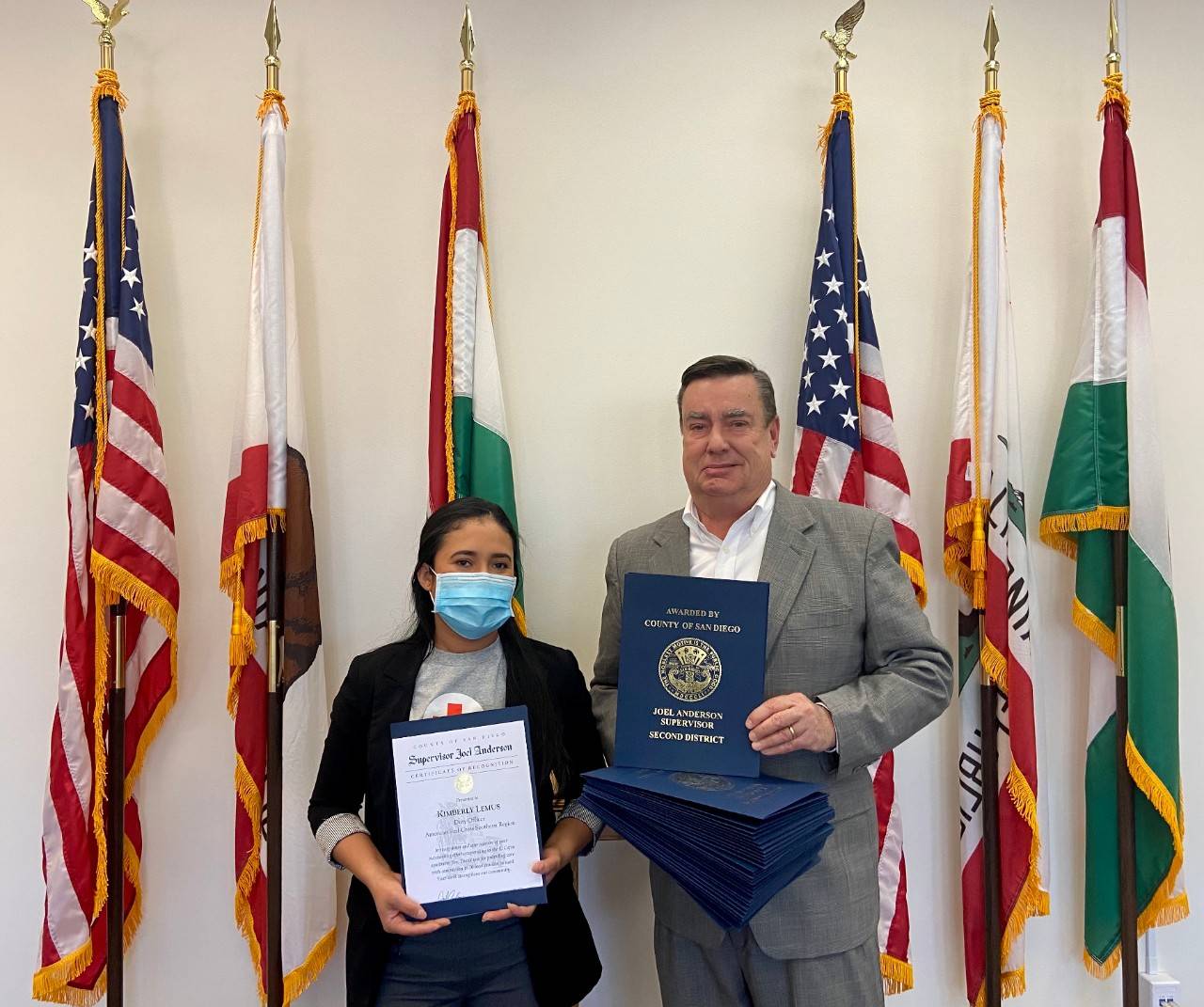 On September 24, 2021, just before midnight, Kimberly Lemus, a San Diego State University graduate student, responded to her first call as an American Red Cross Disaster Duty Officer intern. In this position, she organized the Red Cross response to an apartment complex fire in El Cajon. A month after the response, Kimberly accepted County Awards of Recognition on behalf of 35 volunteers who responded to the fire from San Diego County’s District 2 Supervisor Joel Anderson.

Disaster Duty Officers are the liaison between first responders such as fire departments and police departments and the Red Cross. When a call comes in from first responders requesting Red Cross assistance, the Disaster Duty Officer has the crucial role of leading the response by coordinating disaster response teams and making critical decisions that help those affected by disasters including home fires, wildfires and more.

When a call came in from Heartland Fire on September 24, Kimberly was both excited and nervous to coordinate her first response team. With the help of Dave Maloney, Senior Disaster Program Manager for the Red Cross Southern California Region, Kimberly called volunteers and sent nine individuals to the scene of the fire. In the early morning on September 25, just over an hour after the Red Cross was requested for assistance, the team arrived at the Regency Apartments in El Cajon to help meet the immediate needs of those displaced.

"In many cases, families lose everything -- shelter, food, clothes, credit cards, ID, heirlooms and even their cars,” Dave explained. “In all cases, they don't know what to do, who to turn to or what will happen next.” The Red Cross provides help and hope to those displaced by disasters. Whether it’s a compassionate, listening ear, a safe place for those displaced to rest their heads at night, a warm meal or guidance for the days and weeks ahead, Red Cross volunteers team up to help those in need.

Kimberly’s pursuit to help the community and her leadership in organizing the response helped the Red Cross team provide resources to those facing some of the toughest day of their life. “The biggest fulfillment in life is making a positive impact in other people’s lives,” said Kimberly. Kimberly and 34 Red Cross volunteers came together to provide financial assistance, health services, mental health and spiritual counseling, and recovery planning and support to 31 families (66 individuals) that were affected by the fire.

Just a month after the response, Supervisor Joel Anderson honored Red Cross volunteers with County Certificates of Recognition. Kimberly and Dave visited Supervisor Andersons District 2 office to accept the awards on behalf of the volunteers who responded to the fire.

“One of the most rewarding parts of my job is getting to recognize individuals and organizations that have selflessly helped their neighbor in a time of need,” San Diego County Supervisor Joel Anderson shared. “I am honored to present County certificates of recognition to the many Red Cross staff and volunteers who assisted in the El Cajon Apartment Fire, including SDSU student intern Kimberly Lemus who was the Duty Officer for the apartment complex fire. These volunteers’ efforts have not gone unnoticed, and I am so grateful for their dedication and service.”

Red Cross volunteers pictures on the scene of the El Cajon apartment complex fire providing help and hope to those displaced.