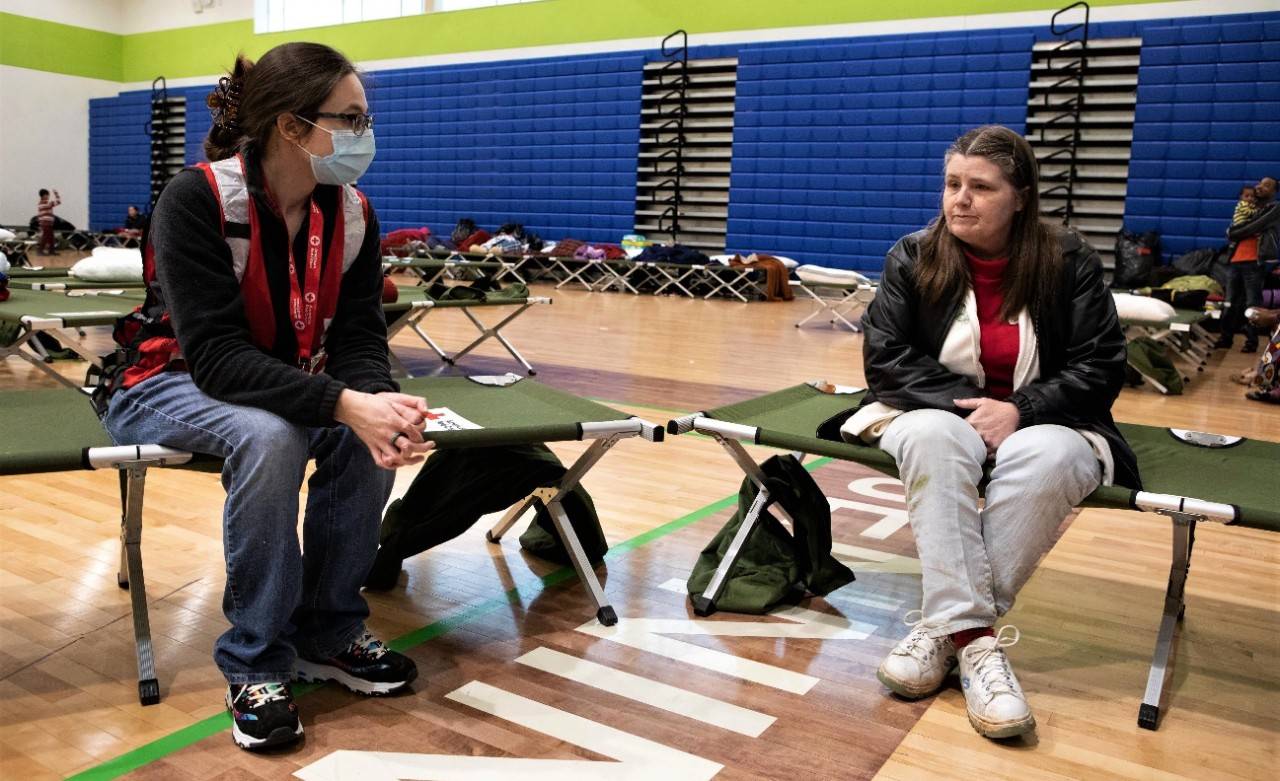 Sharon Wilson speaks to Red Cross volunteer Amy Miller and explains what happened to her the morning of the tornado. Photo by Marko Kokic/American Red Cross

With thousands of homes affected and damage spanning hundreds of miles, the Red Cross is continuing to provide help and hope after massive tornadoes left a trail of destruction and devastation across four southern and midwestern states in December.

Hundreds of Red Cross disaster workers have deployed to the hardest hit communities to assist in areas like damage assessment, feeding and disaster mental health support—with more than two dozen trained staff and volunteers from the National Capital & Greater Chesapeake Region stepping up to help. This includes Executive Director for the Delmarva Chapter, Theresa Young, who deployed to Graves and Marshall counties in Kentucky to work directly with local elected officials.

“The Red Cross recognizes the importance and value of working with elected officials,” Theresa said. “They hold a direct relationship with their communities, the people who live there, and their specific needs. They speak to the heart of their impacted communities.”

Sharon Wilson was just one of those impacted community members, displaced after she heard the tornado sirens ring through Bowling Green, Kentucky during the very early morning hours of December 11th. She looked out her window and could see a tornado warning beacon flashing in the distance. She headed the warning, ran for cover in her bathtub and hoped for the best. Within moments, her entire house began to shake, and she could hear the roar of wind and debris crashing down all around. After the tornado passed a neighbor came to the house, calling out to Sharon and asking if she was okay.

“When I got out, I saw how it had ruined my home. The walls of my bedroom had collapsed, the roof was damaged, and rain was pouring in. My front door was gone, and my living room was now an outdoor space,” she said.

Although her home of 17 years was reduced to shambles, Sharon remains thankful she wasn't injured and that she could turn to the Red Cross during her greatest time of need.

“The only thing I can do now is rebuild,” Sharon said.

Across four states and with the help of partners, Red Cross teams have already served more than 81,100 meals and snacks and distributed more than 51,200 relief items. But the work of the Red Cross is far from over.

“Our disaster workers are committed to helping for as long as help is needed," Theresa Young added. “It is a long road to recovery for these communities and if necessary, I will deploy again to help.”