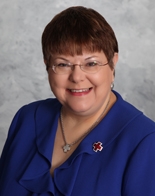 Tammy Prater has always been involved in public service.

Like many Americans, she first learned about the American Red Cross in the swimming pool as a child and at summer camp where she was certified as a Junior Lifeguard at 13-years-old.

A quest for knowledge and a subsequent desire to share that knowledge led Tammy to a professional start as a public school teacher and then onto a career with the City of Tyler as a reference librarian, where she spent 12 years.

During her time as a librarian, she dedicated her free time to volunteering with the American Red Cross chapter in Tyler until she was named the Executive Director of the Smith County Chapter in 1999. Her role expanded in 2011 to include serving as the Executive Director for the East Texas Piney Woods Chapter and the Smith County Chapter. With her new role, her desire to serve humanity in crisis, teach preparedness and build community resiliency to all the counties she serves is even stronger.

Tammy graduated from the University of Texas at Austin with a bachelor of arts degree in government.