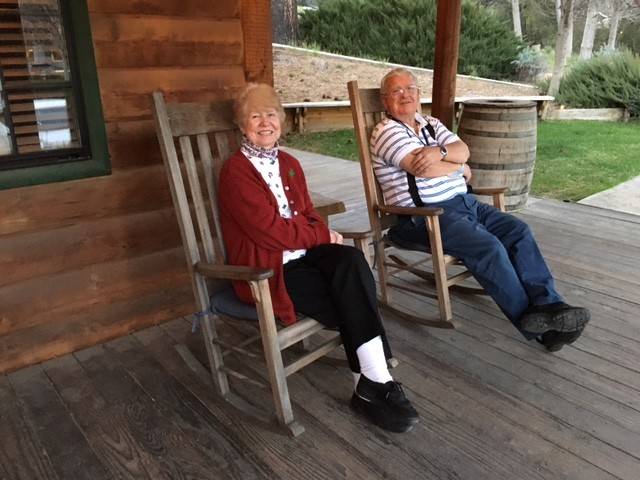 Sue is originally from Broken Bow, Oklahoma, and was raised in Fort Worth, Texas, but was living in San Diego, California, when a call went out from the Red Cross asking for volunteers to make layettes, clothing sets for newborn children. It was 1956 and Sue was pregnant with her second child when she volunteered to help, beginning what would turn into a lifelong journey with the Red Cross. As her children grew and began school, Sue and her family moved to Cherry Point, North Carolina, and eventually she shifted her focus from making layettes to working as a member of the Red Cross “Gray Lady” Service. Sue spent several years working at military hospitals assisting as needed and keeping records of hours worked by fellow volunteers.

Originally created to assist with meeting the needs of military patients during World War I, the Gray Ladies were a group of mostly women who were rigorously trained to provide non-medical care to patients in military hospitals. During the 1930s the number of volunteers in the Gray Lady Service spread across the country and, at its peak, reached almost 50,000 members serving in both military and civilian hospitals. Throughout this time, the service provided by the Gray Ladies expanded to include blood donation centers as well as disaster response. In the mid-1960s the number of Gray Ladies decreased as the Red Cross shifted to create a unified volunteer force and volunteers, like Sue, shifted to other areas of service.

As her time as a Gray Lady was winding down, Sue met and married Henry Zebick in 1971 and moved with him to Oak Harbor, Washington, where she became involved with the Red Cross at Naval Air Station Whidbey Island. It was while stationed in Washington that Sue would lay the foundation for her most important role within the Red Cross. In 1975, during the Northern Washington Flood, Sue assisted the Everett Washington Red Cross Chapter by working as a Technician (caseworker/home visitor) and follow-up caseworker. It was a learning experience for both the chapter and Sue.

“I called the station director [in Everett, Washington] and asked if she needed help. When she said yes, I went up the next day to assist with whatever they needed. The chapter had never faced a disaster like this since I had been hired, so we did what we could to help the people affected by the flooding.”

After her experience in Washington, Sue moved to San Jose, California, where she volunteered for the Santa Clara Red Cross Chapter as a member of the Disaster Action Team (DAT) and for the Disaster Operations Department of the Red Cross Western Operations Headquarters. Sue began deploying to national disaster sites where she started to develop a reputation for being a technical expert in her field. She eventually moved back to San Diego, California, in the early 1980s.

“When I first came to San Diego, they really didn’t have a Disaster Services section. They had a director who oversaw service to military families and any disasters that happened. If there was a disaster and people came to the Red Cross and asked for assistance they were assisted by the same people who provided services to the military members. But they didn’t do like they do now, where when a disaster happens they send volunteers out to the site and assess the damage and then give them what they need. There was no Disaster Action Team. People had to physically come in and ask for assistance.”

By the beginning of the 1990s, Sue was entrenched in the American Red Cross of San Diego/Imperial Counties when a new director was hired to handle Disaster Services. With several deployments under her belt from her time volunteering with the Western Operations Headquarters, Sue was a likely choice to help form and train a core team of volunteers in disaster preparedness.

“We just went every day until we got everybody trained. One of the things that we did was explain to them that a person should not have to come to us for assistance but that our people should go to the fires and other disasters to help. But we had to train them how to do that and it worked out. It was a learning process for me, too.”

Sue also recruited another trusted volunteer, her husband Henry, who joined the Red Cross volunteer ranks once he retired. Henry has volunteered with the Red Cross for more than 30 years and spends his time in the Logistics department, helping to organize the warehouse, provide supplies to shelters and much more.

Thanks to the hard work of Sue and other volunteers and staff, the American Red Cross of San Diego/Imperial Counties now has a thriving Disaster Cycle Services program and large team of disaster volunteers and caseworkers who assist families affected by disasters big and small.

“It is because of volunteers like Sue that the Red Cross has been able to provide so much help and hope for disaster survivors through the years,” said Victor Roosen, Regional Disaster Officer, American Red Cross of San Diego/Imperial Counties. “I am in awe when I think of how many lives Sue has significantly impacted, especially for those experiencing some of their during their worst days. Sue is in and out a true hero of the Red Cross movement.”

Throughout her career, Sue has held a variety of positions with the local Red Cross. No matter what her role is, Sue always goes above and beyond for the Red Cross and the clients they serve. In each role she takes, Sue brings her wealth of experience and knowledge – a priceless asset to the organization.

“When I would go on jobs I would always make sure to check in with the local chapter and would offer to give disaster training to their volunteers. They always took me up on it. The director would set it up and after work, I would just go over there and train.”

After more than half a century of service, Sue will be hanging up her red Disaster Services vest this year to focus on other things. When asked about her time with the Red Cross and what led her to stay for 63 years, she responded, “When I first volunteered for the Red Cross, I volunteered every day. I didn’t just volunteer during disasters. I was in it for the long game.”