The Central Coast Chapter serves more than 770,000 people across the counties of Monterey, San Benito and Santa Cruz.

From the seascapes of Monterey Bay to the rolling hills of Carmel to the boardwalk and beaches of Santa Cruz, the Central Coast Chapter inhabits an area of California renowned for its natural beauty. A dedicated team of staff and volunteers works with community partners, local government and donors to prepare for, respond to and recover from disasters.

Officer Hours: By Appointment Only

Office Hours: By Appointment Only 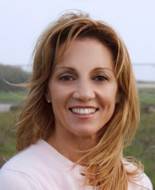 Michele Averill is chief executive officer (CEO) of the Central Coast Chapter of the American Red Cross. It's a position she has held since 2014.

"It's an honor to help the Red Cross provide support to so many community members within our three counties," says Averill, who grew up in Corralitos in rural Santa Cruz County. "Having the opportunity to do this kind of work with such a tremendous corps of volunteers makes it especially rewarding."

As CEO of the chapter that serves the residents in Monterey, Santa Cruz, and San Benito Counties, Averill oversees the work of six employees and almost 400 local volunteers who provide disaster support and other services to a population of approximately 750,000 residents. She and approximately 20 community leaders who serve on the Board of Directors strive to efficiently and effectively carry out the humanitarian mission of the Red Cross.

Before joining the Red Cross, Averill was a director in the business development branch of Telemed2u, a Roseville-based company providing diagnostic radiology and oncology services. Prior to that, Averill worked for Saint Louise Regional Hospital in Gilroy, where her positions included foundation chief executive officer and vice president of development.

Averill currently serves on the Board Quality Committee at Salinas Valley Memorial Hospital and on the Community Health Innovation's Board of Managers; as well as the TeleMed2U Board of Directors. She is also a member of the Capitola-Aptos Rotary Club.

The University Corporation at Monterey Bay

Our Mission in Action

Central Coast Stories on Our Blog

Why I Help: Edmund Tang’s Story

By Sharon J. Alfred, Red Cross, Senior Journalist Volunteer Edmund Tang started volunteering with the American Red Cross at an early age. He was just 16 years old when he became heavily involved with the Red Cross Youth Corps. During his high school years, Tang was a dual volunteer in both Northern and Southern California regions. Then he went to

A Community of Helpers

Disaster mental health services are an often lesser-known, behind-the-scenes Red Cross resource that is vitally important to the recovery of families affected by disasters. Equally vital are the disaster mental health volunteers that give their time and expertise in support of those who need them. Enter, Sharon Parker.