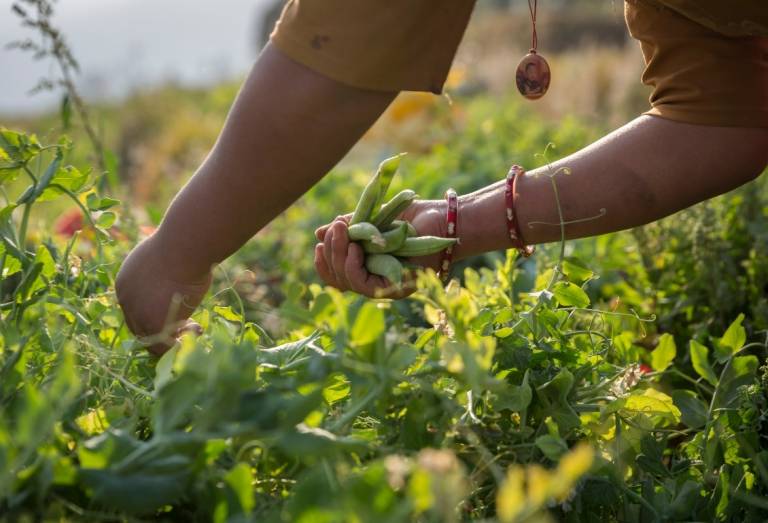 Many families in Nepal have been farming the same fields for generations. But when an earthquake shifted the water flow, they noticed that the fields no longer produced good crops. “Without water, we can’t farm. We can’t live,” remarked one farmer. To help restore their livelihoods, the American Red Cross invested in new irrigation systems for the fields. Shown here, a farmer picks ripe pea pods to feed her family and sell at the local market. Brad Zerivitz/American Red Cross 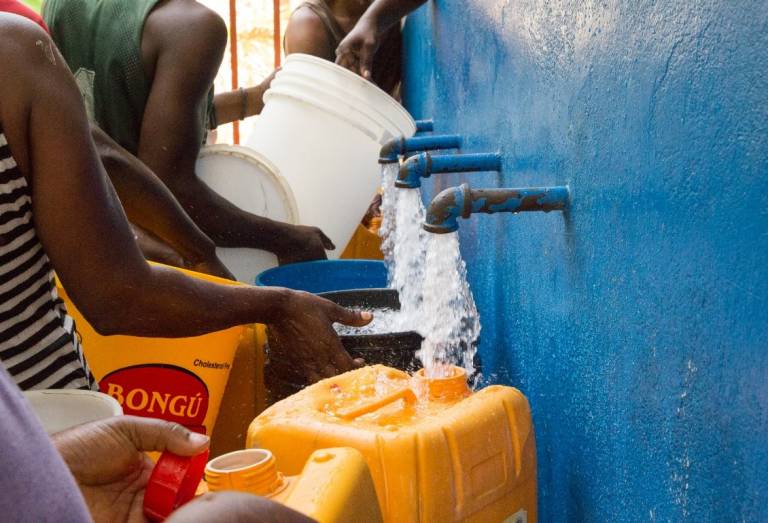 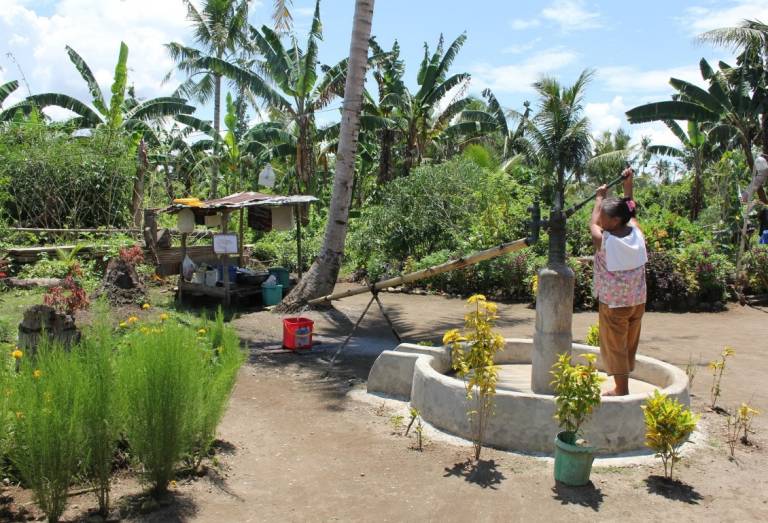 A resident of Peñalosa on the island of Leyte, Philippines, gathers water from a community water pump. When a typhoon destroyed the well near her home, she and her neighbors had to walk more than 500 yards to collect clean water in buckets. The American Red Cross has since installed five water pumps in Peñalosa, which are less likely to be contaminated than wells and are easier to use. Local Philippine Red Cross volunteers monitor the pumps and teach community members about hand washing and other water and sanitation skills that keep families healthy. Indeed, residents say that children in their neighborhood get sick less often since the Red Cross started teaching about hygiene. Niki Clark/American Red Cross 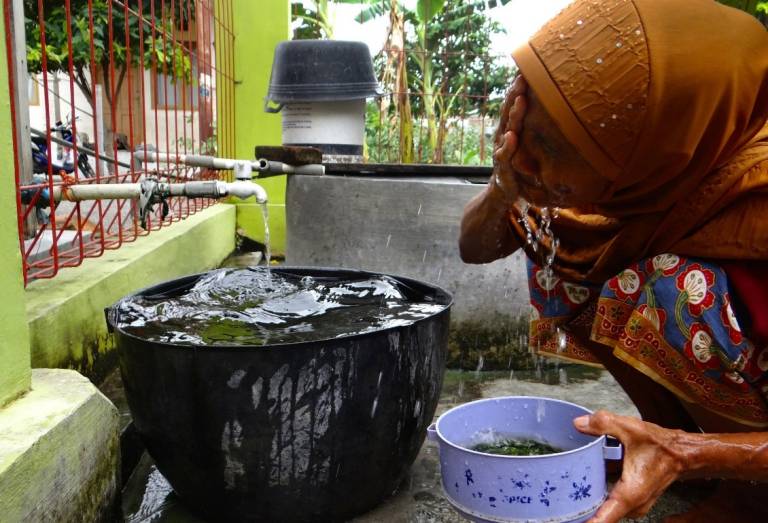 A resident of Aceh Besar, Indonesia, washes her face with clean, cool water. Her house was completely destroyed by a tsunami, but she received help. The American Red Cross connected running water and a septic system to the house. The widower works as a launderer and says she would never have been able to build a new home or install a water system if it weren’t for the help of the Indonesian Red Cross (locally known as Palang Merah Indonesia) and the American Red Cross. Jenelle Eli/American Red Cross 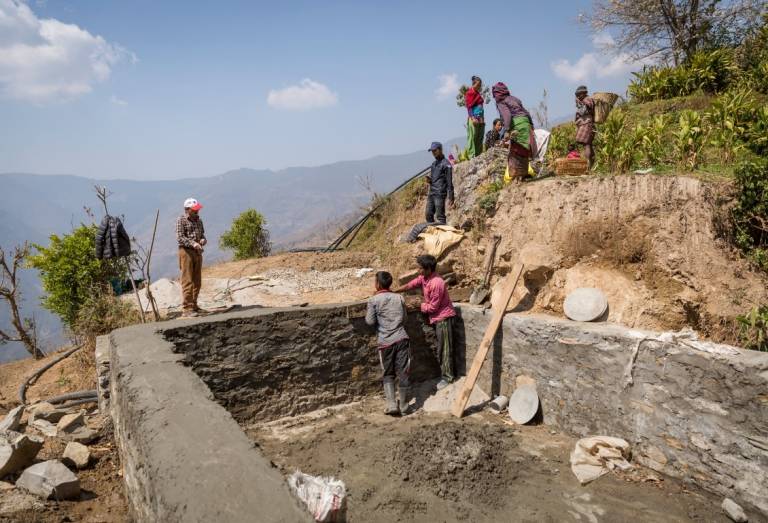 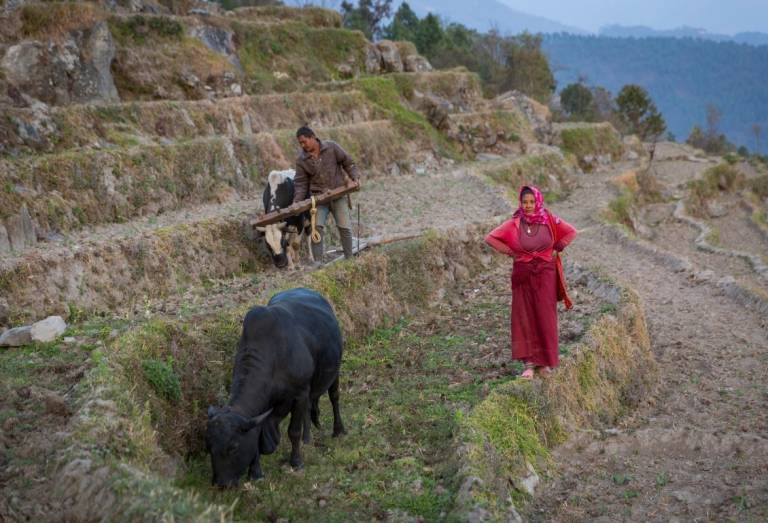 A brother and sister plow a plot of land in the terraced fields of Kaule, Nepal—an area heavily impacted by an earthquake. The two have been working these fields since they were kids and the beauty of their surroundings is not lost on them. “I’ve traveled to a lot of places and I still think my own village and fields are the most beautiful,” remarked the sister, who is a Buddhist nun. The earthquake affected water flow to the field, but the American Red Cross and Nepal Red Cross funded a new irrigation system.   Brad Zerivitz/American Red Cross

Safe and clean water isn’t easy to come by in many parts of the world. This can be especially true after earthquakes, typhoons, floods and tsunamis damage water infrastructure. The American Red Cross works with global Red Cross and Red Crescent teams to provide access to water in the aftermath of disasters, but we don’t stop there. We also make investments in communities’ water and sanitation systems so families can be safer and healthier in the long-run.

In Kaule, Nepal, water has always been scarce in the springtime. But an earthquake made the situation worse. Because of shifting land and inconsistent water, community members had a difficult time cultivating enough crops to sustain their livelihoods. Most residents lost their crops for the year after the quake, which was devastating.

“Without water, we can’t farm. We can’t live,” remarked one farmer.

As part of a project to restore food security and people’s income, the American Red Cross and Nepal Red Cross trained residents on how to construct an irrigation system and supplied the materials to bring it to fruition. As an added benefit, community members now know how to build safe, strong irrigation systems in case they ever want to expand the network in the future. The increased water flow has enabled farmers to grow basic food (like corn and potatoes) for their families and more profitable crops (like peas) to sell at the market. Seemingly small gains can make a huge difference in the lives of people who depend on irrigation for their livelihoods. “The mustard greens are a bit taller this year,” noted one resident.

In the Philippines—one of the top five most disaster-prone countries in the world—water is both a basic human need and a source of vulnera¬bility. The American Red Cross and Philippine Red Cross are active in villages like Paglaum, where rain wreaks havoc on a regular basis: flooding homes, cutting off road access and even causing health problems.

Teams have dredged and widened the local canal, which has already decreased flooding. Construction workers have laid the groundwork for retaining walls to prevent future flooding and erosion.

“I’m deeply thankful for the drainage work the Red Cross is doing in our community. Our houses used to flood and they don’t now. I’m crying because it’s a great help not just to me, but to the whole community,” remarks a mother who lives near the canal.

Paglaum has seen its fair share of rain. When Typhoon Haiyan (locally known as Yolanda) struck in 2013, most of the houses were damaged or destroyed. The American Red Cross has helped families to rebuild from the storm—funding shelter improvements, water and sanitation interventions, health outreach and more. The improvements aren’t simply bandages. Instead, they’re investments in Paglaum’s future.

“We are more aware of our safety because of the Red Cross,” says one resident, who decided to become a volunteer herself. She has gone door-to-door donning the Red Cross emblem, alerting her neighbors of health threats and educating them on how to avoid diseases—like mosquito- and water-borne illnesses.

In Haiti—where families are still recovering from a massive earthquake that struck in 2010—safe drinking water isn’t a given. But thanks to investments in infrastructure, families are increasingly able to access safe water and sanitation.

The American Red Cross has worked with local and interna¬tional partners to prevent the spread of cholera in Haiti since 2010, reaching more than 3.6 million Haitians. Activities aim to combat the threat of cholera by providing rapid treatment for those already infect¬ed and addressing the underlying conditions in Haiti that allow cholera to spread. The American Red Cross has established and resourced specialized cholera treatment units, made significant improvements to water and sanitation systems, and implement-ed large-scale public education campaigns that encourage safe hygiene practices.

The American Red Cross invested $47 million in water and sanitation in Haiti following the 2010 earthquake. These funds have been used to help construct the country’s first wastewater treatment plant; build latrines and handwashing facilities in schools; and fund eco-friendly toilets for families who were previously at high-risk of disease.

Water is essential to human life.

The American Red Cross, in partnership with the global Red Cross and Red Crescent network, strives to prepare at-risk communities to withstand and respond to disasters before they strike as well as provide access to safe water and sanitation in the aftermath of an emergency.