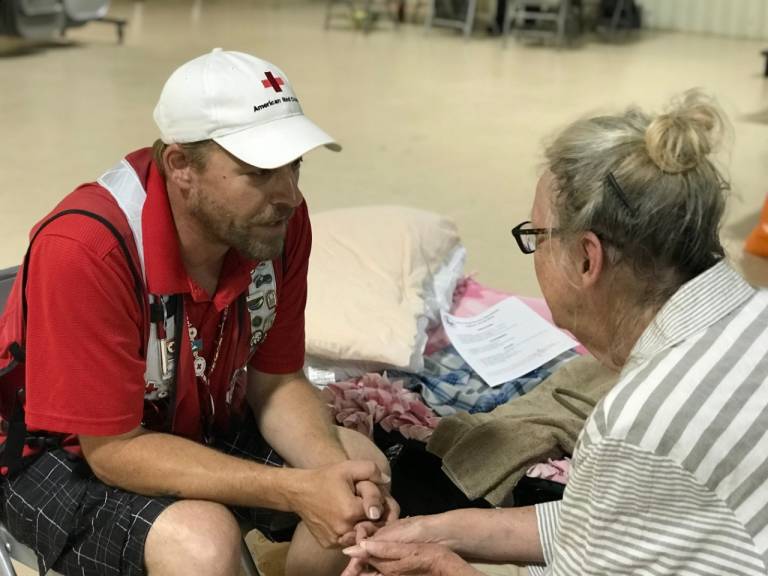 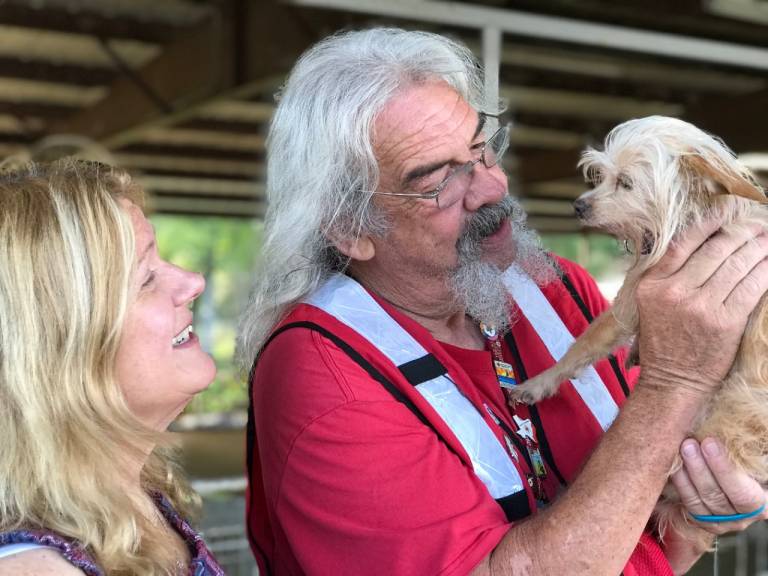 People in Texas are still recovering from catastrophic flooding which occurred several weeks ago when Tropical Depression Imelda dropped several feet of rain in some parts of the state. The American Red Cross remains on the ground, providing shelter, meals, relief supplies, helping to assess the damage and assisting people as they plan their next steps. Following are two stories from Texas:

Shirley Bryson was born and raised in Texas and was once an employee for NASA long before women were part of the payroll. She knows a thing or two about strength in the face of personal challenges. It’s this strength she has tapped into again and again, not only during the recent flooding from Tropical Depression Imelda, but from Hurricane Harvey several years ago as well.

“Last Wednesday night, I thought ‘here we go again,’” she said, pushing back her soft gray hair as Red Cross volunteer Andy Barker sat by her side. “I’ve lived in this county for decades and I’ve seen roughly 15 hurricanes come and go. With Harvey, I was stranded on the front porch with my two dogs until rescue crews came. That time, I was able to live with my sister-in-law, but this time, she flooded, too.”

Bryson had repaired the damage to her Chambers County home from Hurricane Harvey not long before meteorologists started tracking Imelda. She thought she had escaped the worst of it until water started seeping into her home during the early hours of September 19. Emergency responders found her again on the front stoop (her elderly dogs passed away last year) and air-boated her to a nearby school. Shortly thereafter, a bus brought her to the Red Cross shelter, where she met Barker and other compassionate volunteers.

“It’s my honor to serve others in times of disaster,” said Barker, a longtime Red Cross disaster volunteer who flew in from Washington state to help run the Chambers County shelter where the Texas native was housed. “People like Shirley are what our mission is all about. If we can provide some comfort during a terrible time, we want to do it.”

Twice widowed and a career woman even in her golden years, Shirley manages to laugh at what would make others cry. “I forgot to tell you my roof blew off during Hurricane Rita,” she grins. “But I learned a long time ago that life is an adventure. Even with Imelda, as horrible as it is, I have so much to be grateful for - my health, my life and people like Andy who have made this situation better with warm beds, food and kindness.”

When someone nearby called her a “steel magnolia,” she nodded her head. “I like that! I’m a steel magnolia. But we all need help no matter how strong we are. The Red Cross has been that help to me during Imelda, and I will never, ever forget it.”

Becoming a Red Cross volunteer was the last thing on Margie Carroll’s mind in the early hours of September 19, as she clung to her dogs atop a mattress floating on sewage water in her new Winnie, Texas home. Yet a week later, recounting her harrowing rescue and the kindness of volunteers who came to her aid in a time of grief and fear, she was certain this would be a goal she’d pursue.

“My mother, adult brother with autism and I moved to Texas from Ohio just two months ago,” Carroll explained at the Chambers County Red Cross shelter while her tiny rescue terrier, Sadie, sat on her lap.

“We knew the area was prone to floods, but not like this. My mom wanted to be near the beach and we thought our Winnie home was perfect. She suddenly passed away three weeks ago, and I was headed to her memorial service when it started to rain.”

Carroll chose to stay home with her brother, James, due to road conditions. Before long, water started seeping into the garage and came through the doors at such a rapid pace that they couldn’t open the doors and became trapped in their own home.  “I’m a rescue dog volunteer and we have seven {dogs},” she recounted. “I grabbed them all and climbed onto the mattress. James couldn’t get up there due to his size, so he stood in that dirty water for four hours and calmed the dogs while we prayed for rescue.”

Her friends called emergency responders and activated their rescue. Her brother, who experienced cardiac and other medical issues, was taken by ambulance to a local hospital and Carroll was air-boated – with her dogs – to a nearby school. From there, she and her dogs were delivered to the Red Cross shelter.

Despite the grief of losing her mother, new home and everything in it compounded by worry over her brother’s health, Carroll smiles as she tells her story. “The compassion shown to me by every Red Cross volunteer was like a warm blanket wrapped around my heart. They offered me a place to stay, food to eat and had partners to care for my dogs. A veterinarian even stopped by to check on all the animals housed behind the shelter.

Margie has a long road before her as she prepares to depart the shelter, collect her brother, find temporary housing and slowly begin to rebuild their lives. One thing is for certain: Her future will include the Red Cross.

“I’ve always been an animal helper and that won’t stop. But I’ve learned something important this past week, and it’s that I want to be a people helper too,” she said. “I can’t repay all these wonderful people who came to our aid during the darkest of times, but maybe I can pay it forward. Yes, I am going to do that. I’m going to be a Red Cross volunteer.”

Amid a Flurry of Global Disasters, Red Cross Helping Around the World
.type=article.p=1.t=redcross%3AEmergency-Type%7CFloods.f=service%3Adisaster-relief-and-recovery
View All
Donate Now