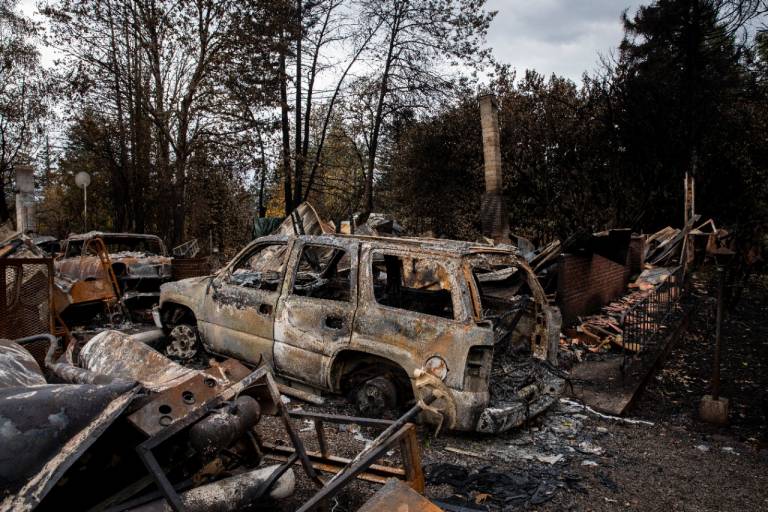 The damage done by the Oregon wildfires, in Gates, Oregon in September. Red Cross photo by Scott Dalton. 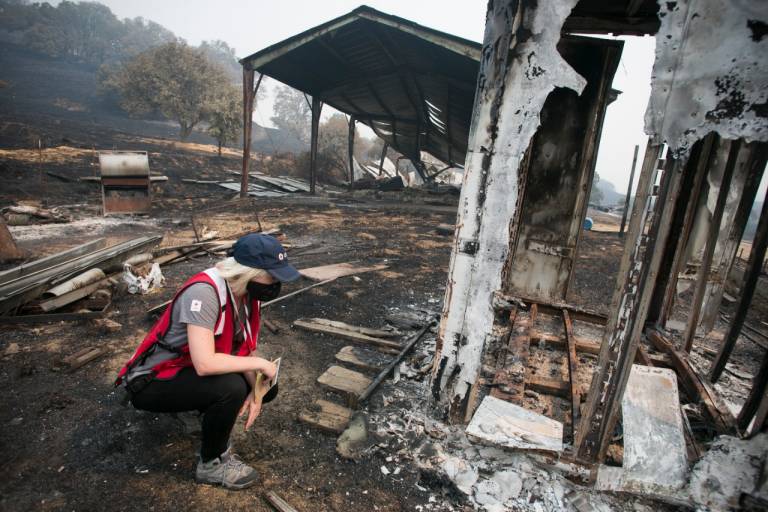 A property charred by a wildfire in Vacaville, California. Red Cross photo by Dennis Drenner. 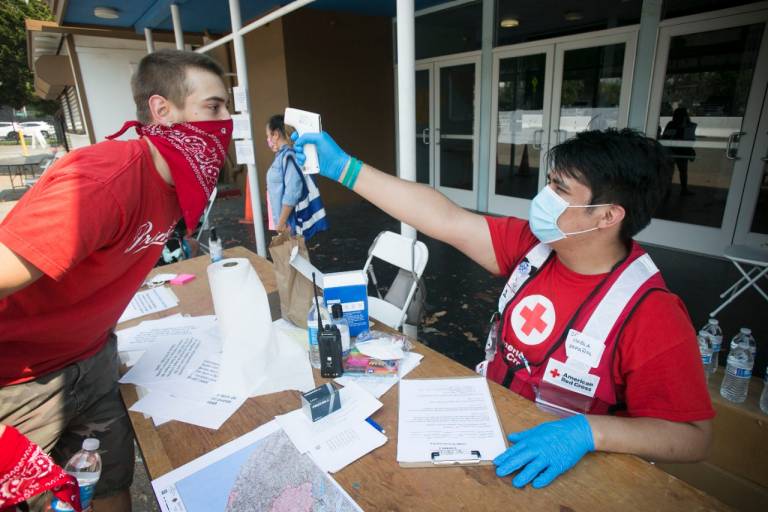 A wildfire evacuee has his temperature checked by a Red Cross volunteer before entering the Red Cross shelter in Santa Rosa, California. Red Cross photo by Dennis Drenner. 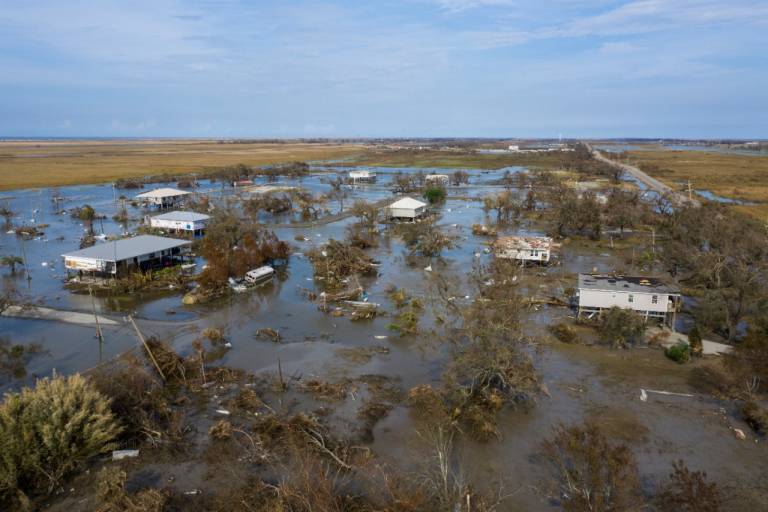 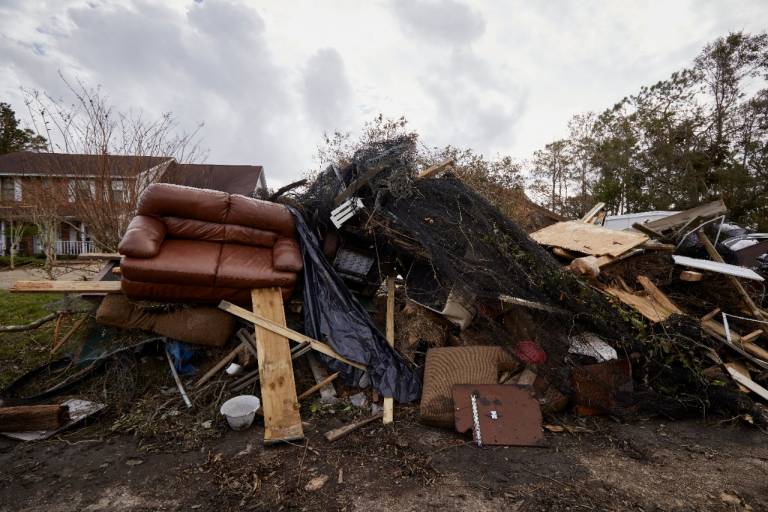 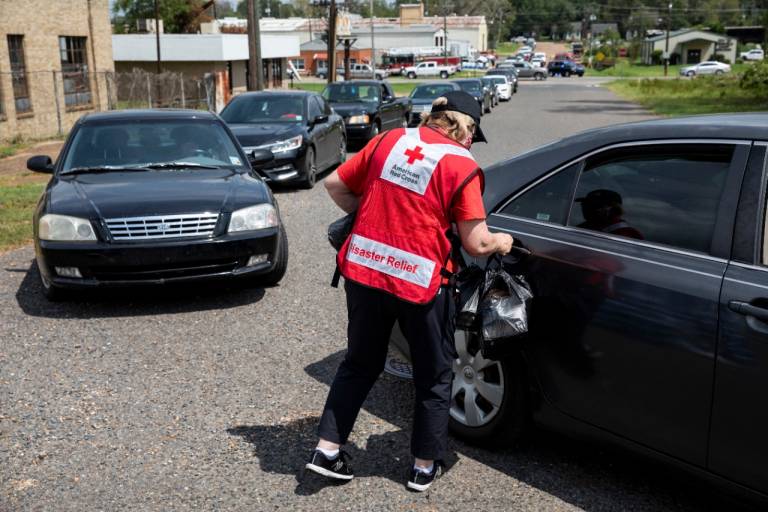 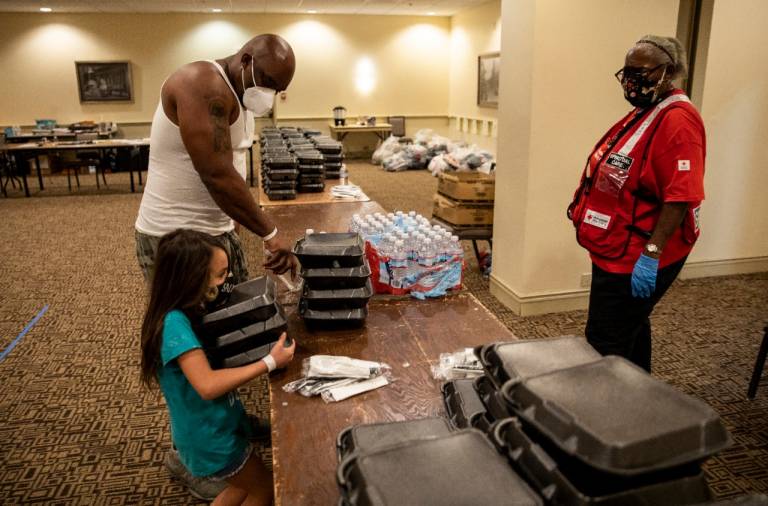 Due to Covid-19, many evacuees were sheltered in hotels in 2020. Here meals are distributed at a hotel in New Orleans after Hurricane Laura. Red Cross photo by Scott Dalton.

2020 has been a year for the record books. On top of a pandemic which (as of December 9) has claimed more than 286,000 U.S. lives, millions of people in this country faced a never-ending string of disasters from the devastating wildfires out west to the almost constant hurricanes which pummeled the Gulf Coast.

These disasters during the coronavirus pandemic led to families spending more nights in emergency lodging in 2020 than any other year in the past decade. Altogether, the American Red Cross and partners provided more than 1.3 million overnight stays this year.

"Families are overwhelmed coping with the greatest number of billion-dollar disasters in a single year — on top of the coronavirus pandemic," said Gail McGovern, president and CEO of the American Red Cross.

Here are stories from some of the survivors of these disasters, and some Red Cross volunteers who left their homes to help.

Patrick Fraser, North Fork, California, was forced to evacuate due to the Creek Fire. “The helicopter came up over the house, telling everyone to get out,” he said. “I found out that Red Cross could help people out. We drove to Mariposa and they put us up in two rooms, and they were awesome. They brought snacks and their little goodie bags. They were super nice. Every day we went from Mariposa to Minarets High School to care for our animals. At first I didn't even know the Red Cross helped like this. Like most people, I said okay we're on our own so I have to figure something out, but when they ended up putting us up, that was awesome. After about a week we were able to go back to Oakhurst in a hotel and then we finally got to go home. It was an experience I don't want to do again.”

Patricia Wilson lives in North Fork, CA, and was also forced to leave her home with her husband and pets as the Creek Fire threatened. “The day before the evacuation I started realizing I should get some things together,” she said. “But you have it in the back of your mind, please don't let it happen. Please don't let it happen, let them find a way to stop this. The fear you go through is very stressful and scary all at once. I’ve never been through it before so it was new, on top of the pandemic. My mom told us the Red Cross was at the Community Center, that they could help with the motel room. I guess I was just so tired I just didn't believe anyone's going to help us, but it was true. I almost cried. I couldn't believe that they could do this (provide emergency lodging).”

Red Cross volunteer Christine Wilson responded to several of the California wildfires, both on the ground and virtually. “It started with the Stagecoach Fire here in Kern County at the beginning of August. That's when it started and then, like everyone else in the Red Cross, it has been non-stop ever since,” she said.

Wilson said helping during the pandemic was okay with the safety protocols in place like face coverings, distancing and extra cleanings.” I really enjoy being deployed because I get to interact in person with someone in need, to show them compassion,” she said. “We've been so closed up and estranged from everyone. It was a wonderful opportunity just to be able to do that in person.

“When I rethink about everything that happened this year, especially as part of the volunteer screening team, the sheer volume of people wanting to volunteer was massive, impressive. That's what I look back on as a high point. While there are opportunities on the front lines, there are so many chances to have a volunteer career in a virtual world. There's a place for everyone in the Red Cross, regardless of your circumstances.”

Volunteer Mustafa Al Lami helped with back-to-back disasters in Louisiana. “Louisiana had a very busy hurricane season this year,” he said. “We started with tropical storm Cristobal in June and then had five hurricanes almost back to back from the end of August to the end of October.”

“I have had a totally different experience this year with the most active hurricane season on record during a pandemic. I’ve never seen hurricane seasons like this year. I met with disaster survivors that got displaced twice or three times this year.

“The pandemic didn’t stop the American Red Cross from helping those in need. At the Red Cross, we love to be very close to those impacted to give them a comforting hug or sit closely and listen to their story. Now we’ve had to shift those hugs to air hugs.”

Volunteer Patty Albin responded to the wildfires in Oregon. “The experience of seeing my neighbors and hometown burning, and then burnt to the ground, was chilling.  For the first time, my home (southern Oregon) was the site of a major disaster and a major response by the Red Cross,” she said.

“I began this response by supporting a wildfire evacuation point. The second week I was driving into the burned-out affected areas handing out supplies to residents trying to recover personal items from the debris. It was difficult to stand with someone who was devastated, their home is now ashes and try to give them hope. But we did, because that’s what we do. We were doing all this while dealing with a pandemic and trying to keep people safe and healthy."

”The pandemic added another layer of work and attention to volunteering. Red Cross volunteers always wore masks, used hand sanitizer, and maintained social distancing. Temperatures were taken when entering buildings. Masks and sanitizer were given out along with clean-up supplies to folks that needed them. My husband and I volunteer together, and we have been with the Red Cross for more than five years.  This is truly the “weirdest” year we’ve seen.”

Volunteer Kallie Bunnel deployed to Texas from Utah to help after Hurricanes Laura, Marco and Sally. “I began volunteering with the Red Cross at the beginning of 2020. As a member of the Disaster Action Team within the Red Cross, I get to be part of the frontlines both in my community and on deployments to other states during an emergency.

“My deployment in response to Hurricanes Laura, Marco and Sally was an experience I will never forget. I left during the school semester, so when I wasn't volunteering I was studying for my classes. Because I am going into nursing school, I had the opportunity to shadow the nurses in the disaster health services team with the Red Cross. We helped many of the evacuees get necessary medical supplies such as wheelchairs, walkers, blood pressure cuffs, glucometers, etc. We also worked with local pharmacies to get the evacuees medications that were left at home. It was a very rewarding experience to help provide essential supplies to those in need while learning how the Red Cross works.

“One of the most rewarding parts of disaster relief is taking the opportunity to talk to the evacuees. One in particular from Lake Charles, Louisiana told me that his nickname was "Butch and that his wife had died just five months prior to the hurricanes. His house was completely destroyed. He said that all he cared about was that his daughter and grandchildren were with him. This experience meant so much to me because it reminded me what matters most in this life.”

Amid a Flurry of Global Disasters, Red Cross Helping Around the World
.type=article.p=1.f=service%3Adisaster-relief-and-recovery
View All
Donate Now