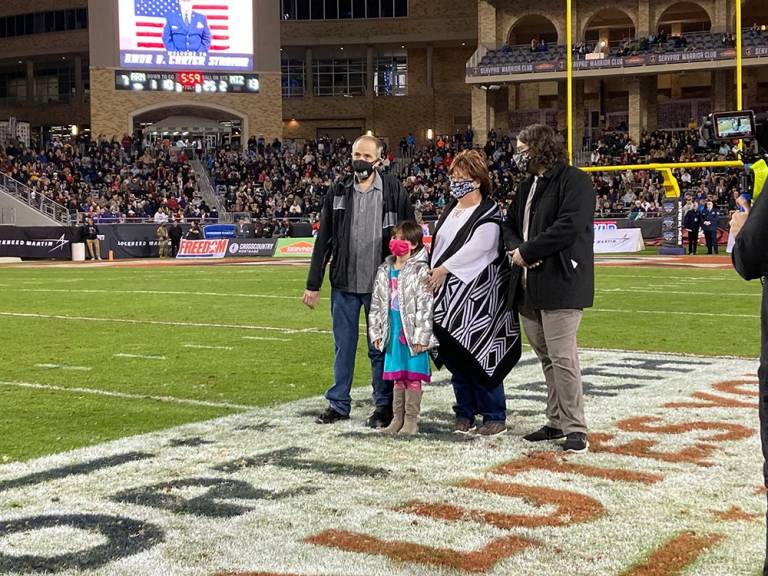 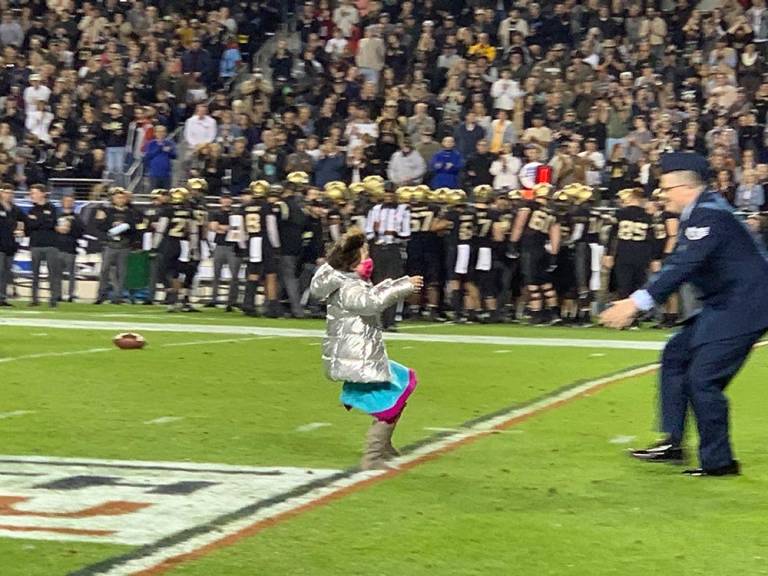 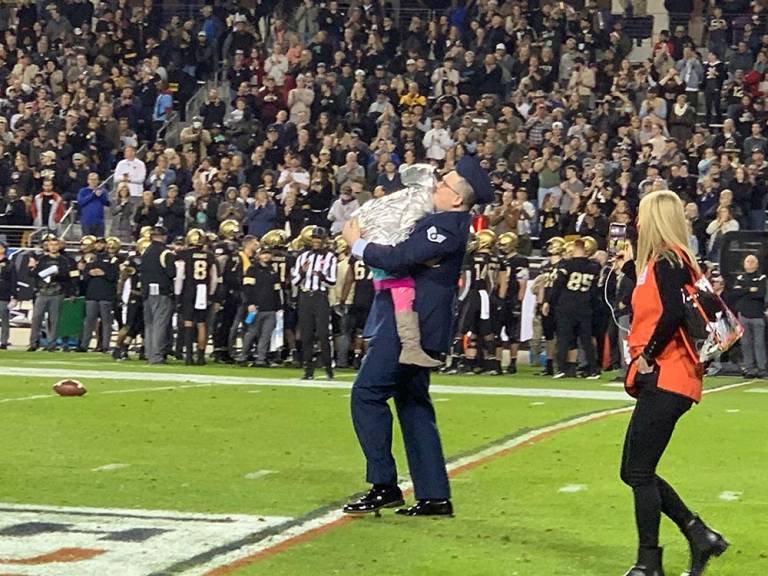 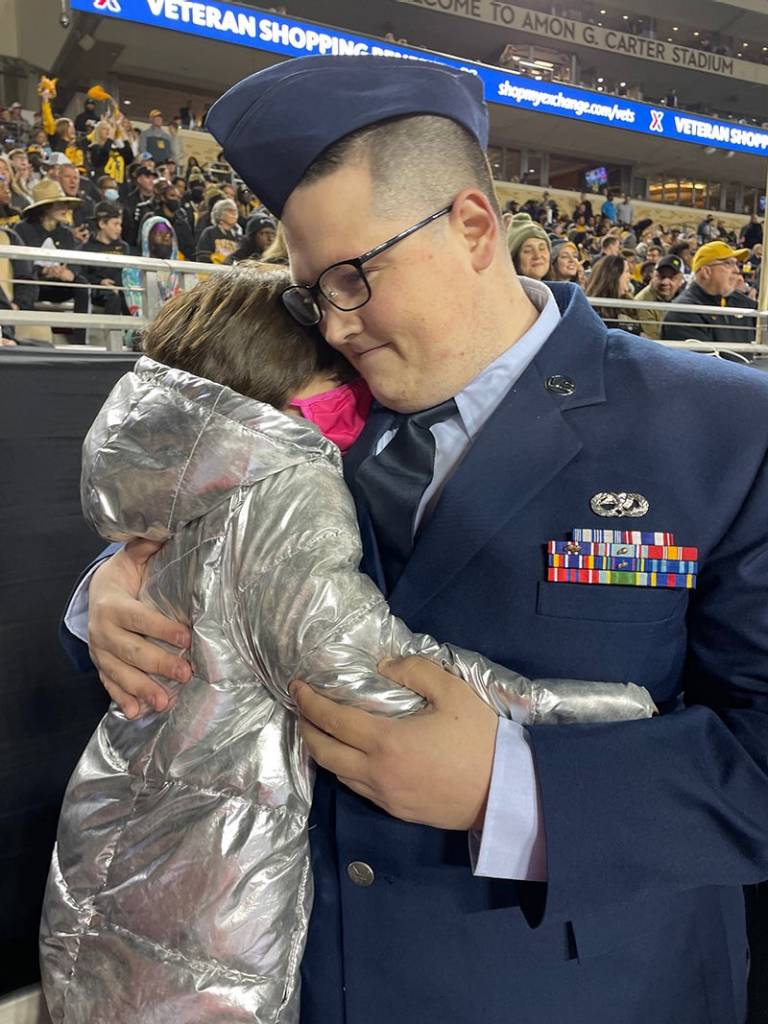 The American Red Cross orchestrated a surprise reunion between a service member stationed overseas and his stateside family at the Armed Forces Bowl in Fort Worth, Texas. On the field, the Army Knights narrowly defeated the Missouri Tigers 24-22. But all eyes were on the heartfelt reunion just before halftime between Air Force SSgt. Jared Lenamon and his family, including his eight-year-old daughter.

“The opportunity to surprise my family and come home for Christmas is just amazing,” said Jared, who is currently stationed in the United Kingdom. Due to back-to-back overseas assignments, he hasn’t seen much of his family since 2017.

According to event organizers, reuniting a service member and family is an annual tradition and is often the highlight of the game. The Red Cross, in conjunction with ESPN and American Airlines, selected the service member and orchestrated the logistics to make the reunion happen.

Family in Texas
Jared’s parents, Melanie and James Lenamon, who live in neighboring Mineral Wells, Texas, were pleasantly surprised to hear from the Red Cross earlier this month. The family was told that they received complimentary tickets to the Armed Forces Bowl. At the event, they could expect a special video message from their son as part of a “Salute to the Troops.”

“We miss him so much and this seemed like such a nice opportunity for military families, especially during the holidays,” Melanie said.

As a military mom, Melanie says that she’s so proud of Jared’s service. “I was a military kid and know the value of service. We have such pride for the work he’s doing overseas,” she said.

The family eagerly traveled to the game for their video. James said that the family loves football and the entire family was eager to see Jared on the big screen. Little did the Lenamons know, the event organizers had a much bigger Christmas present up their sleeves.

With Service Comes Sacrifice
As he was getting ready to leave the UK, Jared packed a few presents including toys for his daughter, zipped up his bags and kept his mouth zipped too.

“I know that keeping my trip secret is all part of the fun,” he said.

Jared says that it was hard not to tell anyone — especially his daughter, Aria. He says that he loves his current job, where he serves as a line delivery crew chief, ensuring the safe delivery of munitions to the flight line to be loaded on Air Force fighter jets.

“But there is no question that being apart from Aria has been the most challenging aspect of my military career. I’ve missed a lot of her growth. I try my best to FaceTime but it’s hard to serve so far away,” he said.

Additional family challenges have been tough on him too. Recently, Jared’s father, who is Type-1 diabetic, has been battling stage four abdominal cancer. “It’s been hard for my family and my dad has had multiple surgeries including a partial foot amputation,” he said.

“The holidays and living far away make you think about your family and appreciate them,” Jared said.

Game Time Reunion
At the game, the family settled in to watch football and wait for their special onscreen message. All the while, event organizers kept Jared hidden. Just before halftime, the family was escorted down to the field to watch the big screen front and center.

As they were watching the video play, Jared snuck onto the field. Suddenly, smiles turned to tears of joy when they saw each other. The made-for-TV moment came complete with Jared and Aria running to embrace.

On the field with the cameras rolling and the crowd watching, Melanie said that she was in shock. “I can’t believe this happened,” she said.

“Aria has missed her daddy so much. She knows that he’s working hard overseas, but it is still so hard on her. To have him here is just the best gift we could have imagined,” Melanie said.

Jared’s looking forward to spending the holidays at home and plans as much quality time as possible with Aria. “I’m so grateful to the Red Cross and will cherish every moment spent with my family. They are the most important thing in the world to me,” he said.