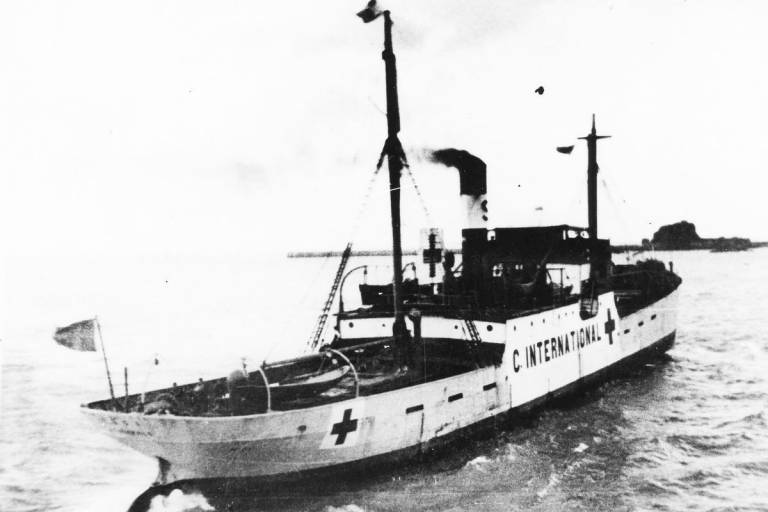 The SS Vega arrives in the Channel Islands, bringing essential food and other items from the Red Cross. Photo dated 1944-1945 courtesy of The Jersey Evening Post, a newspaper on the Island of Jersey in the English Channel. 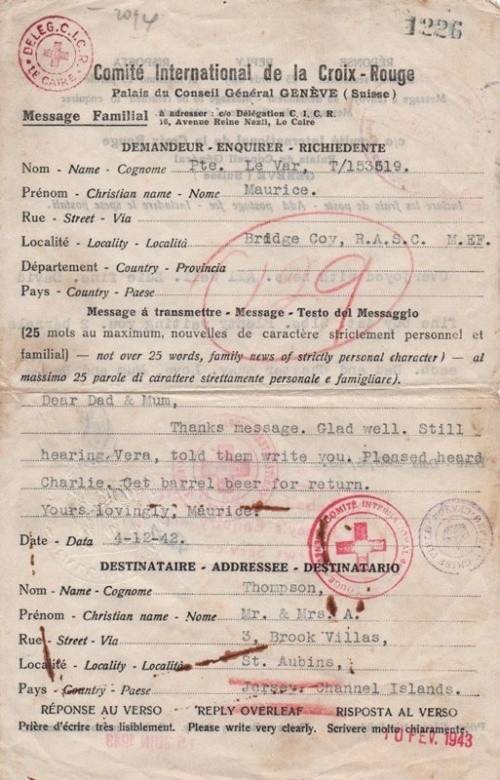 This picture shows a Red Cross message, the only way people on Guernsey could communicate with the outside world. 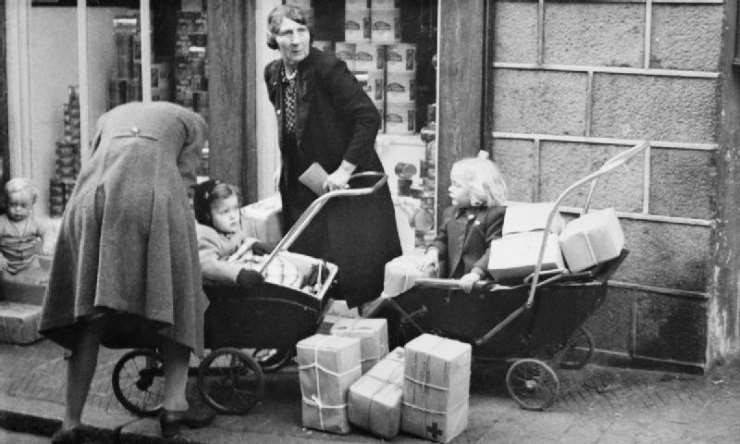 In 2018, Netflix premiered a popular film, “The Guernsey Literary and Potato Peel Society,” a story about a London writer and her connection with the residents of the island of Guernsey in the English Channel after learning what they endured during the World War II German occupation of the island.

During that difficult time in Guernsey’s history, the Red Cross played a part in helping the islanders.

Guernsey is a British Crown Dependency island off the coast of Normandy. The second largest of the Channel Islands, it was occupied by German Forces from June 30, 1940 until liberation on May 9, 1945. The Channel Islands were the only part of the British Empire to be occupied by Nazi Germany during the war.

RED CROSS MESSAGES HELPED DURING SEPARATION Prior to the occupation, about half of the Channel Islands population, mostly school children, were evacuated to the United Kingdom. The evacuees were away from the islands for five years, assisted by many organizations, including the Red Cross.

Houses were abandoned by those evacuating. Some gave away furniture and belongings and others simply walked away, leaving dirty dishes in the sink and food on the table. People could only take one suitcase and very little money.

Once the German forces took over, the islanders were cut off from outside communications, except through the Red Cross. All messages were routed via the International Red Cross headquarters in Geneva, Switzerland. The islands exchanged about 1 million messages.

The organization provided message forms on which islanders could communicate with family and friends who were outside the island. To ensure that the service was maintained for humanitarian reasons, both sides agreed that all messages would be read by both German and English censors. This was to ensure that no secret military or coded information was being sent via the forms. They were intended for non-military, civilian messages only. In May 1941, the first 7,000 arrived in England

Messages took anywhere from a few weeks to several months to get from the island to England and back again. At one point, islanders were not permitted to write to relatives but could write to friends. The number of messages that one could send was limited, and replies had to be on the back of the original message. To islanders, this link was invaluable. Messages ceased shortly after June 6, 1944, when the islands were cut off and isolated.

HARSH CONDITIONS ON GUERNSEY Locals had most of their lands, belongings, food and freedom taken away. From changing the clocks to reflect the time in Germany to restricting activities such as fishing, club meetings and the singing of patriotic songs, islanders had to follow these new laws or face being arrested or deported.

The biggest challenge was finding enough food and resources to sustain them. Until 1940, most were imported. As the occupation went on, rations lessened and basic supplies like flour, matches, tobacco and vegetables ran short or stopped entirely. Thousands of German troops and foreign workers only made the shortages worse.

RED CROSS SENDS HELP By the winter of 1944, the residents were starving. People grew vegetables on any piece of ground they could find. In early November, the bailiff of Guernsey was given permission by the military to contact the International Red Cross about the deplorable conditions on the island. The Joint War Organization of the British Red Cross and Order of St. John opted to send help soon after.

The SS Vega, based in Portugal, had been chartered by the International Committee of the Red Cross in 1939 for relief activities. The ship was dispatched to Guernsey on December 20 and arrived at the island on December 27, carrying as many as 460,000 Red Cross parcels of food and basic necessities.

Islander Herbert Nicholls in an interview described the ship’s arrival. “There was rumors all the time, you know, and there was talk of a ship coming, then it arrived, and it was there with the big red cross on, red and white. That was the excitement, everybody was waiting for their Red Cross parcels.”

The SS Vega delivered food parcels, diet supplements for the sick, salt, soap, cigarettes, medical and surgical supplies and some clothing for children and infants.

The Vega visited the islands six more times with the last being about a month after liberation in May of 1945, before a regular ferry service was reinstated.

2020 marked the 75th anniversary of the liberation of Guernsey. What happened during the occupation years is not forgotten. On May 9, islanders celebrate Liberation Day, a day to commemorate freedom and remember those who lived through the harsh times of the war years.