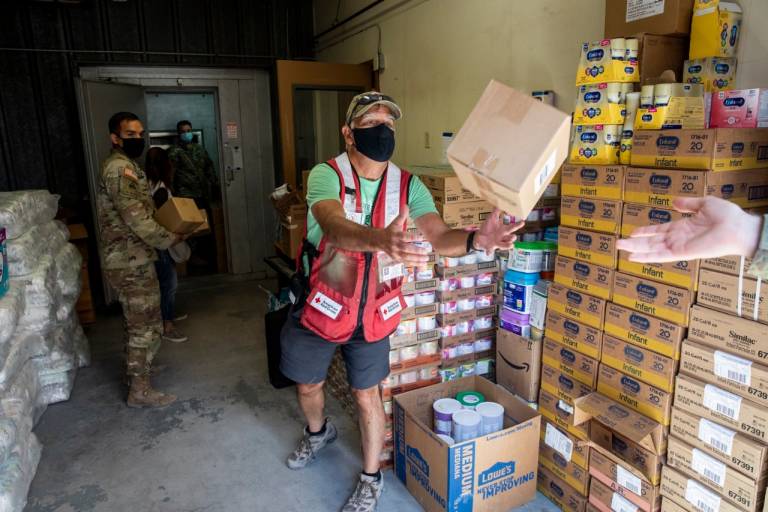 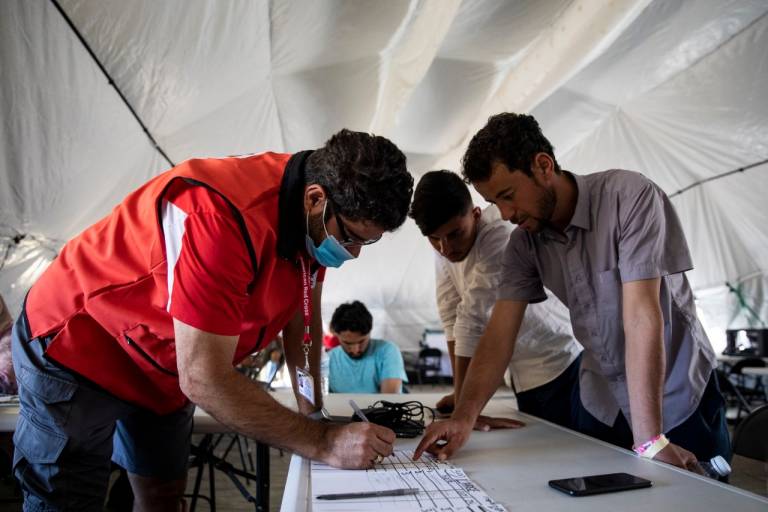 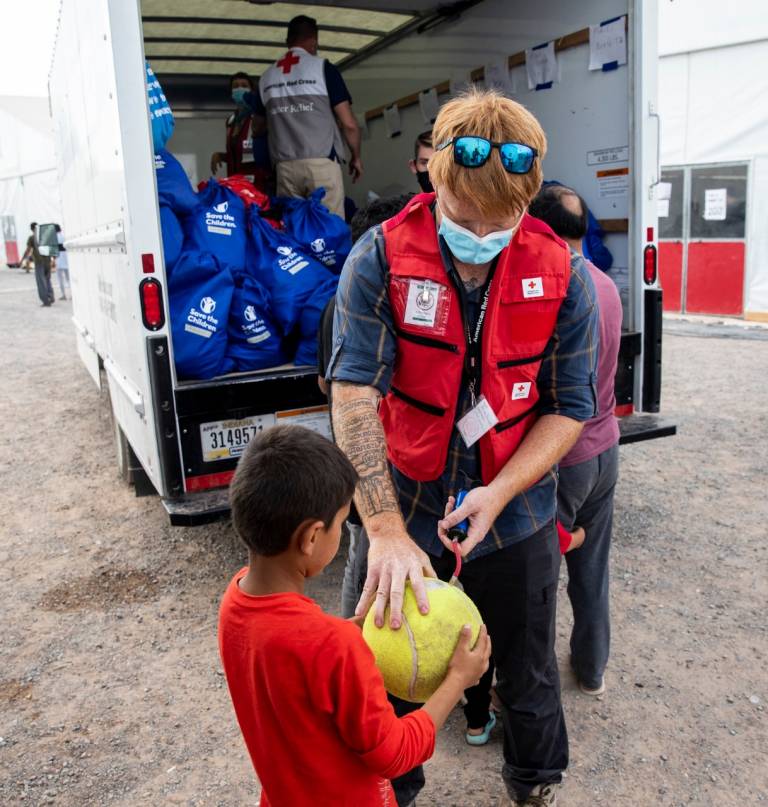 It’s been one year since the withdrawal of U.S. troops from Afghanistan and the mass exodus of refugees. As the crisis unfolded, the American Red Cross was there to support the needs of the most vulnerable. Red Crossers supported repatriation and evacuation efforts for over 124,000 people at U.S. military bases both in the United States and around the globe. The Red Cross was there to provide comfort, care and a level of normalcy for families facing unimaginable upheaval.

When the Department of Defense (DoD) requested American Red Cross support to temporarily care for evacuees being sheltered at military sites in the United States and at military bases abroad, more than 800 Red Crossers answered the call — many of whom were veterans, military spouses and active-duty service members.

Veterans and Service Members: A Deeply Personal Mission for Many

Rolling up their sleeves, Red Crossers like Cory Paul felt a deep personal connection to the mission. Paul, who serves as the Executive Director of the Greater Columbus Chapter of the Red Cross, is a veteran who served with the Army National Guard and was deployed to Afghanistan in 2013. He said that the work with Afghan refugees at Ft. McCoy in Wisconsin was some of the most important service of his Red Cross career.

While delivering care across the base, Paul said he came to know many at the camp, including a group of elderly men. One day, they stood up together and placed their hands on their chests as he walked by. “I knew from my experience in Afghanistan that they were showing me their symbol of thanks and respect by placing their hands over their chests. It touched me in a way that I’ll never forget.”

Paul says he’s proud of the role he and his colleagues played in meeting the humanitarian needs of the crisis. “As a veteran, it’s doing my soul a lot of good to give back a little bit, to listen and provide comfort to people who have experienced a lot of trauma,” Paul said.

Red Cross volunteers and military spouses Erika Ellsworth and Yuki Hwang were motivated by the children of the crisis. Like hundreds of other military spouses around the globe, they pitched in to assist with the humanitarian crisis. At bases in Germany, Ellsworth and Hwang collaborated with Red Cross and base officials to build a robust and highly structured Child Engagement Program for Afghan children.

The Child Enrichment Center provided structured play and therapy to more than 1,000 children on Rhine Ordnance Barracks. With 20-minute sessions that ran throughout the day, the center became the place to be on base. Hwang and Ellsworth were particularly moved by their fellow spouses and service members who helped with the center.

Both spouses say the children’s reliance is at the heart of their work. “Even though the kids did not speak English, we figured out a way to communicate this concept. We had a series of listening prompts in Dari and one child in each group would eventually get the concept and translate it all. You could almost see the lightbulb go off and the idea would quickly spread among the children.”

They say that what the children most needed during their temporary stay in Germany was time and attention. “They needed a safe space to express themselves and what they were feeling. Creating moments was our most important job,” Ellsworth said.

Today, the humanitarian needs in Afghanistan remain high. A deadly 6.1 earthquake in June caused additional heartache and destruction as the country struggles with many complex problems — including conflict, extreme drought and the COVID-19 pandemic. Unsafe living conditions and acute food shortages, continue to impact the people of Afghanistan.

“Before the quake struck, the country was already struggling with repeated crises and more than half of the population was in need of humanitarian assistance. The people of Afghanistan have already been through so much,” said Susan Malandrino of the American Red Cross.

The country’s drought crisis has fueled an economic crisis in a country where agriculture is critical for people’s livelihoods and the mainstay of the economy. More than 70% of the population lives in rural areas and around 80 percent of livelihoods depend on agriculture. Without food or income and facing increased uncertainty, tens of thousands of drought-affected families have left their homes, seeking food and shelter in relief camps. This internal displacement has dramatically compounded in recent months, with nearly 700,000 people internally displaced this year and in urgent need of assistance, of which some 80% are women and children. 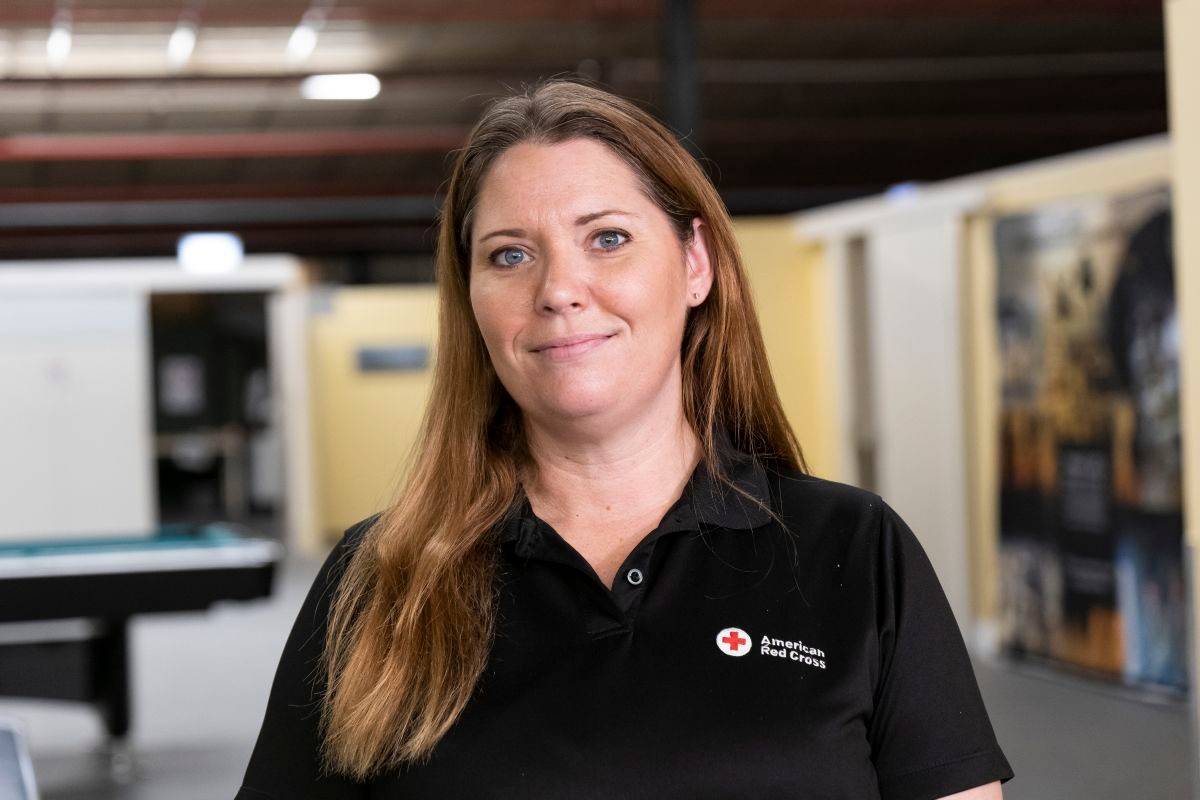 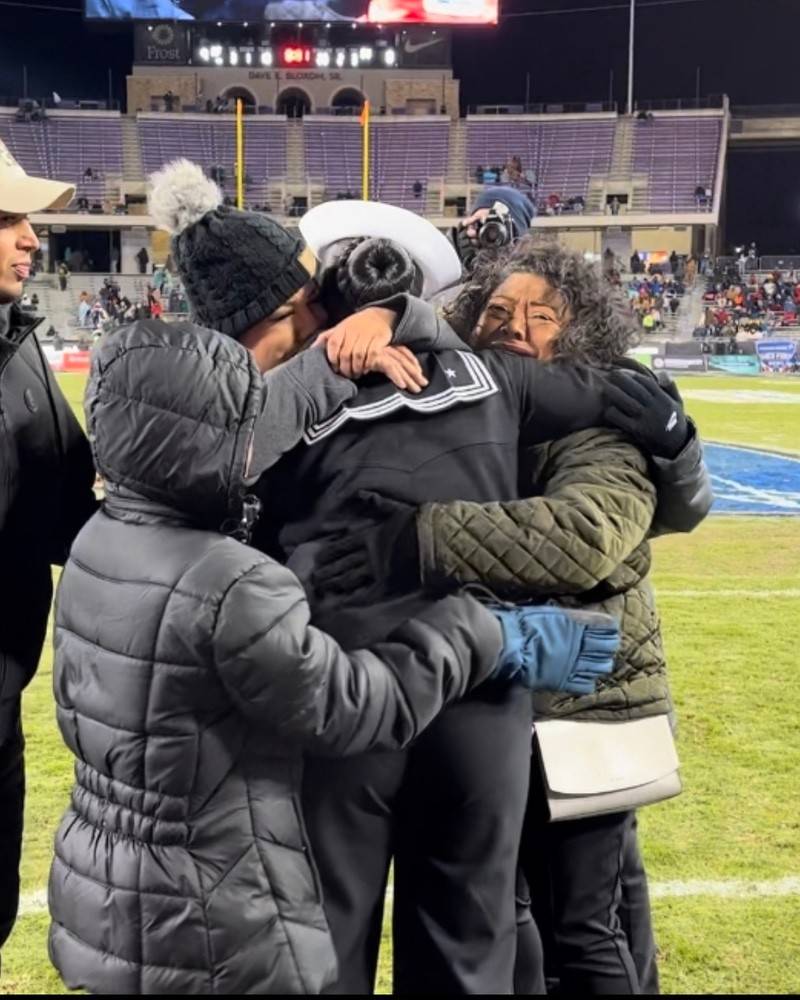