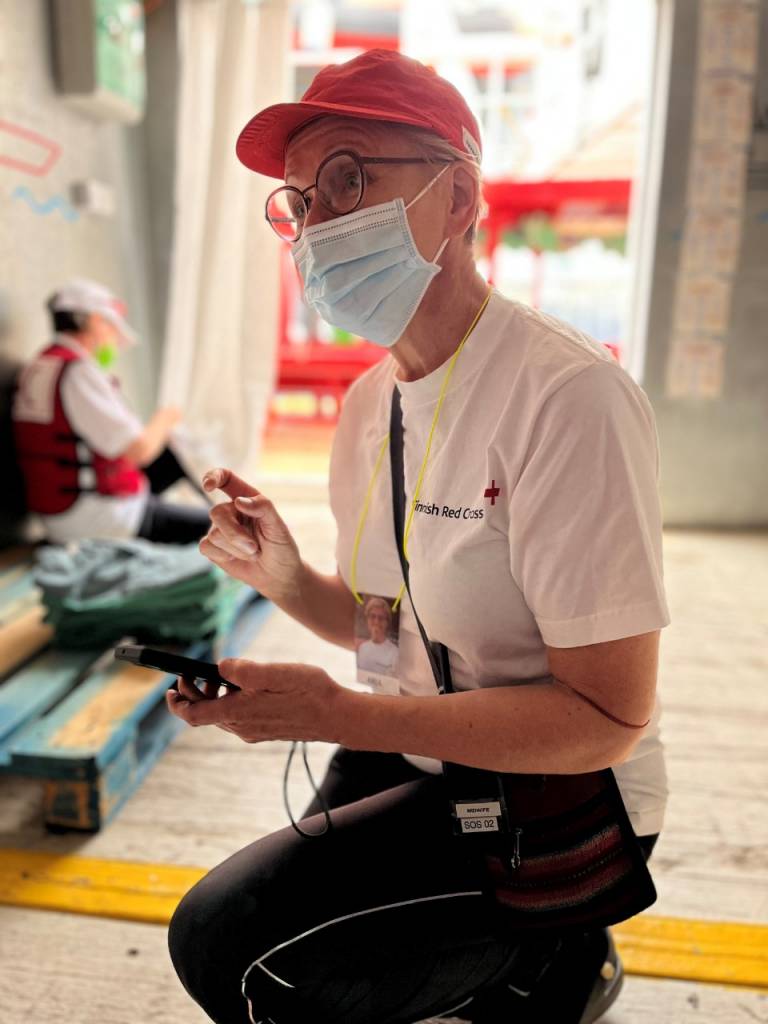 Red Cross nurse and midwife Arja Savolainen was responsible for providing psychosocial and medical support to both the crew and those rescued on board the SOS MEDITERRANEE during a rescue mission in the central Mediterranean Sea. Red Cross photo by Jenelle Eli. 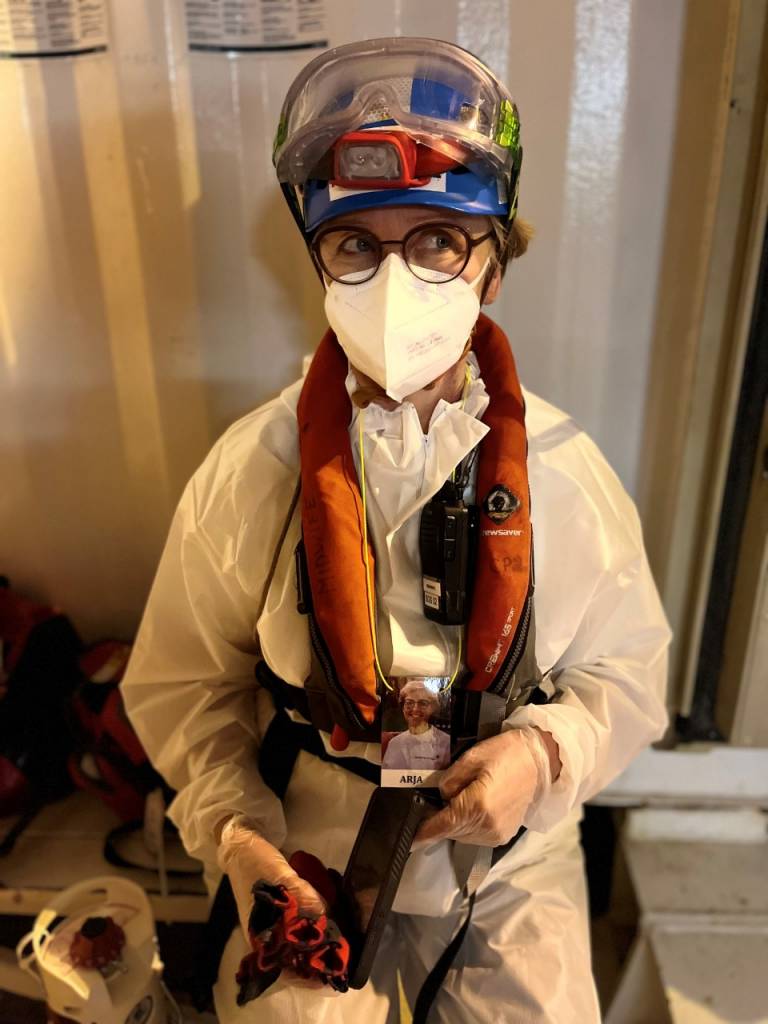 Arja took care of all kinds of patients rescued at sea. She treated the flu, headaches, skin problems and pain after sitting for long periods in the rubber boats. There was also a lot of extra monitoring work because of covid-19. Red Cross photo by Jenelle Eli.

In late 2021, American Red Cross staff member Jenelle Eli deployed on behalf of the International Federation of Red Cross and Red Crescent Societies (IFRC) to work alongside SOS MEDITERRANEE and help rescue people in distress from the waters of the central Mediterranean Sea. Joining Eli was Arja Savolainen, a midwife and Red Cross nurse from Finland who was responsible for providing psychosocial and medical support to both the crew and those rescued.

For many years now, lives have been needlessly lost on the long and treacherous Central Mediterranean route between Libya and Europe — the most dangerous migration route in the world. Last year more than 1,200 people are known to have died trying to flee desperation via small wooden boats or inflatable rafts. While these are the officially recorded numbers, it is believed that many more have perished at sea. During Eli’s deployment, the crew was able to rescue 314 people, some of whom were women and children. This is an ongoing effort in the Mediterranean.

NURSE TELLS HER STORY Red Cross nurse midwife Arja Savolainen was responsible for providing psychosocial and medical support to both the crew and those rescued. She said the mission touched her very deeply. Savolainen reported, “I have been on many missions — in refugee camps, disaster and earthquake areas, but it has never been this clear. To see the boat full of small children and mothers in very dangerous circumstances, in the middle of the night, in the dark. It’s so concrete.”

“I think how those we were able to save had to leave their homeland and family, all the important things. It hasn’t been an easy choice and maybe not even a choice at all,” she said. “I heard many stories of how they didn’t have other choices.”

Here is her story of her time as a Red Cross volunteer during this critical rescue mission:

“We typically patrol international waters outside of Libya because people leave Libyan shores in rubber boats with improper equipment. The SOS Mediterranee team searches for people in distress at sea and brings them to our bigger ship, where the Red Cross provides health care.

“I am a nurse and a midwife. As a nurse, I took care of all kinds of patients rescued at sea. I treated the flu, headaches, skin problems and pain after sitting for long periods in the rubber boats. They experienced very bad conditions in Libya. They needed emotional support after a very long, tiring and emotionally demanding trip. This was especially true for the women and children who traveled alone. Some of the women faced terrible situations.

“We monitored pregnant women, did post-labor monitoring, and gave health care to small children. There were also a few young babies on board. They were very tired and, understandably, very shocked. Some were crying. Some were in good condition if they had spent just a short time on the sea, but some of them spent days on the boats.

“Their clothes were wet and they may not have had a chance to use a toilet. Some hadn’t eaten. The children sensed their parent’s alarm and confusion. We had a lot of children who were around a year old and 5-12-year-old schoolchildren who were interested in what was going on, a lot of which we tried to prevent them from seeing. There was also a lot of extra monitoring work because of covid-19.

“I met a Nigerian woman who had a child a little over a year old. It was just the two of them. She told me that her husband and two older children had stayed home. I wanted to ask how she had the courage to leave and take the baby with her but she didn’t talk about it so I didn’t ask. This mother was very aware, and she took very good care of the baby. Hopefully they have a future. I hope that the whole family meets one day together.”

SHE WANTED TO HELP When an influx of people fleeing war and persecution started entering Europe years ago, , Savolainen started to think that something should be done for them. “I wanted to help because over the years the situation has become even more challenging,” she said. “Even more people are taking these dangerous routes to reach Europe.” She reported many on the small boats have never been on the sea and don’t know if it’s safe or how dangerous the situation is.

“I couldn’t think of working with any other organization,” says Savolainen “Other organizations do valuable and impressive work to ease human suffering, but I want to work via the Red Cross. The principles are so impressive. If you act according to them in everyday life and aid operations, you do the right thing. I really appreciate the Red Cross.”