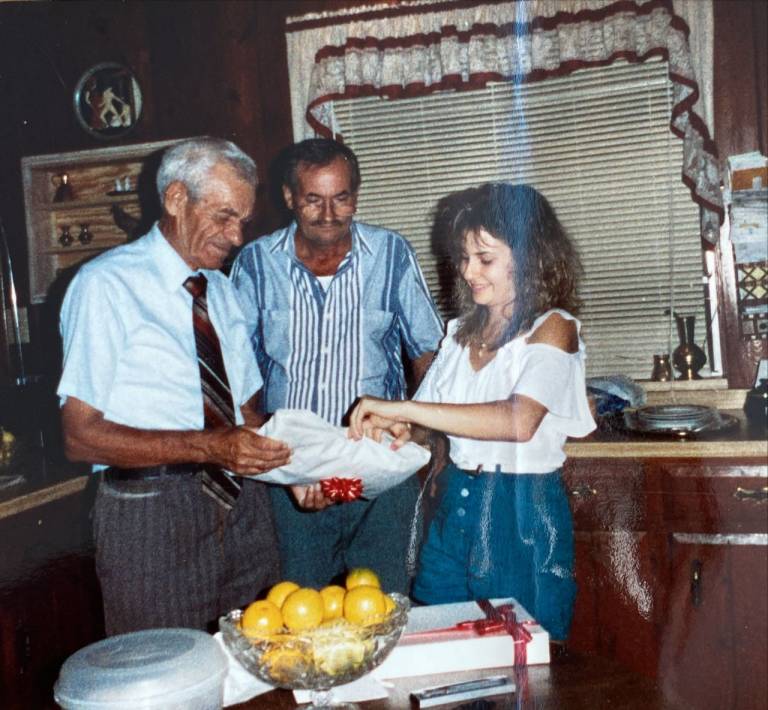 Effie Santos and her father, Oresti Bodzakos, pose for a photo in their kitchen. Through the Red Cross Restoring Family Links Program, Bodzakos and his family were reunited after more than 30 years apart. 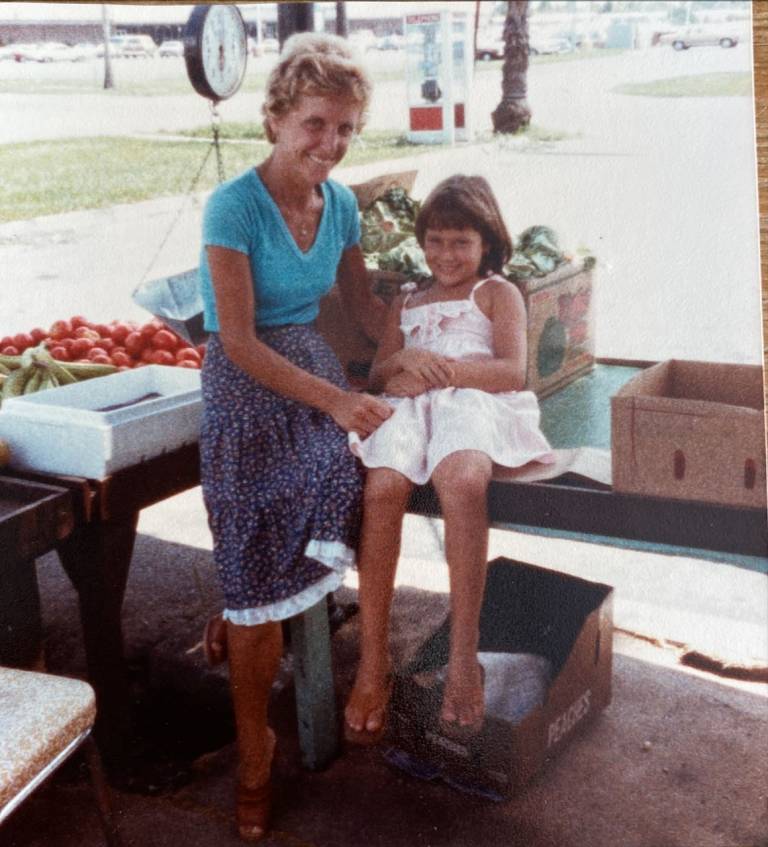 Growing up in Tampa, Florida, Effie Santos loved the stories her mother, Vasiliki “Bessie” Bodzakos, would tell. Born in Greece when the country was on the cusp of civil war, her mother was sent to an orphanage in neighboring Romania as fighting neared her home. Throughout these trials, Santos says that her mother received constant support from the Red Cross.

Effie Santos grew up hearing stories of how the Red Cross touched her mother’s life. Many years later, as an adult, the organization once again came into her life. The Red Cross Restoring Family Links Program united her father’s family, bridging a divide of two continents and making her family whole again after decades of separation.

Growing up in Tampa, Florida, Santos loved the stories her mother, “Bessie” Bodzakos, would tell. Born in Greece when the country was on the cusp of civil war, Bodzakos was sent to an orphanage in neighboring Romania as fighting neared her home. Throughout these trials, Santos says her mother received constant support from the Red Cross.

“My mother always says, ‘I had everything I needed — food, blankets, all of my vaccines — everything! All because of the Red Cross,” Santos shared.

At 16, her mother returned to her family in Greece and there she met her husband, Oresti Bodzakos. Together, they moved and settled in Florida. While that could have been the end of the family’s story with the Red Cross, it proved to only be the beginning.

As the years passed and the family settled into their new life in Florida, Santos’ father maintained an overwhelming sadness about his family left behind in Europe. “It turns out, my father simply did not know where his family was or if they were even still alive,” Santos said.

The trouble began when Oresti Bodzakos, an Albanian, was 18 years old. One day, he and a friend accidentally crossed the border into neighboring Greece. At the time, Albania was a communist country and reentry was strictly forbidden. From that moment on, Bodzakos was cut off from his family in Albania with no way to contact his parents or his eight siblings.

According to Santos, her father struggled with many questions he had no way of answering — Was his family alive? Were they healthy? Did they know what happened to him? And did they miss him as much as he missed them?

Despite all of the unanswered questions, the family’s life continued in America. Until one day in 1992, a letter arrived from the Red Cross. Santos remembers watching her father read the letter at the kitchen table and tears began to stream down his face.

The letter, which was from the Red Cross Restoring Family Links Program (RFL), contained correspondence from her father’s siblings in Albania who had been searching for him.

“The floodgates opened for my dad when he got that letter,” Santos said. “He just sat over the kitchen table crying. My mom and I were so excited for him.”

Each year, through the Restoring Family Links program, the Red Cross connects families separated by international disaster, conflict and migration. Red Cross teams are working around the globe and last year, connected more than 7,000 families. According to Santos, these services have long-lasting and incredible impacts on families like hers.

Shortly after the letter arrived, her father flew to Albania where he and his siblings reunited after nearly three decades apart.

“They treated him like a king,” Santos laughs. “After so many years away, it was so special for him to be home again.”

Her dad returned to Florida six weeks later and brought his oldest brother with him. After that visit, he began the process of sponsoring his siblings to immigrate to America. “My dad was on cloud nine,” said Santos.

“He had this lifeline to his family he hadn’t had before — they weren’t lost, they’d found each other. My dad was not very open with his emotions, but we could see what a tremendous difference this had made for him,” he said.

Sadly, her father was diagnosed with lung cancer not long after. Santos was just 19 years old when he passed away. Only a year and a half earlier, the letter from the Red Cross arrived.

Santos says her mom knew how important it was to continue to support her husband’s Albanian family in their attempts to immigrate. She served as a sponsor for his nephew and even let the family briefly live with her until they were settled and ready to buy a house.

“I feel so blessed to have my family here and close by and to see everyone grow up together and be a part of each other’s lives,” Santos said.

“I get to hear stories of my dad from his childhood, and I get to tell them about what he was like when I knew him. I feel this connection to my dad and his family that is so special. It fills my heart up.”

Today, Santos knows that her dad’s life was forever changed by one letter from the Red Cross.

“I always knew that the work of the Red Cross was life-changing but knowing that you’re out there connecting families – families like mine – it’s just so personal and incredible,” she said.

Santos says that the timing of everything was beyond serendipitous and that it was so important for her father to connect with his family before he passed away. “If it wasn’t for the Red Cross, he never would’ve found them again.”