A new chapter for students in Haiti as school reopens

A new chapter for students in Haiti as school reopens 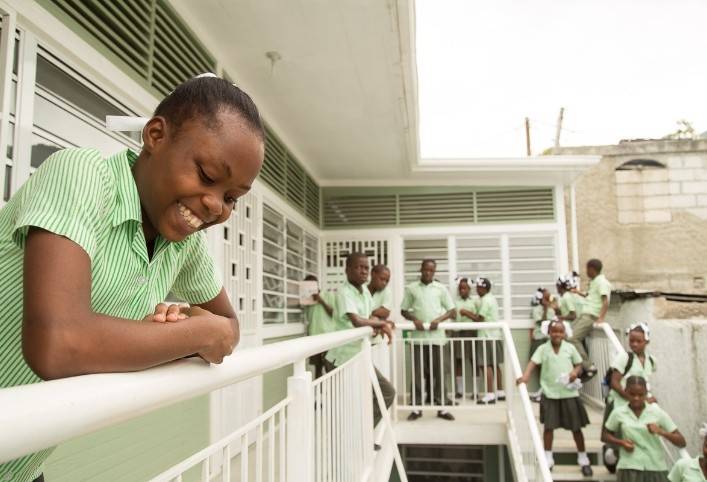 “We are happy and proud of our new school,” exclaimed Samantha Georges, a 6th grader standing on her school’s newly renovated walkway. Before the renovation, Ecole CEMEAH hosted students up to grade six. 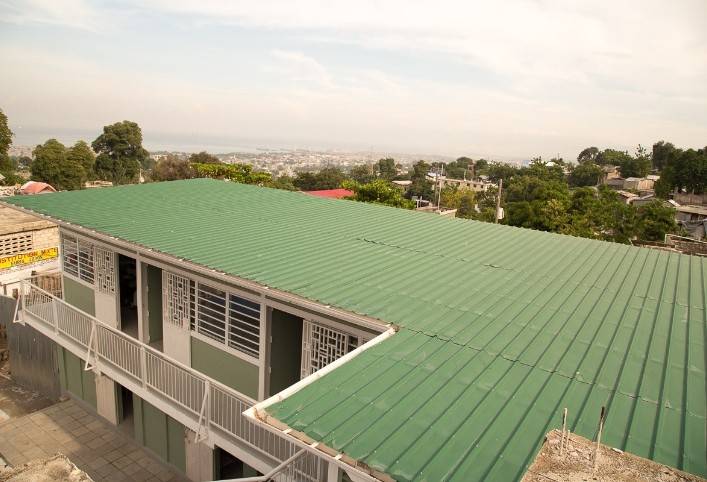 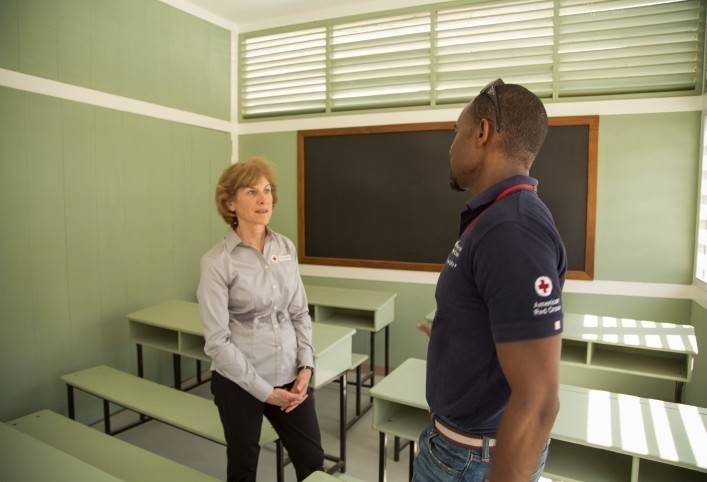 American Red Cross President and CEO, Gail McGovern, and American Red Cross staff member, Camoens Rene, visited Ecole CEMEAH in August 2015. “Every time I come back to Haiti, I see it improve a little. But this time, it is a huge leap,” says Gail.

When a 7.0 magnitude earthquake struck Haiti on January 12, 2010, many students found themselves without classrooms. In fact, nearly half of the nation’s 15,000 primary schools and 1,500 secondary schools were impacted. One such learning facility, named Ecole CEMEAH, recently reopened its doors with the help of the American Red Cross.

Although students attended the school over the past six years, even the slightest wind or rain meant that the school had to close its doors or modify its activities. Wanting a safer and more dependable school for their children, residents of Campeche—a neighborhood 20 minutes’ drive from downtown Port-au-Prince that was severely impacted by the quake—asked the American Red Cross to rebuild Ecole CEMEAH, whose central location serves as a hub of activity in the neighborhood.

The building—two stories tall and painted light green—features reconstructed classrooms, brand new floors, and fully-ventilated rooms for a more comfortable learning environment. Teachers can choose to expand rooms or narrow them thanks to sliding, interior walls. A new administrative office has been built and separate girls’ and boys’ bathrooms installed, complete with running water—something not taken for granted in the crowded city of Port-au-Prince. Outfitted with new desks, teaching supplies and chalkboards, the school is part of a sustainable approach to improve access to education for children impacted by the quake.

Before the renovation, Ecole CEMEAH hosted students up to grade six. The reconstruction ensures that students can now study there through grade nine.

“We are happy and proud of our new school” exclaims Samantha Georges, a 6th grader at Ecole CEMEAH. She can hardly find the words to describe all the differences the renovation has made. “Before, there were cracks all over and the walls frightened us. In addition, we were piled on each other. But now, with this beautiful building, with large classrooms, we really learn better,” she explains.

Ecole CEMEAH is the first school in Campeche to meet the standards of Haiti’s Ministry of National Education and Vocational Training. Renovated to better withstand future earthquakes—and other weather events like hurricanes—the school is the first of ten educational facilities to be reconstructed or expanded by the American Red Cross in Campeche and neighborhoods nearby. The school renovation is a small part of the Red Cross’s LAMIKA Program—an initiative that’s helping residents of Campeche and its seven surrounding neighborhoods recover from the earthquake in a way that makes them safer, healthier, and more resilient to future disasters.

Ecole CEMEAH can serve the community far into the future—even beyond educational needs. The building was renovated in a way that makes it an emergency shelter in case of natural disasters like flooding or hurricanes. And an adjacent health clinic is also being renovated and equipped by the American Red Cross. This focus on long-term sustainability can be found in all of American Red Cross investments throughout the neighborhood of Campeche and beyond: from funding entrepreneurs to reconstructing and restoring heavily impacted neighborhood infrastructure such as homes, water systems, clinics, retaining walls, lighting and walkways.

In the aftermath of the Haiti earthquake, American children took up donations and gave them to the Red Cross. Thanks in part to those generous gifts, Haitian children in Campeche have the opportunity to study in safe, comfortable, and dependable learning environments.