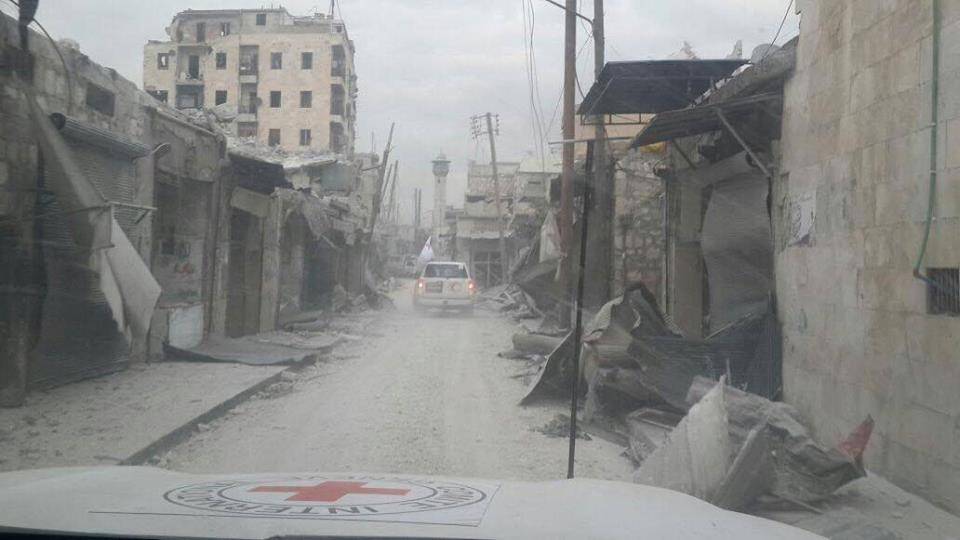 Teams from the International Committee of the Red Cross (ICRC) and Syrian Red Crescent are evacuating people from eastern Aleppo, where buses and ambulances have crossed battle lines to help civilians leave the besieged part of the Syrian city.

With the agreement of all parties, the global Red Cross Red Crescent network has already managed to evacuate more than 10,000 people—many of whom are in a critical condition.

As tension between parties escalated on Friday, evacuations were put on hold. Thousands of people—including women, children, the sick and injured—remained trapped in eastern Aleppo waiting for the evacuation operation to continue. They waited throughout in freezing temperatures, close to the front line and in constant fear and anxiety.

Evacuations resumed earlier this morning. The Syrian Red Crescent tweeted that 75 buses have transported around 5,000 people from eastern #Aleppo, while 500 people from Foua and Kefraya have been evacuated.

ICRC has been negotiating with all sides in the conflict to prevent further human suffering in the besieged city. "We have to do something because tomorrow might just be too late,” pled the ICRC’s Pawel Krzysiek in this video from Aleppo.

"We're ready to resume facilitating the evacuation according to our humanitarian mandate. But we now expect all the parties on the ground to provide us with solid guarantees in order to keep the operation going. They're the ones who have to protect the people and provide safe passage. We cannot abandon these people," remarked ICRC’s Marianne Gasser.

Residents have faced weeks of bombings, food and fuel shortages and lack of facilities to treat the sick and injured with medical facilities in Aleppo largely reduced to rubble. The health situation there is absolutely catastrophic, with only a few structures partially operating and very limited staff, medicines, fuel, and equipment.

“We have seen in the past weeks when we heard the stories of the people who fled eastern Aleppo how much risks those people take; how many impossible choices they have to make in order to reach safety,” stated Krzysiek.

ICRC and the Syrian Red Crescent continue to provide hot meals to thousands of people displaced in the collective shelters in Jibreen, and are working to improve shelter conditions, ensuring privacy to families seeking refuge there, as well as setting up latrines and showers, and delivering clean water. The ICRC is also helping families to restore contact with loved ones, and is supporting the Red Crescent’s mobile medical units, rehabilitation of clinics, and delivery of medicine. For the sake of civilians—and in line with its seven fundamental principles—the global Red Cross Red Crescent network remains committed to act as a neutral and impartial humanitarian intermediary.

If you or someone you know has lost contact with a loved one in Syria due to the conflict, the Red Cross may be able to help you reconnect. Please call 844-782-9441 for more information.

As their lifesaving work continues, the American Red Cross has committed $100,000 to the ICRC. Over the past five years, the American Red Cross has spent and committed more than $2.5 million on relief efforts in Syria and its neighboring countries affected by conflict—such as Iraq, Turkey, Lebanon, and Jordan. This, in addition to more than $700,000 to help Red Cross teams cope with the Europe migration crisis.

Syria is one of the most dangerous conflicts for humanitarian workers in the world. Over the past six years, more than 50 Syrian Red Crescent staff and volunteers have lost their lives while carrying out their duties.

Yasser Laqmoush, a Syrian Red Crescent volunteer, is one of the latest victims. Yasser was killed while on duty in Idlib on December 15, 2016 – during an incident in which several others were also injured. He was a dedicated first aid volunteer who had worked for the Syrian Red Crescent for more than three years. He wrote this piece about his experience working for humanitarian values before he died.

Earlier this month, the global Red Cross Red Crescent network conducted a joint operation to evacuate nearly 150 civilians from Aleppo. "These patients and civilians had been trapped in the area for days because of heavy clashes nearby and as the front line kept drawing closer," ICRC’s Glasser said. "Many of them could not move and needed special attention and care. It must have been terrifying for them." 118 patients were taken to Aleppo's Al-Razi, University or Ibn Khaldoun hospitals, while 30 men, women and children, were transferred to shelters in Western Aleppo. Six orphaned and very young children were among the evacuees. Tragically, for some, the operation came too late: 11 people died before the Red Cross and Red Crescent teams were able to reach them. They were either caught in the crossfire or died because they did not have access to the right medications. The Red Crescent also evacuated their human remains, so they can be properly identified and returned to their families, and accorded the appropriate funeral rites.

This year, ICRC has carried out 55 cross frontline operations in Syria, bringing food and essential aid to 8 million of people—and clean water to millions more. Thanks to joint efforts with the Syrian Red Crescent, teams are able to help people in areas that no other humanitarian organization can reach. But the scale of the crisis is greater than anything the teams have faced in the last 15 years.

For live updates from Syria, follow @ICRC-sy and @ICRC