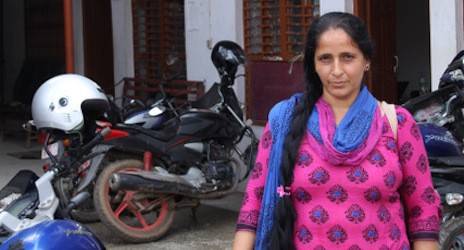 Twenty five people sit around a long, rectangular table in the Nuwakot District Office of the Nepal Red Cross Society. They scribble into their notebooks as fiercely as the fans whir above. Deependra Shrestha, the Red Cross Branch health focal point for Nuwakot, stands in front of them, preparing them for the upcoming measles and rubella campaign they will be taking out into their communities.

In total, 435 volunteers from the 14 most earthquake-affected districts are participating in a nationwide campaign aimed at vaccinating nearly 600,000 children up to 5 years old against measles and rubella. As Shrestha explains, following humanitarian emergencies such as the 25 April earthquake, preventative public health interventions are as critical as relief distributions. In many cases, they can help prevent secondary disasters such as disease outbreaks.

Devaki Poudel is one such volunteer. At 35 years old, she has been a single mother since her husband died 13 years ago. Her house was severely damaged in the quake and she received blankets and shelter materials from the Red Cross. She’s seen more loss in her life than many.

“I wanted to be educated,” she said. “I have a voice; I wanted to be a singer. But I got married at 15 and had to leave school after Grade 8.”

When her children were very small, they both got measles, making a tough situation even harder.

“They were both so sickly, and I remember they both wanted to sleep with me, so I had to sleep in the middle of the bed. I got up at midnight one time, because I was scared and wanted to turn on the light,” she said. “I felt particularly down, and was wondering why I was even alive. Then I turned around and the light was shining on my children’s faces. I realized I needed to be alive for them. I want them to be educated. It is because of them I have been able to be strong, even after the earthquake.”

Devaki’s children recovered fully from the illness. But before widespread vaccination campaigns, measles caused millions of complications and deaths worldwide. Rubella during pregnancy can cause miscarriage or other problems.

Having seen firsthand the pain measles can cause, she volunteered to help as soon she found out about the campaign, joining the hundreds of others that will be distributing information, organizing school rallies and communicating about the campaign. The campaign brings together several partners, including the Ministry of Health, World Health Organization and the Nepal Red Cross Society, and will run for nearly a month.

For more information on how the Red Cross has helped vaccinate more than 1.8 billion children against measles since 2001 as part of the Measles and Rubella Initiative, click here.