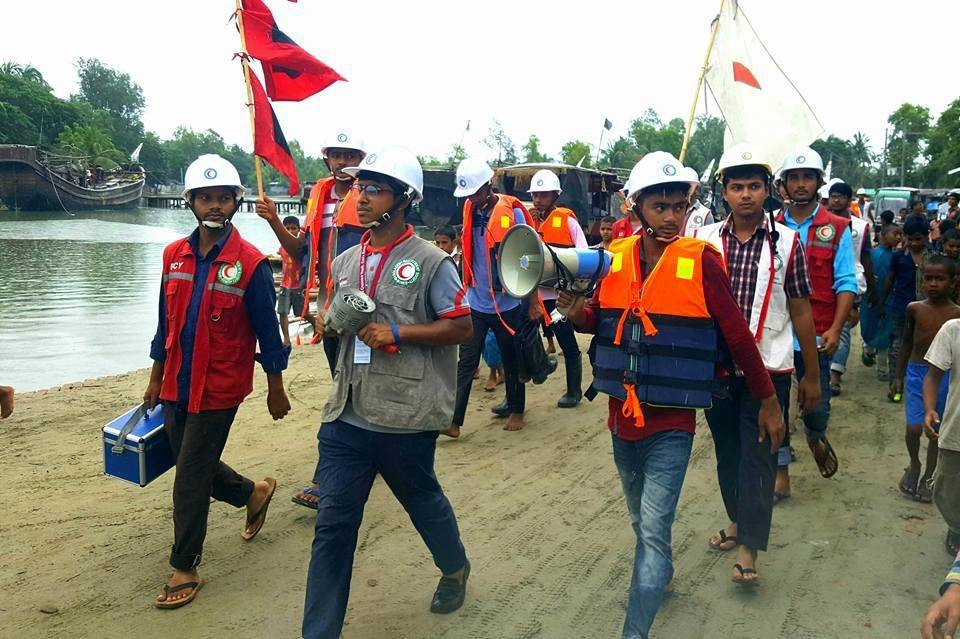 Volunteer teams from the Bangladesh Red Crescent were out in full-force this weekend as Cyclone Mora barreled towards the South Asian country. Volunteers helped their neighbors before the storm struck—working with local government authorities to evacuate more than one million people from low-lying coastal areas such as Chittagong, Cox’s Bazar, Noakhali, Laxmipur, Feni, and some of the offshore islands. Red Crescent teams spread early warnings in communities via megaphone and also helped families find safety in storm shelters.

The cyclone made landfall yesterday along Bangladesh’s southwest coastline. The storm was packing winds between 55-72 miles per hour and throughout the day, high winds and heavy rains have battered several districts in the region.

The Bangladesh meteorological office has warned that coastal areas could face flooding as a result of 3-6 meter storm surges along the sea front. The cyclone—which had brought days of heavy rains and flooding to Sri Lanka—intensified as it crossed the Bay of Bengal before hitting the coast of Bangladesh.

“We are already receiving reports that there has been extensive wind damage that left many shelters along the coast in tatters,” said Azmat Ulla, of the International Federation of Red Cross and Red Crescent Societies (IFRC) in Bangladesh.

Of particular concern is the plight of thousands of migrants who recently arrived in the district of Cox’s Bazar from Rakhine State in neighboring Myanmar. Virtually all of this population are dependent on emergency humanitarian aid for their daily subsistence.

“Many of these people lived in makeshift shelters which have most likely not weathered the storm well,” remarked Ulla. “Cyclones hit this coastline every year and we know that one of the biggest needs will be to provide people with emergency shelter materials.”

The day before the cyclone made landfall, the Bangladesh Red Crescent distributed cash grants to more than 2,500 households to help them prepare for or respond to the storm. The grants of 5,000 taka (approximately 67 USD) were distributed through the Red Cross Red Crescent’s ‘Forecast-based-financing’ mechanism. This innovative program is supported by the German Red Cross and German government and is designed to help families better meet their immediate needs when disasters strike. It is activated when specific weather conditions are anticipated and are likely to impact communities living in certain high-risk areas.

Meanwhile, Sri Lanka is in the grip of its worst flooding in 14 years. According to the government, more than 200 people have been killed and 470,000 have been affected. Persistent and heavy rains have triggered widespread flooding and landslides in many areas, particularly in the southwest of the country.

With bad weather set to continue, there are concerns that the situation will worsen. Sri Lanka Red Cross volunteers and staff have been on the frontline of the humanitarian response, providing life-saving first aid, assisting with search, rescue, and evacuation efforts—and distributing food, water and relief supplies to thousands.