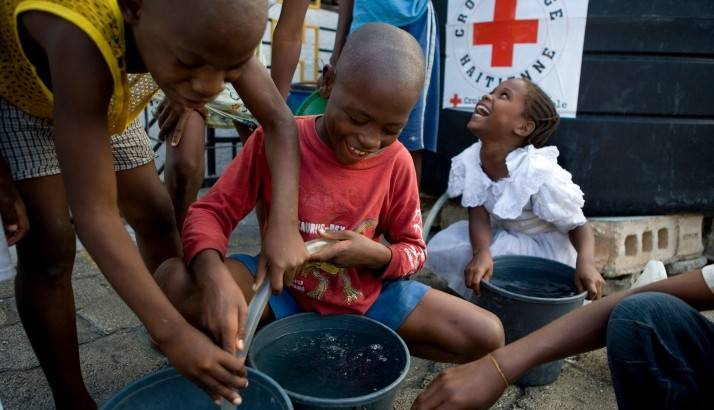 "They were everywhere, even in Nippes, my home department," said President Privert about the Red Cross Red Crescent’s rapid response to Hurricane Matthew—the largest storm to make landfall in Haiti in 50 years.

The recognition follows years of relief and recovery efforts by Red Cross Red Crescent teams. Working in support of the Haitian Red Cross, volunteers saved lives in the earthquake’s aftermath by providing aid such as food, water, medical care, emergency shelter and sanitation.

In the first year alone, the Red Cross Red Crescent provided—among other aid—cash grants and loans to help 220,000 people; medical services for nearly 217,000 patients; safe, drinkable water for 317,000 people every day; and latrines for 265,000 people.

Over the past seven years, the Red Cross Red Crescent has built hospitals, reconstructed schools, funded cholera vaccines, helped people move out of camps and into homes, provided water and sanitation, boosted economic activity, and much more. Read a story about how Haiti’s medical capacity continues to improve at this link >>

"Our work is focused on building resilience with Haitian communities. Together with the Haitian Red Cross and the other partners of the [network], we are working to reduce vulnerability and promote risk reduction. Seven years have passed where great progress has been made, but there is still much to be done, so the [network] believes that this recognition commits it even more to its work in Haiti and efforts to build resilient communities,” said Inés Brill, of the International Federation of Red Cross and Red Crescent Societies. She accepted a plaque from Haiti’s government on behalf of the entire global Red Cross Red Crescent network.

In addition to the global Red Cross Red Crescent network, the United Nations was recognized, as well as Embassies of the Dominican Republic, the United States, Cuba, Venezuela and Colombia. Also honored were the Ministry of Public Health and Population, the Permanent Secretariat of Disaster Risk Management of the Ministry of the Interior and Territorial Collectivities.

This isn’t the first time the Red Cross has been recognized by Haiti’s government. In June 2012, Haiti’s then Prime Minister, Laurent Lamothe, noted that, “The American Red Cross is doing an excellent job helping Haitians in the short and long term.”

The Red Cross Red Crescent network continues its work in Haiti, ensuring that residents are safer, healthier, and better prepared for disasters that may come their way.