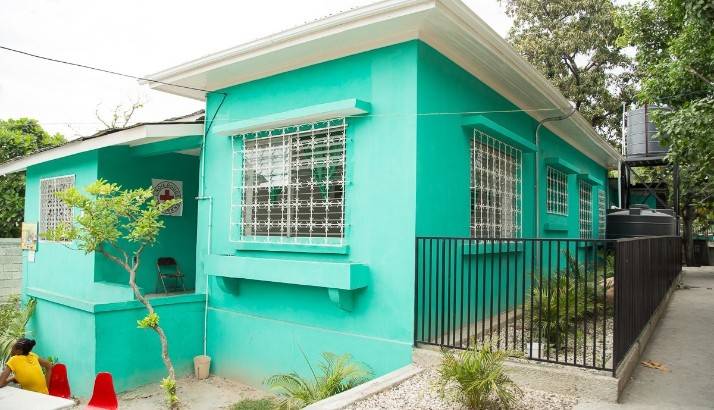 When a 7.0 earthquake struck Haiti in 2010, much of the country’s healthcare capacity and infrastructure was destroyed. But over the course of the past seven years, Haiti has made significant strides in rebuilding and expanding its medical capacity, thanks in part to funding from the American Red Cross.

St. Elizabeth Health Center, located in the south of Port-au-Prince, withstood the earthquake but suffered significant damage. The building's condition and shortage of medical equipment impacted the quality of service at the health center and the number of people it could serve. But a $57,000 contribution from the American Red Cross has brought new life to the facility.

The contribution—which was made with funds donated from the American public—has enabled the center to strengthen and repair its roof, install new suspended ceilings, rebuild the floor, install a new hydraulic system, construct a cold storage room for vaccines using solar energy, add toilets, construct a garden and make additional improvements.

"Before the interventions at the health center, we received between nine and fifteen patients a day, now we can do up to 40 consultations per day," said Eugenie Marcelin, a nurse and the director of St. Elizabeth Health Center. She’s especially energized because the improvements will better allow her to serve the target demographic: pregnant women, mothers and newborns.

"Thanks to the support of the American Red Cross, we can say that the service has become much better. Residents of the communities are better served and show more interest in visiting the center as they see an improvement in the quality of care provided to their children," remarked Eugenie.

In addition to infrastructure work on the building, the Red Cross provided essential equipment including a solar refrigerator for vaccines, chairs and examination tables, a tripod for serums, beds and other materials so the center could deliver high-quality service to patients. And thanks to the renovations, some previously suspended social activities will be reinstated for residents of Carrefour-Feuilles. "The mothers club will restart with its activities and we will revive the youth club," says Eugenie.

St. Elizabeth Health Center is one of more than 50 medical facilities that have received funds from the American Red Cross since the earthquake struck. Funding for each facility ranges from a few thousand dollars for medical equipment to $10 million for large-scale construction work. Read about our $5.5. million contribution to the innovative Mirebalais University Hospital, run by Partners In Health.

Quality service in a better environment

Widline Guillaume, 22, is a local nursing student who recently brought her five-year-old niece to St. Elizabeth’s with a fever. "I believe that the physical appearance of a sanitary space reassures the patient about the quality of the service that is being offered. Being in a clean environment reduces the risk that our children will be exposed to germs while in the health center," she remarks.

Saintil Islande, one of the mothers who frequents St. Elizabeth Health Center, was happy to observe upgrades to the medical facility. "I see that the health center is equipped with a large brand-new refrigerator. The officials informed us that with this refrigerator more vaccines can be stored and preserved, which will benefit our children," answered Saintil, when asked about the most important improvement she observed.

At St. Elizabeth’s, patients have access to general and prenatal consultation, child vaccination, and other family planning services related to the prevention of sexually transmitted infections (particularly HIV and syphilis).

Improvements are part of a large neighborhood recovery project, LAMIKA

St. Elizabeth’s renovation is part of a larger American Red Cross program called LAMIKA—an initiative that’s helping residents of eight neighborhoods in Carrefour-Feuilles to recover from the earthquake in a way that makes them safer, healthier, and more resilient to future disasters.

Through LAMIKA, the American Red Cross and Haitian Red Cross have managed a number of healthcare improvement projects, including complete reconstruction of the CEMEAH Health Center in the Campeche neighborhood, donation of a large capacity solar refrigerator to the Communal Sanitary Office of Port-au-Prince for the storage and preservation of vaccines, and distribution of computer equipment to strengthen the community-based epidemiological surveillance unit at the office.