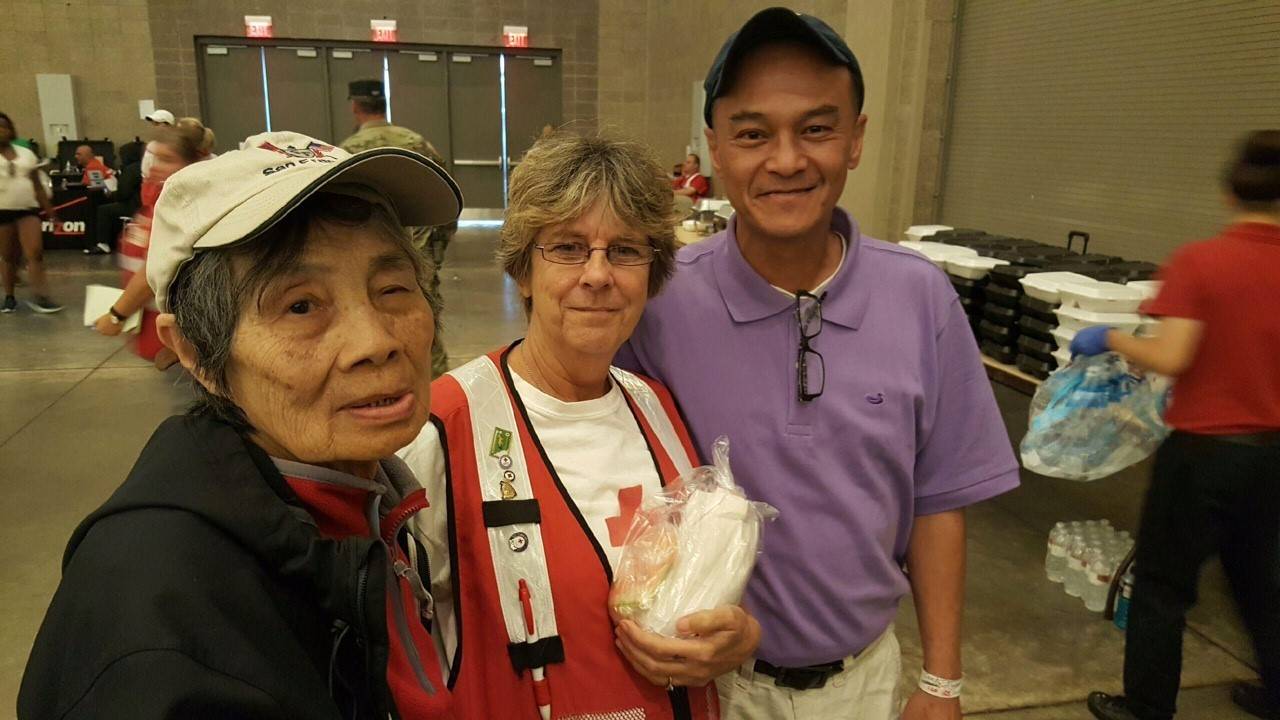 The American Red Cross remains on the ground in Louisiana, helping thousands of people affected by the devastating flooding there.

Two of the people being helped are Nhan Thi Nguyen and her son, Canh, natives of Vietnam who came to the United States in 1974 and have lived in Baton Rouge ever since.

From 1968 to 1972, Nguyen was employed by the U.S. Embassy in Hanoi where she worked in the mailroom. In 1972, the embassy was bombed and she was injured. Moved to a hospital on a U.S. military base for treatment, it took her two years to recover. In 1974, Nguyen and her son were brought to this country by the U.S. State Department and they settled in Baton Rouge.

The mother and son are trying to deal with the devastation they are facing, never dreaming they would have to evacuate after five feet of rising floodwaters covered their neighborhood in eastern Baton Rouge. The family loves animals and had 12 cats and dogs which made their evacuation difficult.

A neighbor helped Nguyen to dry land in an abandoned parking lot where Nguyen, her son and the animals waited three days for someone to help them. Canh Nguyen was suffering from severe blood clots in his legs.

Finally a local pet service provider rescued them, taking the animals and taking the mother and son to a community shelter supported by the Red Cross on the Southern University campus miles from where she lived. In coordination with community partners, the Red Cross quickly began to address her immediate needs – providing a safe and dry place to stay, food and medicine.

Her son needed medical attention and was taken to the emergency room soon after they arrived at the shelter. He was hospitalized for the next three days, leaving his mother, who speaks only a little English, alone. Red Cross volunteer Lori Reilly of Daytona Beach, Fla., took care of the Vietnam native, not leaving her side for three days.

Canh Nguyen is out of the hospital and back to work, gone for 12 hours at a time. Reilly and residents staying at the shelter make sure his mother is okay and keep her company. She has also met Red Cross volunteers from all over the country who have come to Louisiana to help. It’s an experience that has left a lasting impression on the pair, who frequently give their appreciation to shelter staff during their stay.

“The moms and dads of all these volunteers should be proud of what they are doing, leaving their homes to come help us,” Canh said. “People here are resting comfortably. The Red Cross continues to take care of us.”

Amid a Flurry of Global Disasters, Red Cross Helping Around the World
.type=article.p=1.f=service%3Adisaster-relief-and-recovery.t=redcross%3AEmergency-Type%7CFloods
View All
Donate Now