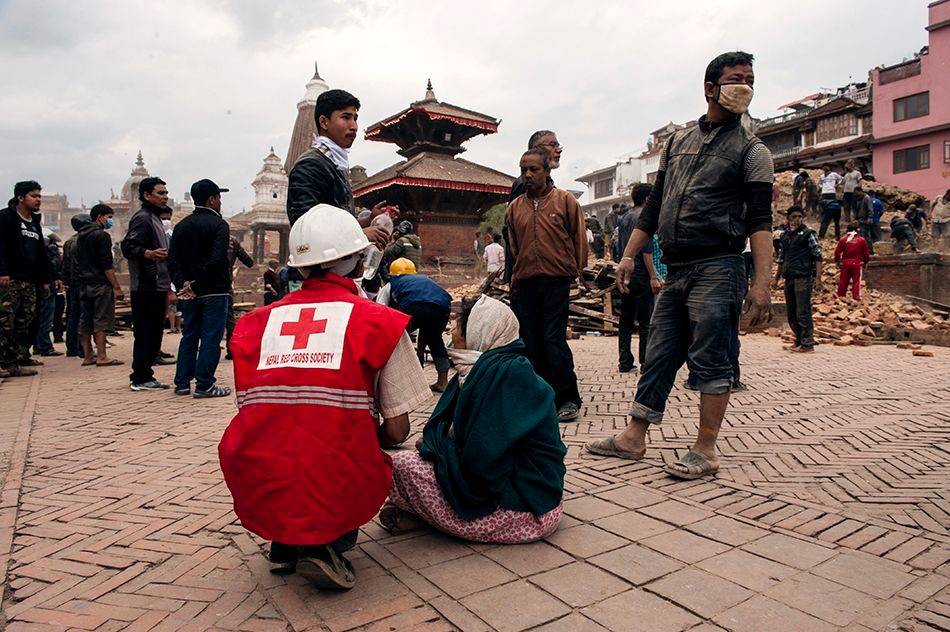 Red Cross volunteers in Nepal are providing first aid to those impacted by the weekend’s devastating earthquake, along with helping with search and rescue and supporting first responders.

One of these volunteers is Sammeer Bajracharya, 22, an engineering graduate. He was part of the team deployed in the early hours after the earthquake to provide first aid and search and rescue support. When the earthquake struck, Bajracharya was in Bhaktapur. “As soon as the earthquake started, I knew what was happening,” he said. “I made sure my family was OK, and then as soon as the shaking stopped I went out to direct people to safer places.”

Once he was sure his family were safe, Bajracharya went to Kathmandu to join a team of first aid volunteers which worked in collaboration with emergency services. “There was a woman trapped in a building, so we provided first aid there before moving on to another area,” he reported.

In addition to providing first aid for those directly affected by the earthquake, the team also treated people in the rescue teams who were dealing with sharp and heavy objects. “There was a rescuer who cut his finger really badly so we gave him treatment. In the same area there was a woman who was trapped in the rubble. One of her legs had been crushed by the falling building. We worked with the rescue teams and did our best to give her first aid, but unfortunately we couldn’t save her.”

After the first day, Bajracharya returned home. “The first night I spent in my community, we formed a team to make sure everyone sleeping outside was safe. We walked around the area where people were staying to make sure it was secure and provided reassurance to those who were scared,” he said. “There were so many aftershocks. I don’t think any of our team slept that night.”

Bajracharya has been a Red Cross volunteer for two years, and initially joined as part of an earthquake preparedness project. In addition to first aid, he has also taken search and rescue training and, in the process, became a passionate advocate of volunteering. “I have become more and more involved and I love helping people,” he says. “I’ll keep volunteering for as long as I can, providing first aid and support to people who cannot go back to their homes.”

The earthquake is the largest to hit Nepal since 1934. Reports vary, but well over 3,000 people have been killed in Nepal, Tibet, Bangladesh and at the Nepal-China border, with some 5,800 more injured. Many are feared trapped under rubble and the number of casualties is expected to rise. Some eight million people have been affected by the quake.

Red Cross Societies around the world, led by the Nepal Red Cross and supported by the American Red Cross, have mounted an international response to provide emergency humanitarian assistance.

HOW TO HELP To help people affected by disasters big and small, like those impacted by the Nepal Earthquake, visit Redcross.org or contact your local American Red Cross chapter.

HELP FINDING LOVES ONES The Nepal Red Cross Society and the International Committee of the Red Cross (ICRC) are working to reunite families separated by the earthquake in Nepal. To learn more, visit the Nepal Earthquake Restoring Family Links page on the ICRC web site.