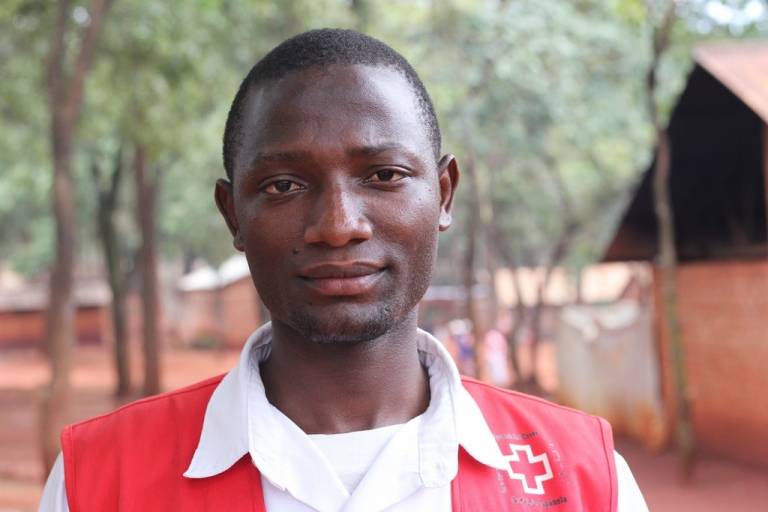 Moses Fugwe, 26, works as a midwife and coordinator for ambulance services at the Tanzania Red Cross main hospital in Nyarugusu refugee camp. 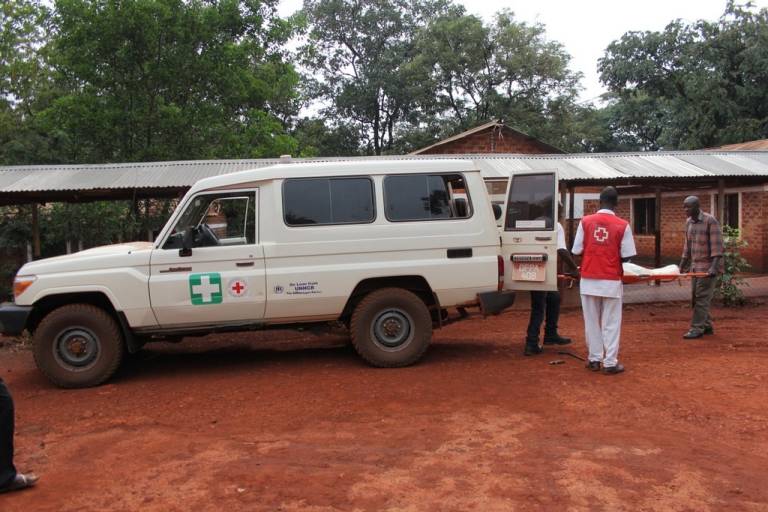 Red Cross hospital staff help with the body of a 9-year-old boy who died from malaria at the Nyarugusu refugee camp. 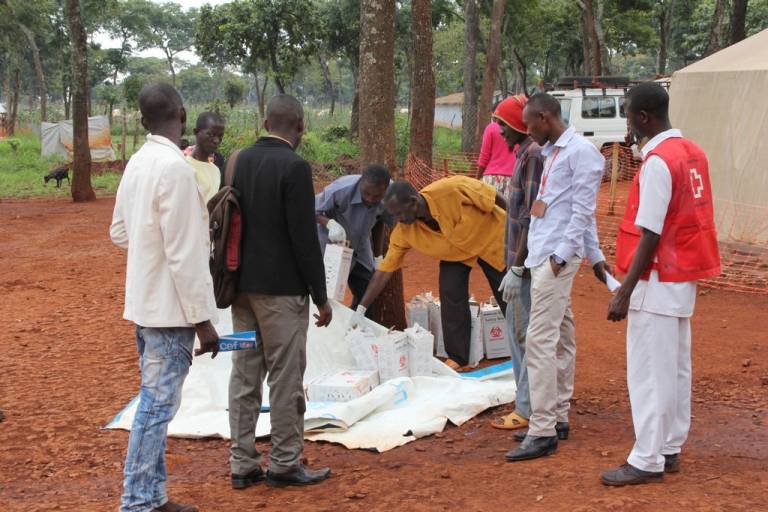 Moses Fugwe, 26, is on his phone more than an average teenager. Small framed and bright eyed, his incessantly-ringing phone is almost an extension of his ear. But he is not playing games or texting friends. Fugwe is saving lives.

Moses Fugwe coordinates ambulance services for the Nyarugusu refugee camp in Tanzania. With only two ambulances - in reality are old Land Rovers stickered with a cross - servicing the entire camp, it is not the small fleet that makes life busy. It is the overwhelming need.

This morning, Fugwe and his team are on their way to Zone 8 from the main Red Cross hospital. A man showed up begging for help for his relative who seems to have gone into catatonic shock. The Tanzania Red Cross Society psychiatrist, two assistants, the relative, and Fugwe pile into the ambulance and head out.

This is the established part of the camp. After 20 years of living here, the Congolese who fled their country have created something more permanent, unlike the tents of the Burundians. The ambulance passes red brick structures housing small stores selling phone credit, offering haircuts. In all this time, however, the roads still leave much to be desired.

“You can see how difficult it is to carry a patient on these roads,” Fugwe leans forward and says, still talking on the phone. It seems he has already gotten another request for service. “When it rains, it is impossible to carry patients without an ambulance.”

Upon arrival, neighbors tell Fugwe that the man has run off. The psychiatrist and two assistants hop out, hoping to find him and offer help. Fugwe swings past the nearby health post to check if any assistance is needed. There are seven such facilities in the camp. As much as he relies on his phone, it is not a reliable network in western Tanzania, so he checks in face-to-face when he can.

With everything under control, he is next off to Health Post 5, operated by the Tanzania Red Cross Society. A call has come in for a seizure patient who needs to be transported to the main hospital. By the time the ambulance arrives, the patient had stabilized and can stay for the moment. On average, 250 to 350 people visit this health post every day, often waiting hours before being able to see someone.

When Fugwe started in May 2015, the pre-electoral violence in Burundi had sent a massive influx of refugees fleeing into Tanzania. The number of patients was close to 400 a day, sometimes with only two clinicians to see patients.

“Anyone who comes in will see a doctor,” Fugwe says. “We make sure all patients see the doctor even if they have to wait.” And they do wait. Waiting is something people here seem accustomed to doing.

A call comes in from Health Post 4 down the road, also run by the Red Cross. There are two hospitals serving 150,000 refugees although only one can treat emergencies. Malaria is a huge problem here; some 60 per cent of patients have it. Just this morning, a nine-year-old boy died from a suspected case. His father brought his son’s body into the health post and is waiting for transport to the main hospital.

Fugwe receives another call, a patient at the same health post who also needs an ambulance. When it comes to the living and the dead, you have to place priority on the living. Fugwe is always having to make such tough decisions. If a patient needs emergency care which the main hospital cannot provide, they must be transferred to Kigoma, some three hours away. When only one ambulance remains, it is a matter of constantly choosing the priority case. Again, people must wait.

The patron of the hospital greets Fugwe when he arrives, taking his hand and walking him to the father who stands glassy eyed and vacant, the small wrapped body of his son in his arms. The patron and doctor both suspect he had malaria, as he fell victim to it at least once every year. Fugwe says it is hard to tell. “You can’t a collect a good history to know for sure.”

The boy was treated at Health Post 4 two weeks ago. But the day before yesterday, he became ill once again, complaining about abdominal pains, headaches and a distended stomach. By the time his father headed into the facility, the child had passed. Even if he had been brought in for treatment sooner, there is no guarantee the proper medicine would have been available. Originally built with a capacity of 50,000, Nyarugusu camp now holds triple that amount. Supply simply cannot keep up with demand.

Passengers in the ambulance are silent as it brings the father and his son’s body back to the main hospital where it will be examined at the mortuary and prepared for his family to bury. It is in stark contrast to the scene outside. The camp is buzzing. It is a food distribution day so people fill the streets in front of the hospital on their way for their biweekly rations. The boy is removed from the car on a stretcher; his father carries one end. Fugwe quickly checks in with the patron. His phone rings. “We are being called back to where we just came from.”

A majority of the emergencies include severe malaria and complicated pregnancies. But with such limited resources, the ambulance is also used to transport food and medicine, sometimes sharing space with needy patients. Currently there are biohazard safety boxes waiting for transport back to the main hospital. They need to be burned. As he arrives back at Health Post 4, Fugwe’s phone rings once again.

“At least today is not busy,” he leans over and whispers. “Some days this car never rests.”

There is not an ounce of sarcasm in his voice.

The American Red Cross has contributed $200,000 and a disaster response specialist to help support the IFRC’s ongoing work around population movement in Tanzania.

The International Federation of Red Cross and Red Crescent Societies (IFRC) has launched an Emergency Appeal of 5,245,197 Swiss francs to support the Tanzania Red Cross Society as it responds to this unfolding crisis. The Appeal aims to assist 250,000 refugees in the Nyarugusu and Mtendeli camps through the provision of basic health care, water, sanitation and hygiene promotion, shelter, disaster preparedness and risk reduction and capacity building. The Appeal is currently 48 per cent funded. Funding for the Tanzania Red Cross Society’s Health Posts #4 and #5 comes from a generous contribution by the European Commission's Humanitarian Aid and Civil Protection (ECHO).