Puerto Rico: How the Red Cross is Helping

Puerto Rico: How the Red Cross is Helping 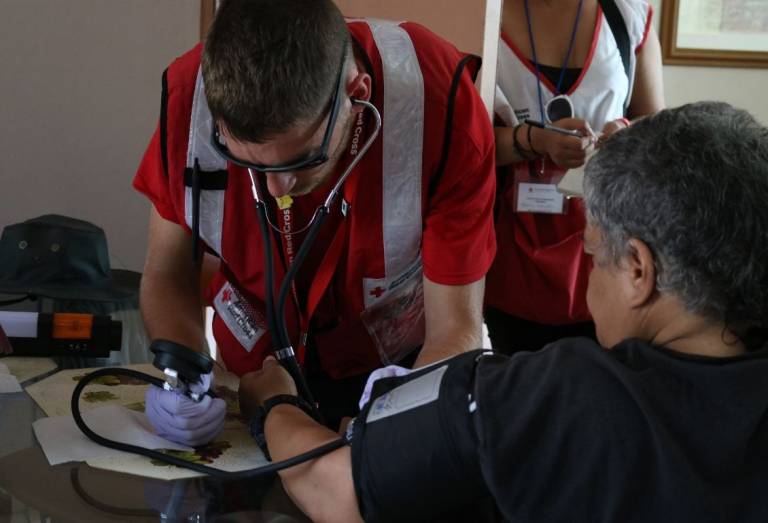 Jason Boutot, a Connecticut-based Emergency Medical Technician who is volunteering with the Red Cross in Puerto Rico, takes a resident’s blood pressure in Trujillo Alto, in the northeast area of Puerto Rico. 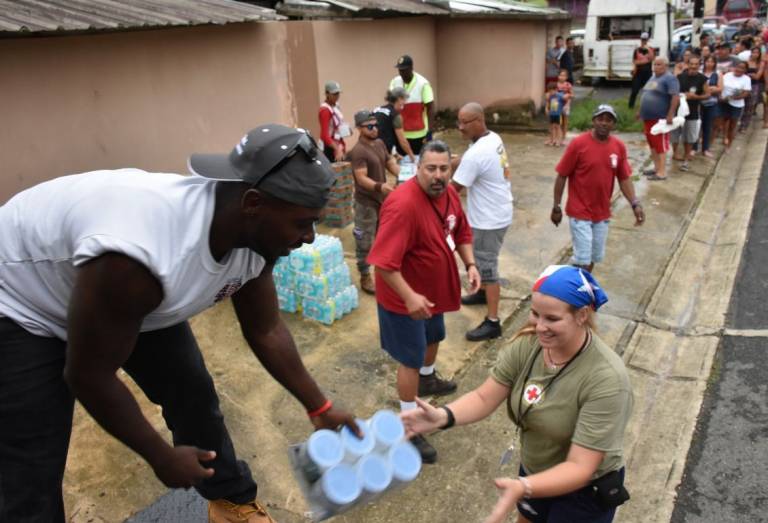 The American Red Cross is in Puerto Rico, working alongside government officials and disaster partners to help the hundreds of thousands of people who are suffering since Hurricane Maria devastated the area. Red Cross volunteer Winnie Romeril describes what conditions are like in these reports:

“Nearly all of the people we are called to visit have complications with diabetes,” explains Jason Boutot, a Connecticut-based Emergency Medical Technician who joined the Red Cross in September and is now in Puerto Rico after Hurricane Maria.

“The health situation in Puerto Rico is the worst I’ve seen. One patient in San Lorenzo had a blood glucose reading of 596 mg/dl (it should be between 80-120 mg/dl). She was way, way up in the mountains and her unrefrigerated insulin was cloudy because she doesn’t have power. She could have died if she injected that,” Boutot explained. “We couldn’t leave her like that.” The Red Cross team called an ambulance and waited over an hour for it to arrive.

Emergency medical services are overwhelmed in the rural areas hardest hit by Hurricane Maria. Road access is often hampered by fallen trees, recurring mudslides and missing bridges. While urban areas are enjoying a return of some normalcy, the central mountainous region of the island continues to suffer from a lack of services. The people living there are experiencing increased health problems due to the extended period of isolation.

Red Cross nurses and EMTs like Boutot have encountered bedridden patients with deep, festering ulcers who cannot travel in cars. “One woman I saw in this condition is in danger of becoming septic and that could be fatal,” he explained. The Red Cross team also cared for this woman’s caregiver, who had a fist-sized spider bite on her calf.”

Daniel Delgado, chief of Individual Disaster Care, who oversees the Red Cross health teams in Puerto Rico, reports, “Without a doubt, the most vulnerable people of Puerto Rico – the elderly, bedridden and people with other health challenges – who are still without power and clean water a month after Hurricane Maria, need our care and support now more than ever.”

Red Cross relief workers drove for hours up and down mostly one lane roads to get to San Lorenzo, Morovis, a town of around 1,700 people, nestled deep in the center of the island. Toppled electrical poles and broken bamboo forests, recently cleared mudslides and swollen, muddy waterfalls threatened this route around every dizzying, hairpin turn. The team was there to hand out relief supplies such as water, tarps, flashlights, baby formula, hand sanitizer and other items.

It’s dusk when the team finishes helping the last families in line. Many hours of difficult driving on unlit winding mountain roads to get to a main artery leading to San Juan await the Red Cross team. As darkness falls in the mountain valley and the Red Cross departs for San Juan, only the truck’s headlights— and the flashlights the team just handed out— light the night.

These volunteers are working 15-hour days, six days a week, delivering supplies to town after town. Several cars of Red Cross volunteers together with Teamsters and Fire Department of New York volunteers complete each of the 15-20 convoys that spread out across the island each day. The Red Cross has reached every one of Puerto Rico’s 78 municipalities, but due to the limited supplies available until now on the island, more trucks and supplies are needed to adequately care for every affected community.

The Red Cross is on the ground responding to this devastating storm and needs financial donations to be able to provide immediate disaster relief for those affected. Help people affected by Hurricane Maria by visiting redcross.org, calling 1-800-RED CROSS or texting the word MARIA to 90999 to make a $10 donation. Donations enable the Red Cross to prepare for, respond to and help people recover from this disaster.