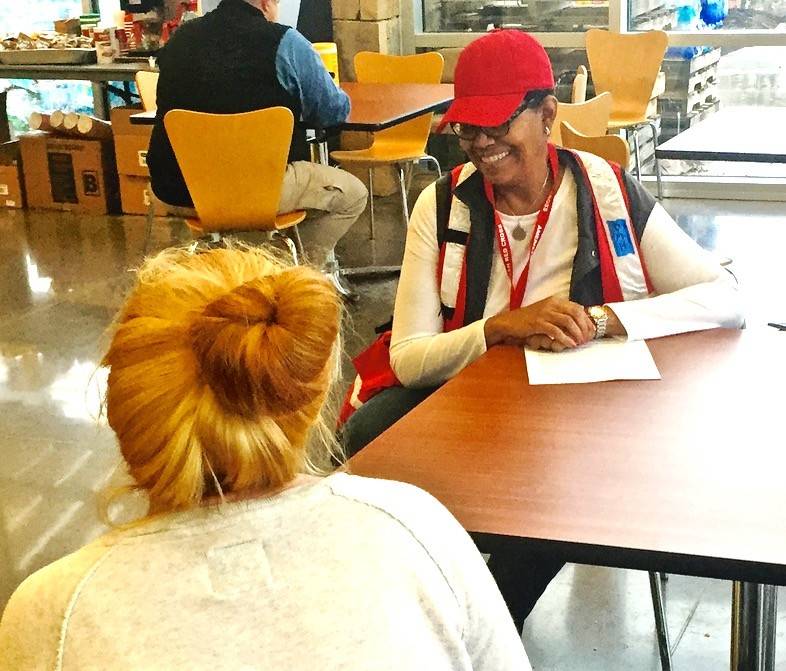 American Red Cross volunteer Karen Bussell of Knoxville talks to a resident at the Red Cross shelter in Gatlinburg after a wildfire swept through the area. Karen is a mental health counselor who talks to those affected by disaster to help them cope with what they have been through.

By Carl Manning, special to redcross.org

Gatlinburg, Tennessee, Dec. 8, 2016 – When fire roared through Tennessee, in the hills surrounding Gatlinburg, many families had only minutes to escape and some did not make it. Such harrowing experiences can trigger emotional distress that is hard to shake.

Helping people deal with the emotional distress triggered by disaster falls to American Red Cross mental health counselors like Karen Bussell, who has been spending her days in Gatlinburg talking to residents whose homes have been destroyed or damaged.

On a recent day, Bussell, a retired school psychologist in Knoxville, approached a man at the Red Cross shelter in Gatlinburg and asked how he was doing. He didn’t want to talk so she moved on. But a couple hours later, he returned and they had a conversation about his experience.

“Having someone who will listen validates self-worth,” Bussell said. “People need to tell their story. That’s part of the healing process and it also helps relieve the emotions to discuss.”

It turns out the man had a harrowing story to tell. When the fire started, he loaded his vehicle with as many of his neighbors as he could and literally drove through the flames to safety. But he couldn’t get everybody out, and that was a failure that gnawed at his soul.

Karen Bussell said that was classic survivor’s guilt – a feeling she said is common among those who escape unharmed from a disaster, while others they know perish.

After awhile she got him to see things from a different perspective.

“He was focused on what he couldn’t do rather than what he did and we got him to start thinking about what he did which was to save a lot lives,” she said.

Often, talking is a good first step toward healing.

“Talking through your traumatic experience helps you organize your thoughts and process what happened and helps the healing. Sometimes it helps with the healing process to say it out loud,” she said.

Bussell pointed out that children often mirror the feelings of their parents. As long as parents seem OK, then so will the children. Also, as long as children have something to do to keep their minds active, they will be distracted from what happened. That’s why at the shelter the Red Cross and its many partners have organized numerous activities for the children.

People under stress feel physically and mentally drained, getting frustrated more quickly and more often. To help manage these feelings, the Red Cross provides people with coping tips during events over which they have no control.

Amid a Flurry of Global Disasters, Red Cross Helping Around the World
.type=article.p=1.f=service%3Adisaster-relief-and-recovery.t=redcross%3AEmergency-Type%7CWildfire
Donate Now