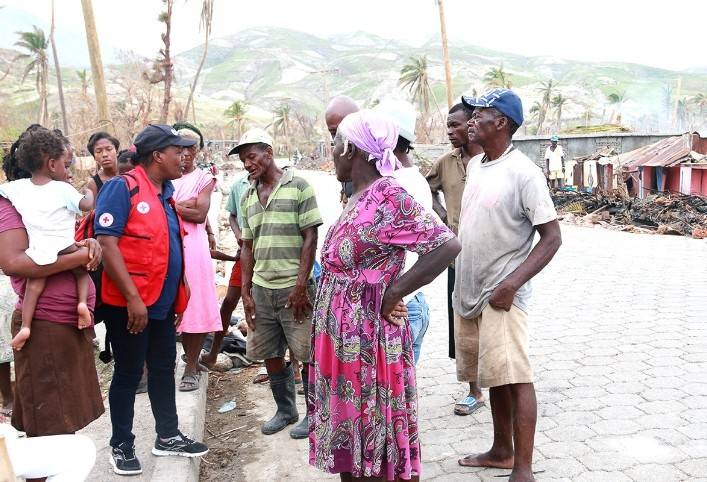 Rode Jean Philippe educates residents about the risks of cholera and encourages people to pick up a cholera kit at a local medical facility. These kits contain water purification tabs, soap, oral rehydration salts and a bucket. Across affected communities in Haiti, the American Red Cross and partners are distributing these supplies to stem the spread of this potentially deadly disease. October 14, Gardois, Coteaux Commune, Sud Department. American Red Cross/Jethro J. Sérémé. 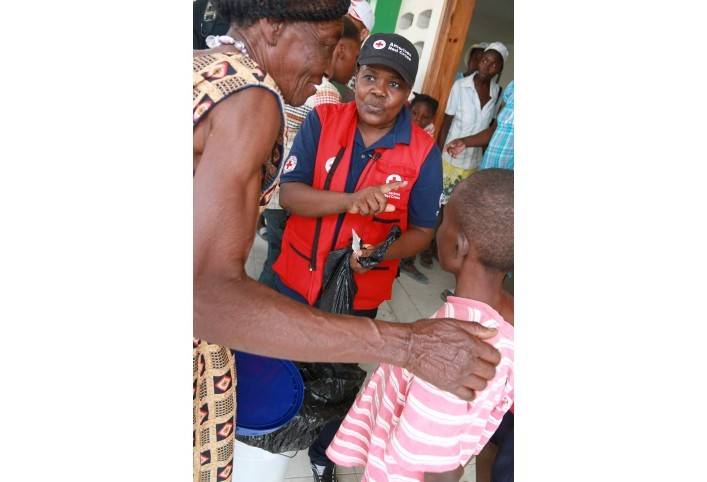 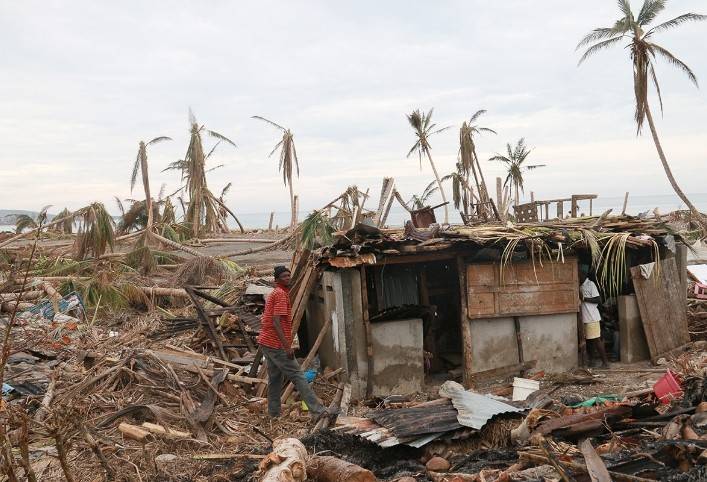 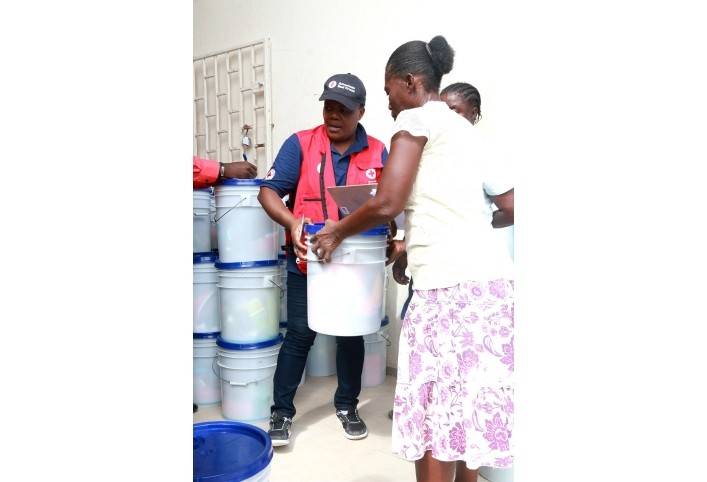 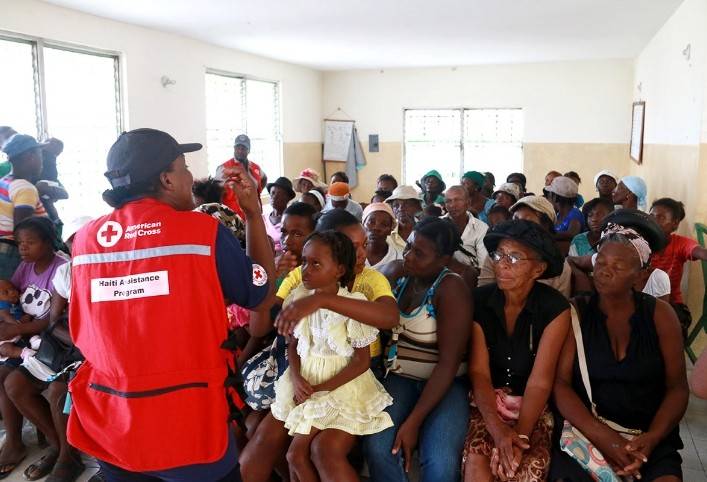 The American Red Cross has nearly 200 staff members based in Haiti (more than 90 percent of whom are Haitian nationals) who manage an array of earthquake recovery programs focusing on health, infrastructure, economic sustainability, disaster preparedness and housing. Along with their day-to-day roles, many of them are also trained to provide emergency relief following large-scale disasters. Prior to Hurricane Matthew’s landfall, we mobilized members of our staff in Haiti to deliver and coordinate relief in some of the most impacted parts of the country: the southern peninsula and the northwest. Rode Jean Phillipe is among our team members who deployed from Port-au-Prince to lend expertise to the relief efforts. She has worked for the American Red Cross, as a Health Coordinator in Carrefour-Feuilles, since January 2013.

Where are you from originally?

Moron, in the Grand'Anse department, which was affected by Hurricane Matthew.

How are you helping people impacted by Hurricane Matthew?

Along with my day-to-day duties in Carrefour-Feuilles, I am also part of an American Red Cross team providing health and water/sanitation during large-scale emergencies. On October 2—in advance of Hurricane Matthew—I traveled from Port-au-Prince to Les Cayes in the Sud Department. Since then I’ve traveled across the region to Port à Piment, Les Anglais, Coteaux, Port-Salut and Roche à Bateau. I help distribute hygiene and cholera-prevention supplies to shelters, clinics and to families of those diagnosed with cholera. I inform people about cholera prevention and treatment measures and show them how to properly use the supplies.

Can you talk about the damage?

The damage is considerable. According to our findings, up to 90% of families in the towns are affected—

even more in the rural sections such as Randel in Chardonières Commune, Cosse in Les Anglais Commune and Fond-Palmiste in Chantal Commune.

We’ve seen so many flooded homes, thousands in fact are completely destroyed or severely damaged. Water systems are damaged. Drainage canals are blocked. Latrines are impacted because of the rising waters. This increases the risk of cholera. And because access to water is a major problem in many areas, the people drink river water. The damage to agriculture, livestock and stored agricultural products is also massive, nearly 100% of crops are completely destroyed in some areas. In terms of infrastructure, the National Electricity network in the South was completely destroyed; roads are only partially accessible and in some parts of the country, not accessible at all. And throughout the region, cell phone networks are down.

Can you talk about the people who you are helping and how they are coping?

This was the case for a mother of four who found shelter in a local church in the locality of Constant in the Commune of Les Anglais. She lived next to the river and her house was flooded. She lost everything. After receiving a hygiene kit and instructions on how to use the items in it, she said to us, "Thank you Jesus, thank you Red Cross!" That’s because the kits contained aquatabs [water purifications tablets] that allowed her family to purify water, so they could drink it. Ever since Hurricane Matthew and the increased risk of cholera, clean water has become so scarce that there was a real risk that her children would die of thirst.

To have so many Haitian Red Cross volunteers has been so important. Working with Haitian Red Cross volunteers to distribute hygiene and Cholera-prevention kits across the Sud Department has been really effective. The local Red Cross branches and their volunteers are very involved and committed and as a result I can sense that the local communities here place a great deal of trust in the Red Cross movement. They recognize the organization’s neutrality and have a great deal of respect for us. They have often told me, "Only the Red Cross can provide us with unbiased assistance!” and “Oh it's the Red Cross, thank God!"

Since before Hurricane Matthew made landfall, the American Red Cross has been working with local and global partners in Haiti, including the Haitian Red Cross, to mobilize and deliver critical relief. That work continues today.

Hurricane Matthew, the largest disaster in Haiti since the 2010 earthquake and the largest storm to hit the country in 50 years, has left widespread flooding, damage to infrastructure (water systems, electricity and roads) and major crop and livestock loss. According to the United Nations 1.4 million people in affected areas are in need of humanitarian assistance.

To learn more about our work in Haiti visit www.redcross.org/haiti. 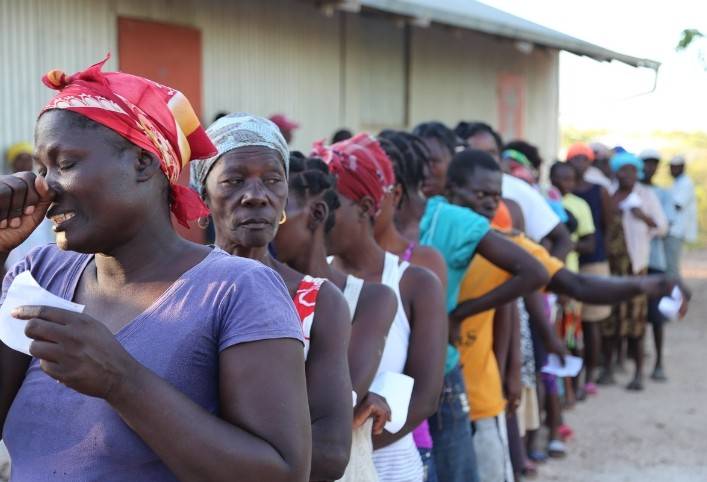 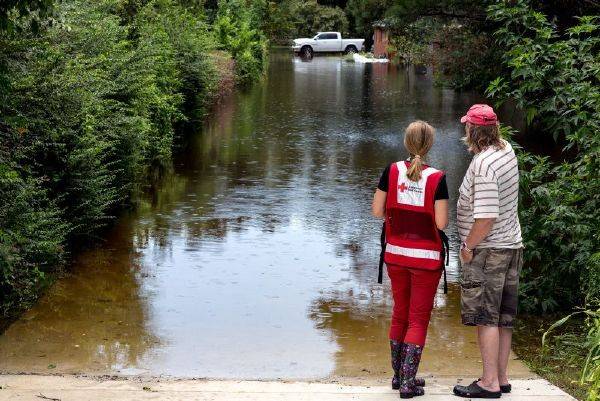 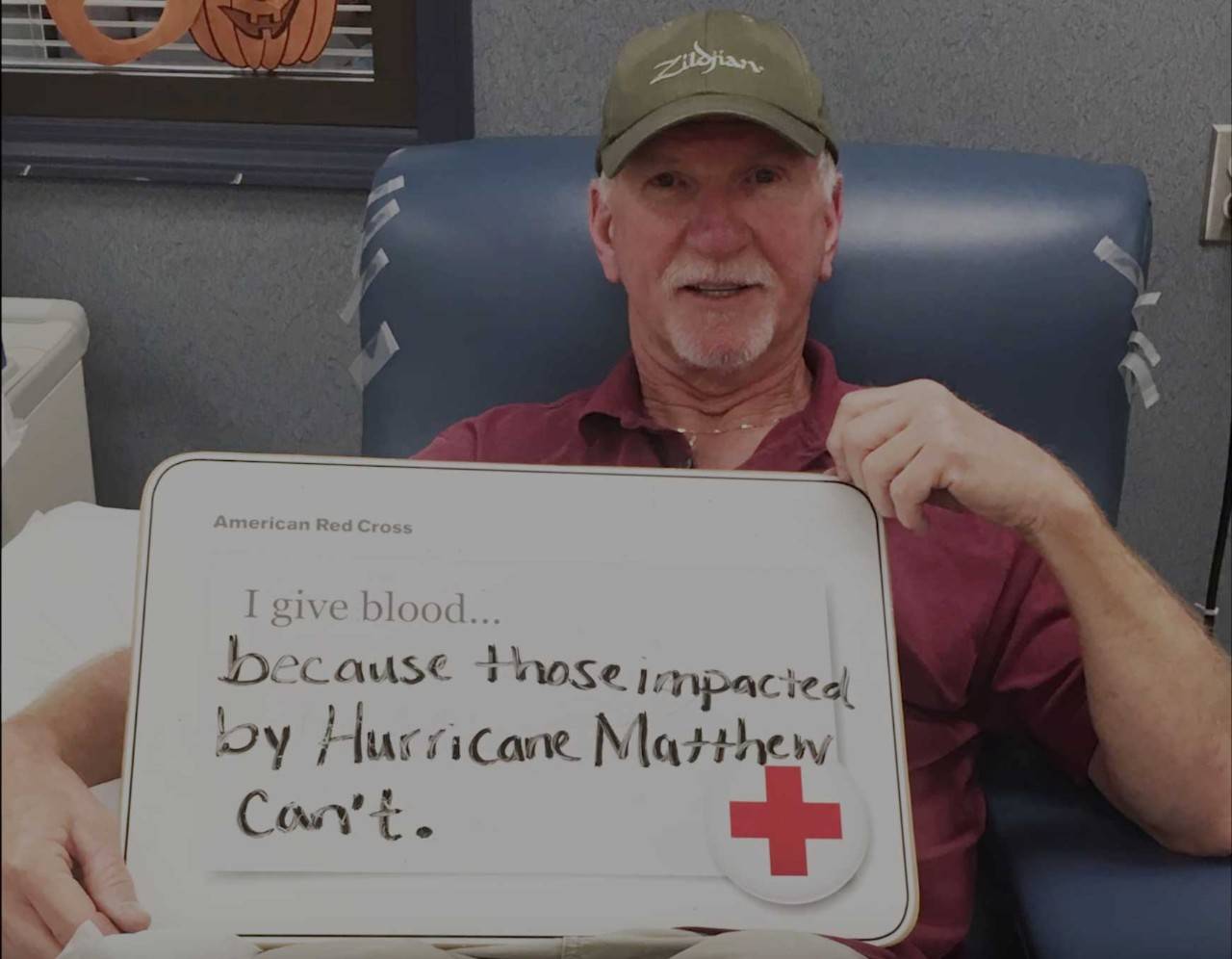 Hurricane Matthew: Roll Up a Sleeve to Replenish the Blood Supply 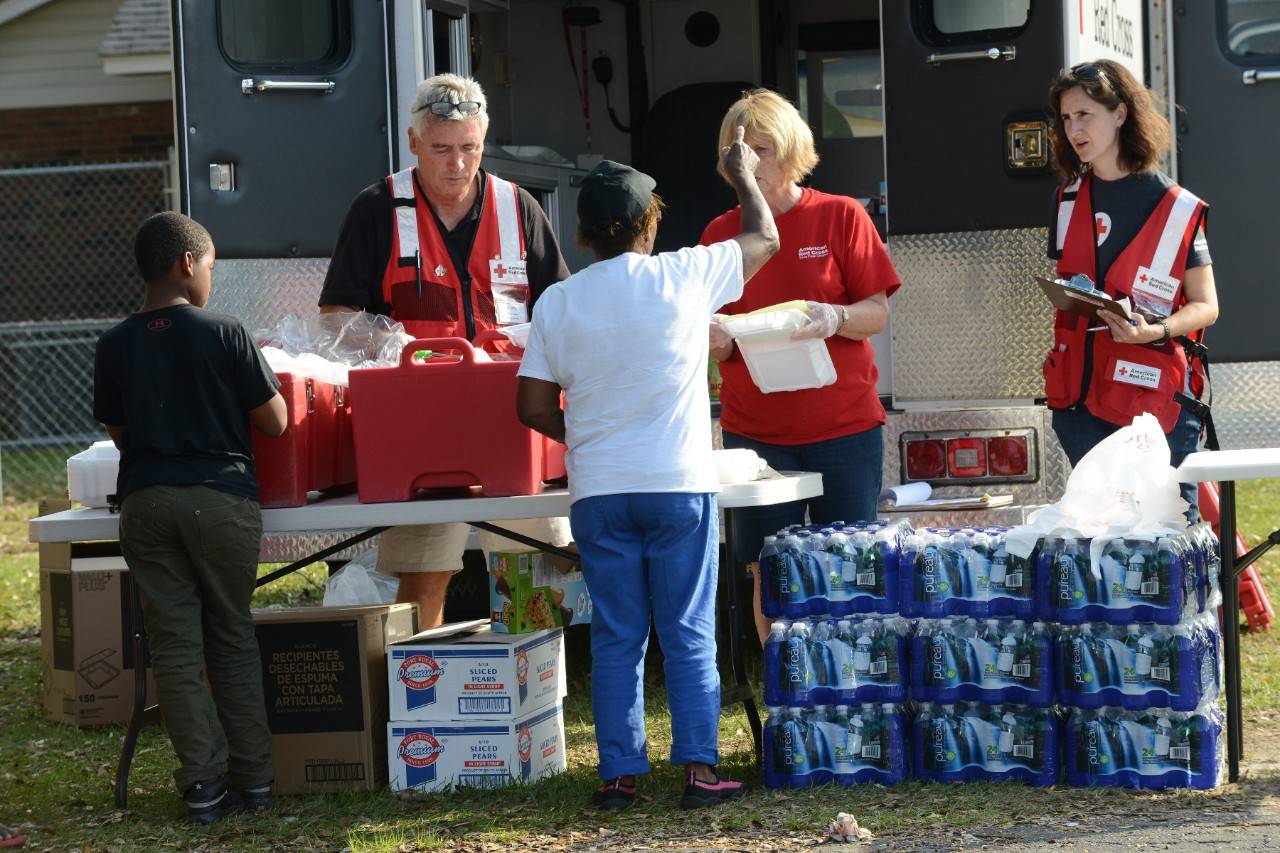