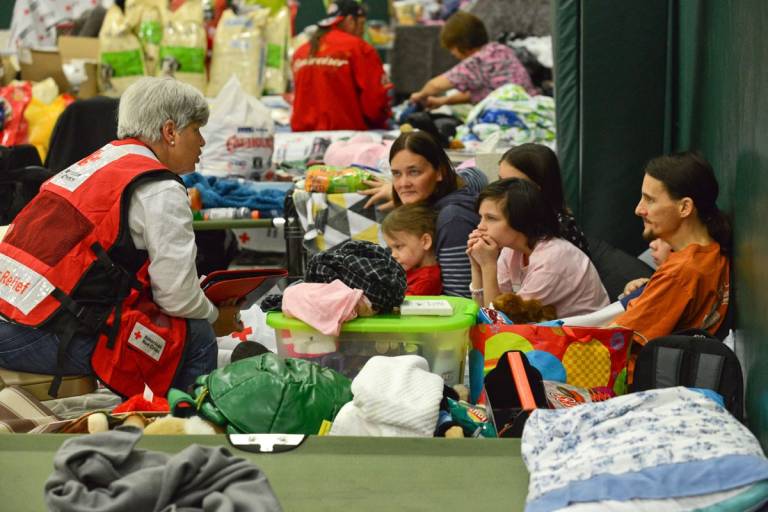 Terry and April Calhoun and their four children lost everything in the Tennessee wildfires. After being forced to flee by running down a highway, they found safety in a Red Cross shelter. (Red Cross photo by Daniel Cima) 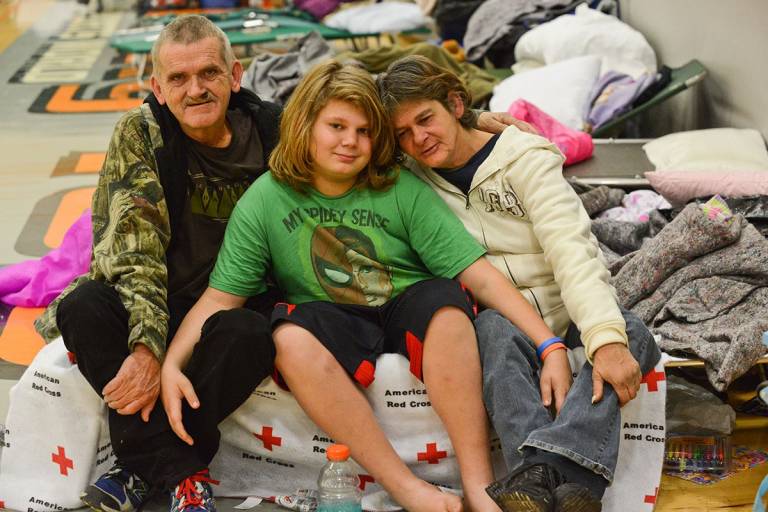 Carol Reynolds and her family were rescued from the wildfires by their neighbor. They don’t know what they will do next, but for now they are safe and warm and being helped by the Red Cross. (Red Cross photo by Daniel Cima) 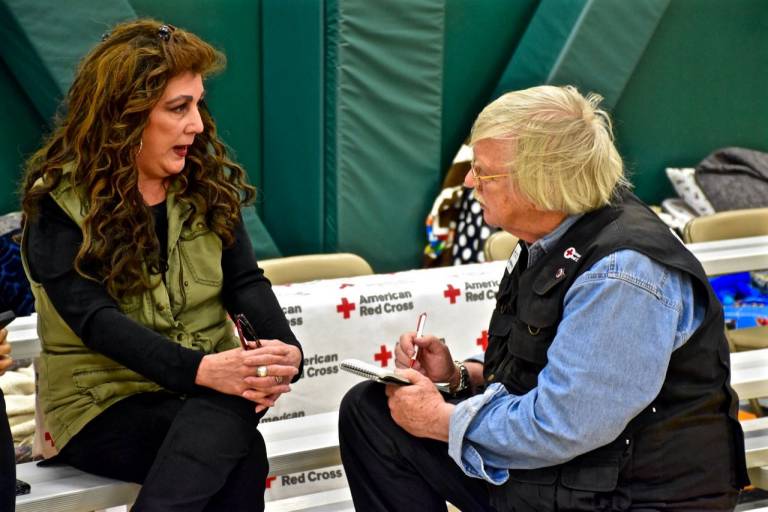 Beverly Black has been coming to the American Red Cross Shelter at Gatlinburg, Tennessee to talk to people who were displaced by the wildfire that swept through the area. (Red Cross photo by Bob Wallace) 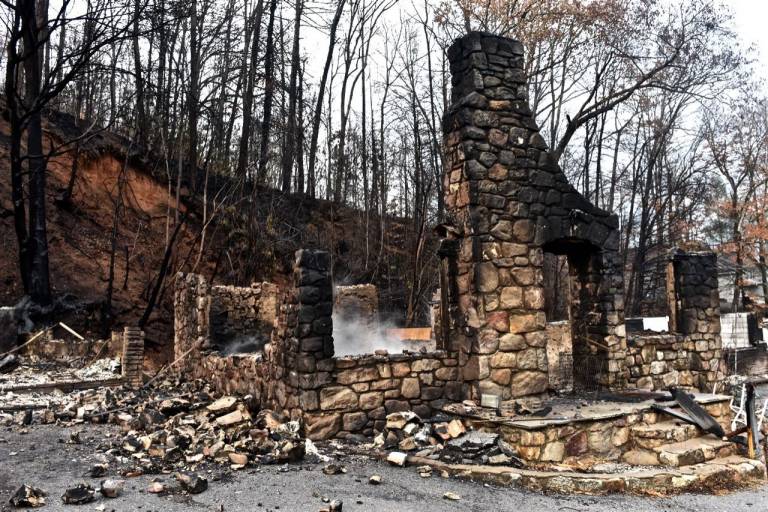 As many as 700 homes and businesses in Tennessee have been affected by the devastating wildfires there. (Red Cross photo by Bob Wallace) 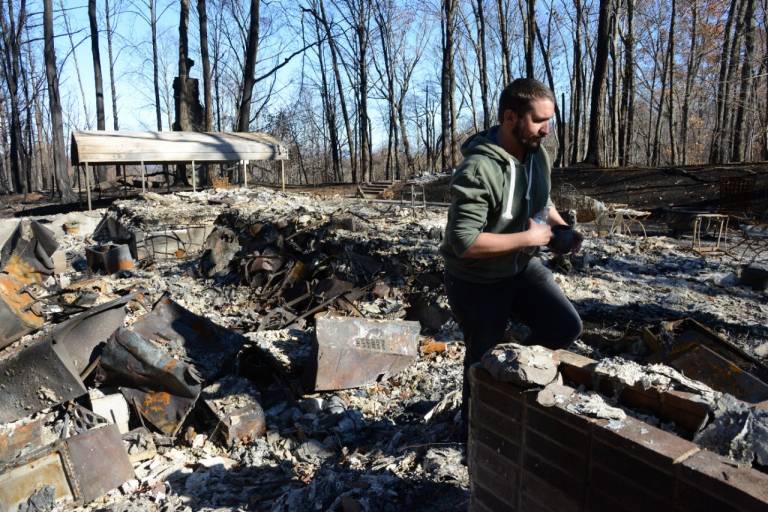 The massive wildfire that affected hundreds of homes and businesses in and around Gatlinburg and Pigeon Forge, Tennessee sprung out of control very quickly, forcing some residents to literally run for their lives. The American Red Cross is there helping as residents cope with the devastating situation.

Red Cross disaster workers are providing shelter, food, health and mental health services and assisting with damage assessment throughout the affected area. They are offering a shoulder to lean on as people talk about how they escaped the flames. Here are a few of those stories:

FAMILY RAN FROM THE FLAMES

“I thought we were going to die. If that angel of a man hadn’t appeared…..if he hadn’t helped us, we would be dead.” April Calhoun, mother of 4, recounts the harrowing story of how she, her husband and their 4 children fled the fires and their miraculous rescue by a mysterious stranger.

The fire started Sunday, November 27 and by Monday night the family was forced to flee for their lives and run down the highway through thick smoke and flames. Calhoun, husband Terry and their children, ages 4, 10, 11 and 13, feared the worst. “Honestly, I’ve never been so scared.” she recalled. “I thought we were going to die.” Husband Terry finishes recounting their terrifying ordeal. “She’s right, we thought we weren’t going to make it. Nobody stopped. We were choking on the smoke and running as fast as we could. I just didn’t know if we were going to make it.”

Suddenly, across the road they saw help. “We saw a silver pickup truck.” Mr. Calhoun said. “A man ran towards us and told us to get in.” This mysterious man drove the family to the safety of the community center. “All we know is that he said he was a veteran and was from Cosby (a nearby town). But we never saw him again and we don’t know his name.”

The Calhoun family has lost everything. They have no car and no home. Still, they continue to give thanks and praise to not only their mysterious angel, but to the Red Cross and the volunteers at the shelter housed in the Rocky Top Sports Complex. “They’ve done an awesome job helping us, feeding us and making sure we’re ok. I can’t thank them enough. So many folks here are trying to help us, and we really appreciate it. We’re safe now, and that’s what’s important,” Calhoun said. “But, I hope you can find our angel and tell him ‘thank you’ for saving our lives.”

NEIGHBOR IS THEIR HERO

“If it hadn’t been for my neighbor, Cindy, we’d all be dead.” Carol Reynolds from Gatlinburg, Tennessee, recalls how she and her family of 6 made their narrow escape from the flames. “My neighbor is a hero. She saved our lives.”

Reynolds was at work and there was smoke from the fire settling in the valley, but she and her family saw blue sky and were told the fire was miles away, not to worry. This situation changed in just a few hours. Reynolds recalls, “The sky turned red and ash was falling from the sky. The wind was terrible and blowing so hard! I got home and told the kids to take some of their favorite things, that maybe we need to be prepared to leave……just in case.”

Less than an hour later the family was fleeing for their lives. Reynold’s husband looked outside the window and saw flames. They decided they had to leave right then and started out the door and down the road. “My neighbor, Cindy saw us and piled all of us, including the dog, into her little car and got us all down the mountain safely. If she hadn’t taken us out, we’d be dead. She’s our hero!”

Reynolds and her family are now staying in the Red Cross shelter. Their future is uncertain and this weighs heavily on them. “I don’t know what we’re going to do or where we are going to go. But for now, we’re safe. I need to remember that. Folks have been so kind, so many people helping. Thank you, and thank you to our hero Cindy. She saved our lives.”

HELP IN COMFORTING OTHERS

It was the loss of a longtime friend and the parting of ways with the dog she loves that brought Beverly Black to the Red Cross shelter where she found comfort in helping others.

The shelter opened when a wildfire swept through some 17,000 acres of the Great Smoky Mountains, damaging and destroying hundreds of homes. Black’s Gatlinburg home was spared, but she feared the worse for the Rev. Ed Taylor, who once headed the chapel where she served as his associate.

Nobody has seen him since the night of the fire when his home was reduced to rubble. Bebe, his little black poodle, was found wandering in the yard after the fire and brought to the Red Cross shelter by law enforcement officers.

“Most likely he’s gone and I realize that, but I haven’t given up hope,” she said. “Whatever they find, I know he’s in a better place.”

It was her feeling of loss made Black decide that she should come to the shelter and spend time with those displaced by the fire.

“They have a lot on their hearts. We all do,” she said. “It’s not about me but about what the Lord is doing through me. Everybody needs to know they are loved and that we’ll get through this together.”

Beverly said while she’s trying to help comfort those who have lost so much, she also is being comforted. “I’m going to be here as long as I can help people,” she said. “I need them as well as they need me because I’m hurting too.”

HOW TO HELP Assisting people affected by the wildfires is the latest relief response in what has been a very busy year for the Red Cross, which responded to 15 large disasters across the country this year, 50 percent more than in 2015. More than 24,000 Red Cross disaster volunteers from all over the country provided the following this year:

Help people affected by disasters like wildfires, hurricanes, floods and countless other crises by making a donation to Red Cross Disaster Relief. Your gift enables the Red Cross to prepare for, respond to and help people recover from disasters big and small across the United States. Visit redcross.org, call 1-800-RED CROSS or text the word REDCROSS to 90999 to make a $10 donation.

Amid a Flurry of Global Disasters, Red Cross Helping Around the World
.type=article.p=1.f=service%3Adisaster-relief-and-recovery.t=redcross%3AEmergency-Type%7CWildfire
Donate Now