Empire State Building To Be Lit In Red And White Tonight

Empire State Building To Be Lit In Red And White Tonight 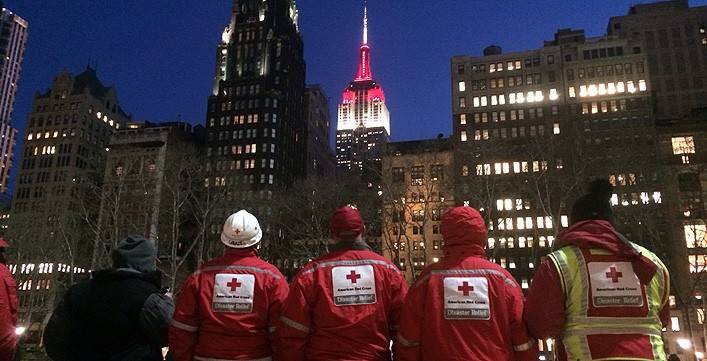 WASHINGTON, D.C. (Tuesday, March 29, 2016) — The month of March has long been a time to recognize the mission of the American Red Cross and those who help fulfill its unique mission. In honor of the 134-year-old organization, on Tuesday, March 29, the Empire State Building will be lit in red and white.

Across the country, many Red Cross regions and chapters are celebrating March Is Red Cross Month, and the support the organization gives to thousands of people in need. In particular, the Red Cross responds to help the victims of home fires and other emergencies, and just in the last few months the Red Cross has been responding to the need for assistance to thousands of people across the country affected by natural disasters including the South Carolina floods, the California and Oregon wildfires, and tornadoes and flooding in the southeast.

“The Red Cross is grateful for the everyday heroes – our volunteers – who make a difference in communities across the United States, 24 hours a day, seven days a week,” said Red Cross President and CEO Gail J. McGovern. “Our mission is to help those in need, and we wouldn’t be able to carry out this lifesaving work without the support of the American people.”

Every year, the Red Cross responds to nearly 66,000 disasters – the vast majority being home fires – where a family has lost everything: the roof over their heads, their clothes, and their most cherished possessions. This special tribute at the Empire State Building also helps recognize individuals from across the country, including generous blood and financial donors, dedicated volunteers and vital partners.

Donations can be made now by visiting www.redcross.org or a $10 donation can be made by texting REDCROSS to 90999.