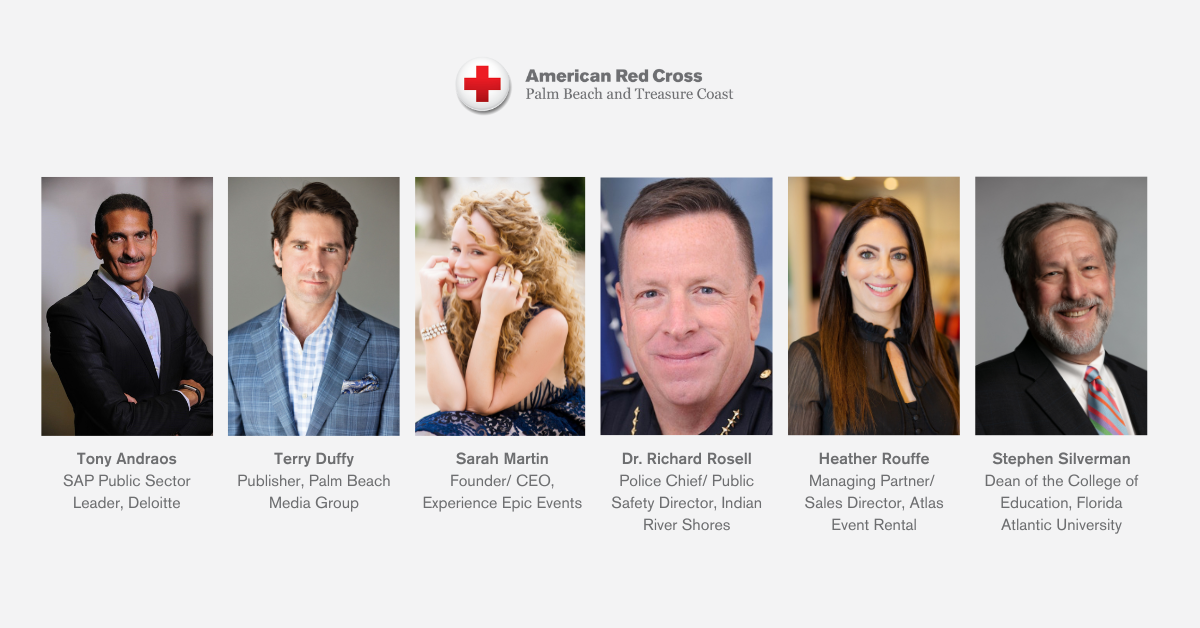 WEST PALM BEACH, Fla. (December 1, 2022) – The Palm Beach and Treasure Coast Chapter of the American Red Cross announced that Tony Andraos, Terry Duffy, Sarah Martin, Dr. Richard Rosell, Heather Rouffe and Stephen Silverman joined its Board of Directors, a team made up of local business and civic leaders who give of their time, expertise and compassion in support of Red Cross humanitarian services.

The American Red Cross Palm Beach and Treasure Coast Board of Directors not only ensure the needs of the community are met with Red Cross programs and services but also helps to champion the organization’s goals and successes while playing an important role in capacity building and fundraising. The Board is assisting with ensuring the success of the highly anticipated 62nd International Red Cross Ball, which will be held March 18, 2023, at The Breakers Palm Beach and features ambassadors and foreign dignitaries from around the world.

Tony Andraos is a consulting leader with over 25 years of experience. He has provided strategic and technology consulting services to public sector and commercial organizations. He is a leader within Deloitte’s consulting and has extensive experience in designing and implementing technology-enabled business solutions. He has led the development and execution of go-to-market strategies for 5 major accounts to increase Deloitte’s technology portfolio and footprint, which contributed to a revenue increase of over 60%. Tony Lives part-time in Palm Beach and Northern Virginia with his wife, Jackie. They have one daughter Joelle and a havapoo dog named Milo.

Terry Duffy, a native New Englander, has lived in Florida since 1992 with his wife Lauren. Two daughters round out the family, with one living in West Palm Beach and the other in Tampa. In 2019, Terry and Lauren moved from Miami to West Palm Beach. He is currently responsible for all sales and marketing activities as well as production and manufacturing operations for Palm Beach Media Group (PBMG). During his time as Group Publisher, PBMG has more than tripled the number of publications produced each year and has a staff of seventy across the State. He and Lauren are both very involved in their new community attending charitable events and activities throughout the year. He is pleased to contribute to his new community through this opportunity with the American Red Cross in Palm Beach County.

Sarah Martin is a proud mother, wife and Founder/CEO of Experience Epic Events, created ten years ago. With 25 years in the industry, Sarah has brought her firecracker energy to her events, creating excitement and innovation to the private, corporate and destination event industry. She has grown her events production/planning agency to serve companies and brands nationwide, including NFL Super Bowl, United States Presidential Debate, Major League Lacrosse, Casa de Montecristo and more. She has built a team that can easily boast of their resourcefulness in materializing the right partnerships for events and engaged businesses with a combined $17,000,000 in in-kind and cash sponsorships. She is excited to join the Red Cross as her mother was also a volunteer. Sarah has also made Red Cross the charity of choice for a series of events this season.

Dr. Richard Rosell has been a dedicated public servant for 40 years. He is a retired Captain in the New Jersey State Police, a former Director for the town of Dover, NJ Police and Fire Departments, and a former Director for the Township of Springfield, NJ Police and Fire Departments. For the past seven-plus years, he has served as the Police Chief and Public Safety Director for the Town of Indian River Shores, FL. He holds a Doctorate from Drew University, a master’s from the Naval Postgraduate School, a master’s from Seton Hall University, and a bachelor’s from Thomas Edison State University. He is a graduate of the FBI National Academy. He served a total of 32 years in the US Marine Corps, the Army National Guard, and the Army Reserve. He retired in 2019.

Heather Rouffe is the Managing Partner of Atlas Event Rental, which has storefronts in Miami, Palm Beach and Martin County, and serves all of South Florida. Atlas is a high-end, full-service event rental company and has been family-owned and operated for over 30 years. Recently named one of the 30 top rental companies by Special Events magazine, Atlas provides top-quality products and unparalleled customer service and has been a part of many high-caliber events, such as celebrity weddings, Presidential debates, the Super Bowl, and Art Basel, to name a few. Heather started a career with Atlas over 15 years ago and in 2012 became managing partner. Heather lives in Boynton Beach and is the proud mother of two children.

Stephen Silverman is dean and professor of the College of Education at Florida Atlantic University. He joined FAU after more than two decades at Teachers College, Columbia University where he was a professor, department chair and senior advisor to the provost for research preparation, and where he now is a professor emeritus. A past chair of the NASPE Curriculum and Instruction Academy, Dean Silverman, also served as co-chair of the Physical Activity and Physical Education Expert Panel of the American Academy of Pediatrics. Stephen also served as national chair of Health and Safety Services for the American Red Cross and was a member of the Physical Education Standards Committee of the National Board of Professional Teaching Standards.

“The Board of Directors for the Palm Beach and Treasure Coast Chapter plays a significant role in ensuring the Red Cross can carry out our mission locally, regionally and even nationally,” said Eric Roby, Executive Director for the chapter. “I am grateful for the Board’s dedication, and with the addition of these highly respected and successful Board members, I am positive the Palm Beach and Treasure Coast Board will have a great impact on our community. By utilizing the talents and passion of our Board members, the Red Cross is better able to offer life-saving programs, support veterans and military families, respond to disasters when needed most and much more.”

The American Red Cross shelters, feeds and provides emotional support to victims of disasters; supplies about 40 percent of the nation's blood; teaches skills that save lives; provides international humanitarian aid; and supports military members and their families. The Red Cross is a not-for-profit organization that depends on volunteers and the generosity of the American public to perform its mission. For more information, please visit redcross.org/southflorida or visit us on Facebook or Twitter at @SFLRedCross.