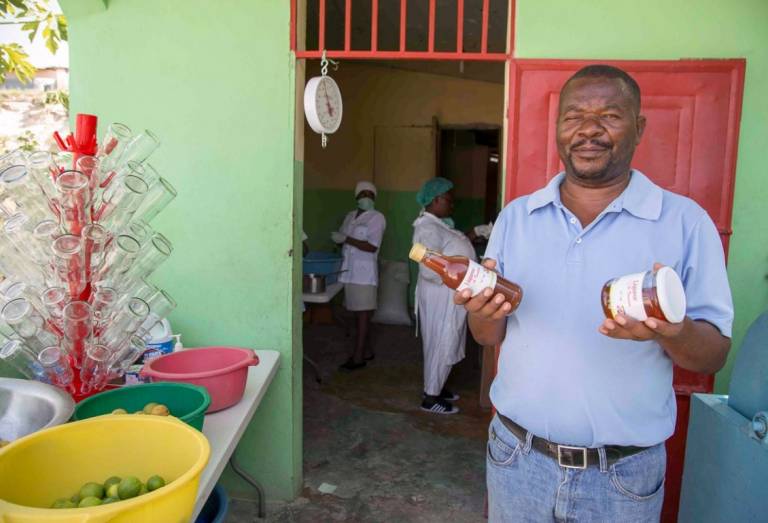 Ferdinand Estinord received seed money from the American Red Cross to start a business that buys local produce and turns it into value-added products, such as jams and liqueurs. Ferdinand lives in Canaan, Haiti, and has hired 15 of his neighbors to help with the business. Photo: Jethro J. Sérémé/American Red Cross 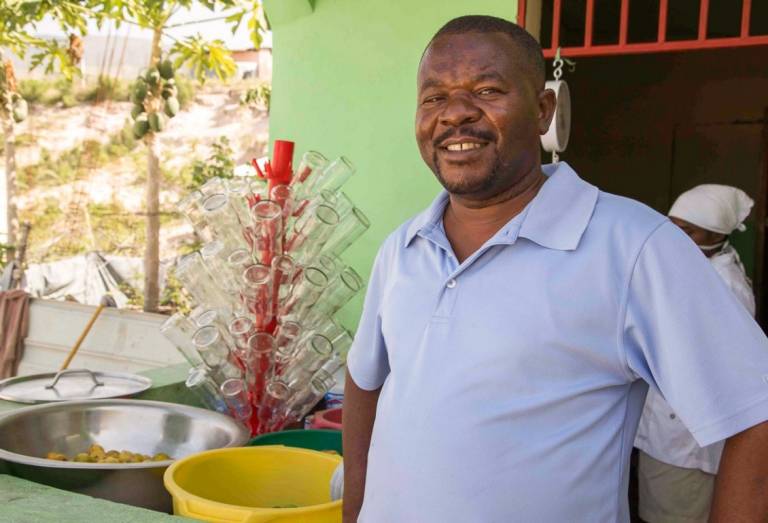 "My lifelong dream is being achieved thanks to the program of the American Red Cross,” says Ferdinand, who was able to start his food business with seed money and technical assistance. Photo: Jethro J. Sérémé/American Red Cross 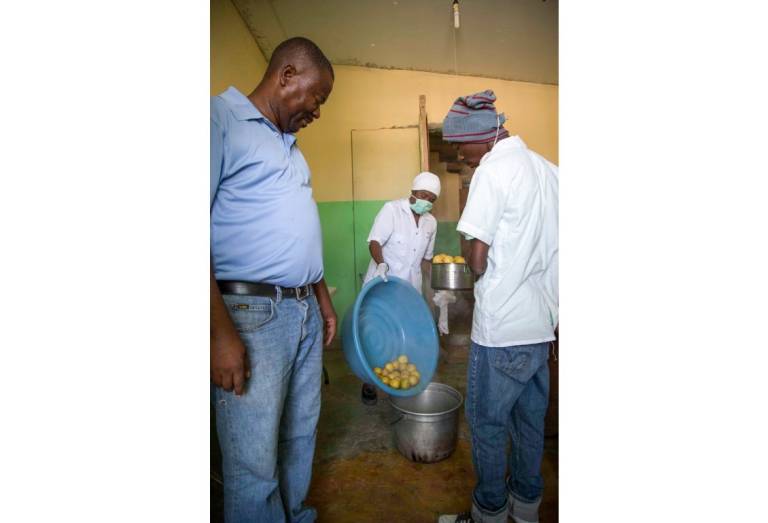 Ferdinand Estinord has a track record of thinking outside the box. After the 2010 Haiti earthquake laid devastation to Port-au-Prince and surrounding areas, he decided to move his family somewhere new: Canaan—a previously uninhabited stretch of land about an hour’s drive from the capital city.

Hilly and arid, with big skies and expansive views, Canaan feels like a place filled with hope and possibility.

Ferdinand’s family was one of the first to arrive in Canaan to build a new life in the earthquake’s aftermath, but they were not the last. Over the past eight years, more than 200,000 people have moved to the area—which is prone to flooding and other disasters. In an effort to help Canaan’s neighborhoods develop safely and with disaster resilience in mind, the American Red Cross is investing more than $20 million to ensure essential urban planning, basic services (water, electricity, roads, etc.), safe construction, job and entrepreneurship opportunities, disaster risk reduction, health, and environmental awareness.

As part of this work, the American Red Cross is equipping several small- and medium-sized business owners with the skills and funding they need to run strong, sustainable businesses. For Ferdinand, this aid has helped him realize his dreams.

After settling in Canaan with his wife and four children in 2010, Ferdinand started a food depot—selling to neighbors who had also recently moved to the area. He allowed them to buy on credit, but the economic situation wasn’t ideal. People weren’t able to pay Ferdinand in time and his business soon went bankrupt.

Determined to make a viable food enterprise in Canaan, Ferdinand kept trying. He recently wrote a business plan and competed against 360 other hopeful entrepreneurs for seed money. The competition—funded by the American Red Cross and implemented by PADF and Global Communities—chose 26 winners to receive seed money and technical assistance for their businesses.

Ferdinand’s idea—to buy local produce and turn it into value-added products—was chosen. He received $10,000 USD to help set up his business, which he named ONASOM, Transformation and Production. The seed money enabled Ferdinand to buy essential equipment such as a coffee roaster, a mill, a refrigerator, grill, kitchen supplies, and a laptop.

His company buys local produce from Canaan merchants and turns it into jams, creams, and liqueurs. Mangoes, aloe, tamarind, and passion fruit are all on rotation. ONASOM also makes peanut butter, chanm-chanm (a Haitian specialty) coffee grounds, and cocoa powder.

In August, Ferdinand trained and hired fifteen people—all of them residents of Canaan—to work at his company. Twelve are part-time employees and three are full-time staff. It is impressive growth and one that’s helping his neighbors to be economically self-sufficient, along with his own family.

Ferdinand can’t help but compare OMASOM’s success with that of his previous food depot, saying, “Today, I am experiencing another reality. I have the resources to run my business. Before, I would not be able to set up this business. Where would I find the funds for such project?”

Ferdinand is determined to keep this new business going. He has been in contact with the leaders of the National Association of Fruit Transformation, an approach which could allow him to sell his products throughout the Haitian national market.

"My lifelong dream is being achieved thanks to the program of the American Red Cross,” says Ferdinand.

For more information about how people in Haiti are still benefiting from American Red Cross assistance, eight years after the earthquake, visit redcross.org/Haiti.

Canaan was completely unoccupied before the 2010 earthquake. After the quake, the government made the land available for people to live. Average Haitian families have invested more than $100 million USD of their own money to settle there and develop the neighborhoods they want to live in. The American Red Cross is investing more than $20 million USD to ensure essential urban planning, basic services (such as water, electricity, and roads), safe construction, job and entrepreneurship opportunities, disaster risk reduction, health, environmental awareness, re-introduction of thousands of trees, and development of public spaces.

Individuals and corporations donated generously in the aftermath of the Haiti earthquake and the Americans Red Cross is still utilizing the $488 million in funds received to help people build back safer, healthier, and more resilient to future disasters. Donations to the American Red Cross for Haiti earthquake relief and recovery helped save lives in the wake of the massive disaster. In fact, we spent nearly one-third of donations on helping keep people alive in the first six months alone. These generous donations are still at work in Haiti, having been invested in strengthening Haiti’s medical capacity, water systems, infrastructure, economic sustainability, disaster preparedness, and availability of safe housing. Financial information and additional details are available at redcross.org/Haiti.