In Cox’s Bazar, “Each and Every Person Here Has Huge Potential”

In Cox’s Bazar, “Each and Every Person Here Has Huge Potential” 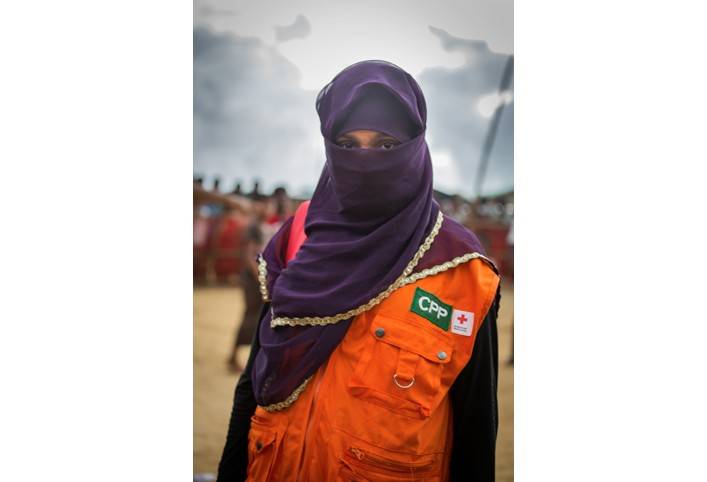 “I have learned many things about what to do when the rains come. I want to share these skills with my neighbors,” says Yesminara—a cyclone preparedness volunteer. 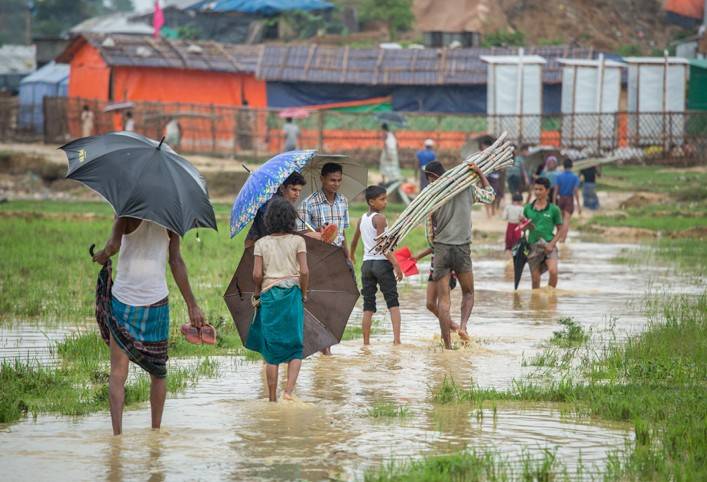 A typical scene in Kutupalong when it rains. Cox’s Bazar is known for heavy rain and wind during the monsoon months of June, July and August. 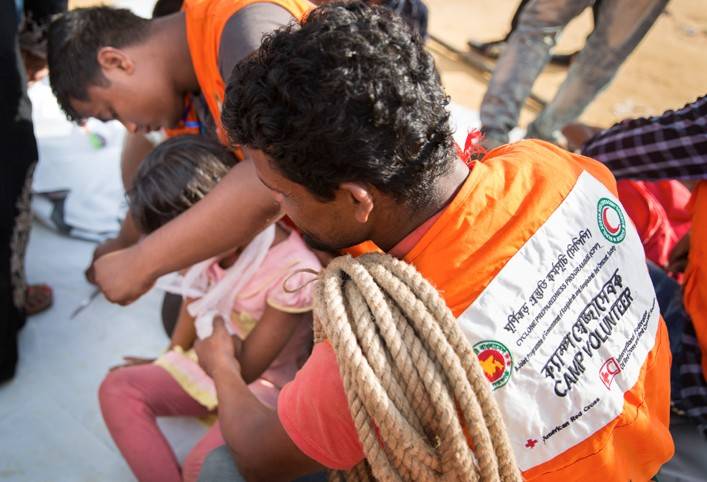 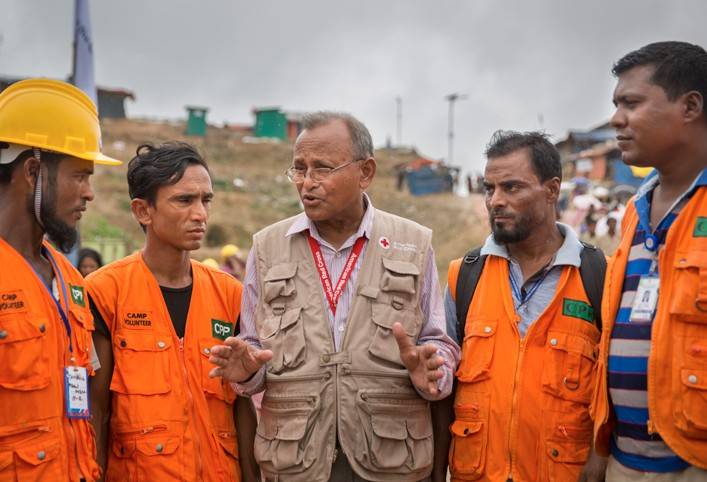 Harun al Rashid, an American Red Cross staff member and one of the original founders of CPP, speaks to disaster preparedness volunteers in Kutupalong. The team is getting ready for a simulation in front of hundreds of camp residents. 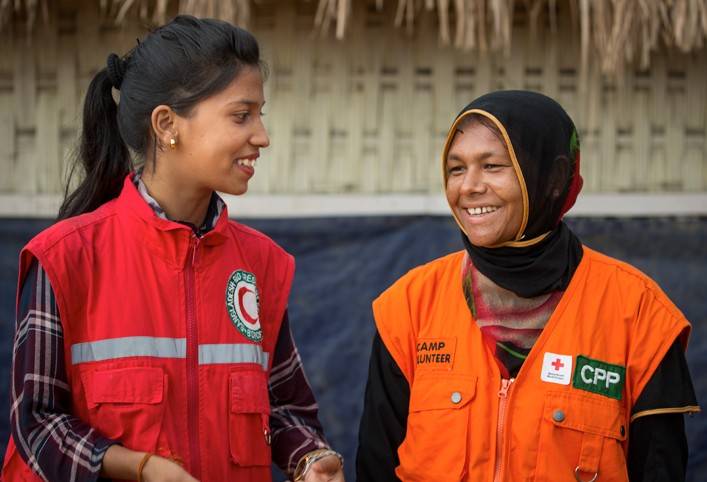 “I am working for my people. For my neighbors. For my family,” says Monoarca Begume (right)—a resident of Kutupalong camp. 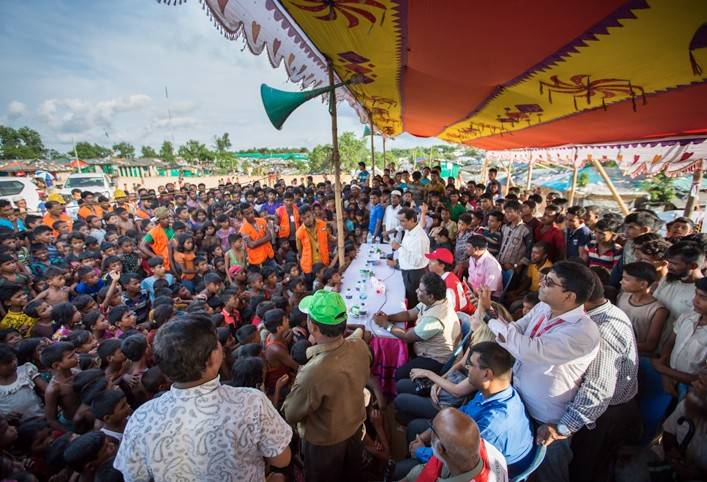 A crowd of people in Cox’s Bazar listens to disaster preparedness messaging after a cyclone simulation. Hundreds gathered to watch and learn about early warning systems in the camp where they’re living.

When rain falls in Kutupalong—a temporary home for displaced families in Cox’s Bazar, Bangladesh—it’s not merely an inconvenience. It’s a hazard. Within minutes of a downpour the walkways become slippery mud; the fields turn to puddles; and people’s roofs start to leak. For the hundreds of thousands of people living in Kutupalong, this is life during monsoon season.

Since August 2017, more than 600,000 people have fled Rakhine state, Myanmar to seek safety in Cox’s Bazar. Many arrive injured, malnourished, and traumatized. They speak of dangerous journeys—walking for days on end just to reach the border. Once in Bangladesh, they crowd into sprawling camps on unstable hillsides—and live in structures made of bamboo, plastic, cardboard and sometimes corrugated metal sheeting.

Cox’s Bazar is known for heavy rain and wind during the monsoon months of June, July and August. Families here know the season will be difficult, especially given the temporary homes they occupy. Heavy rain, flooding, landslides, cyclones, and water-borne illnesses are all possibilities.

But the families here are survivors. And they are determined to keep surviving. With support from the American Red Cross, they are helping themselves to prepare for whatever weather may come their way.

As part of the Bangladesh government’s Cyclone Preparedness Program (CPP), the American Red Cross, Bangladesh Red Crescent, and the International Federation of Red Cross and Red Crescent Societies (IFRC) are training volunteers on disaster preparedness, first aid, early warning systems, and other lifesaving skills. Given the camp’s proximity to local towns, the preparedness teams are composed of camp residents and locals from the host community.

Monoarca Begume is one of the camp volunteers. “I am working for my people. For my neighbors. For my family,” she says with determination. She’s part of a team that will warn fellow residents of danger—like cyclones or flooding—via mega phones, a flag system, and even loudspeakers at mosques. Monoarca is slated to learn first aid soon—so she can be a first responder, if needed, in the camp.

“I have learned many things about what to do when the rains come. I want to share these skills with my neighbors,” says Yesminara—another camp resident. She and her team recently participated in a disaster simulation in the camp, as hundreds of families watched and learned. Yesminara and her team used the equipment provided to them—megaphones, sirens, flags, first aid kits, helmets, life jackets, boots, and radios—to teach the community about what will happen if a cyclone strikes. The crowd sighed, clapped, and hollered as the simulation played out in front of them.

“It is high-time we teach people in the camp about disaster preparedness,” remarks Akter—another volunteer who participated in the simulation. His neighbors, he says, are hungry for safety and preparedness information. After delights that his friends gather over tea to ask him about the lessons from his training. His wife has started disseminating information to mothers in camp, as well.

Bangladesh is one of the most disaster-prone countries in the world, so there is no doubt that investments in disaster preparedness save lives. American Red Cross’s work in Kutupalong—and in nearby Teknaf, where other displaced families are living—represents not just a financial investment, but a belief in the local teams prepping for cyclones.

Harun al Rashid, an American Red Cross staff member and one of the original founders of CPP in 1972, believes very deeply in the teams he’s training. “Each and every person here has huge potential. We just have to bring it out.” Indeed, this potential is unfolding in the camps every single day. 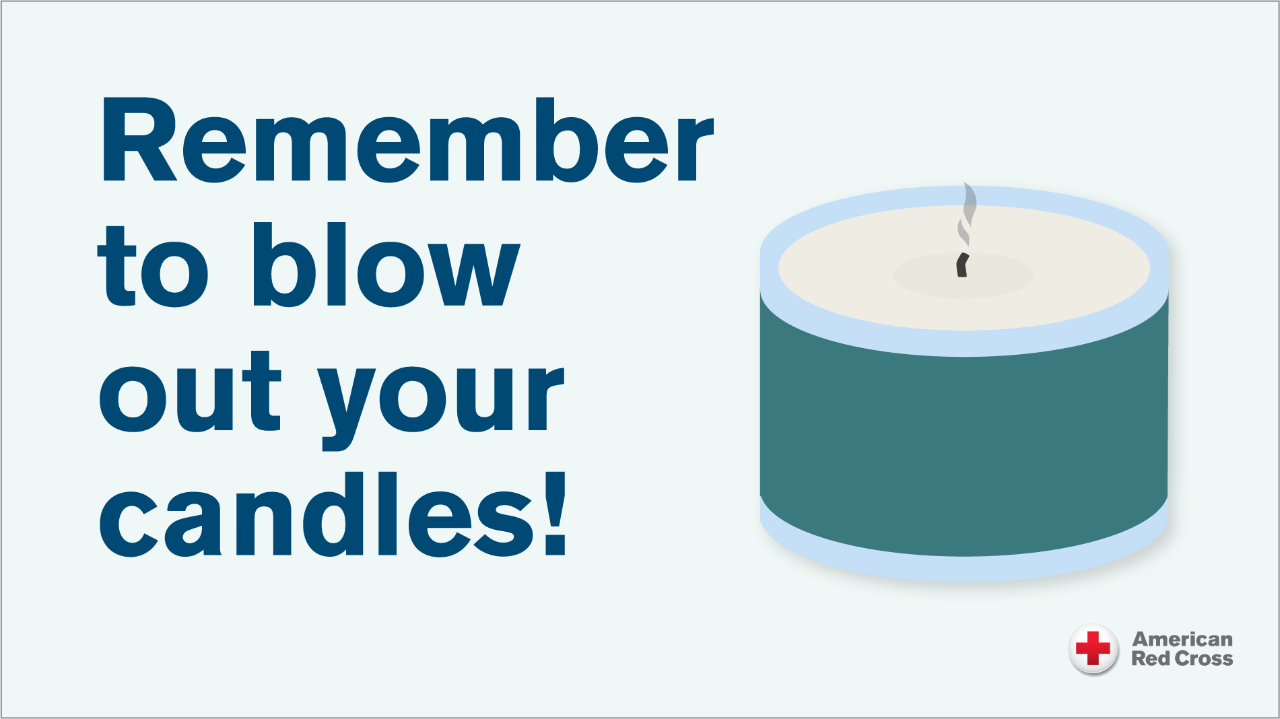