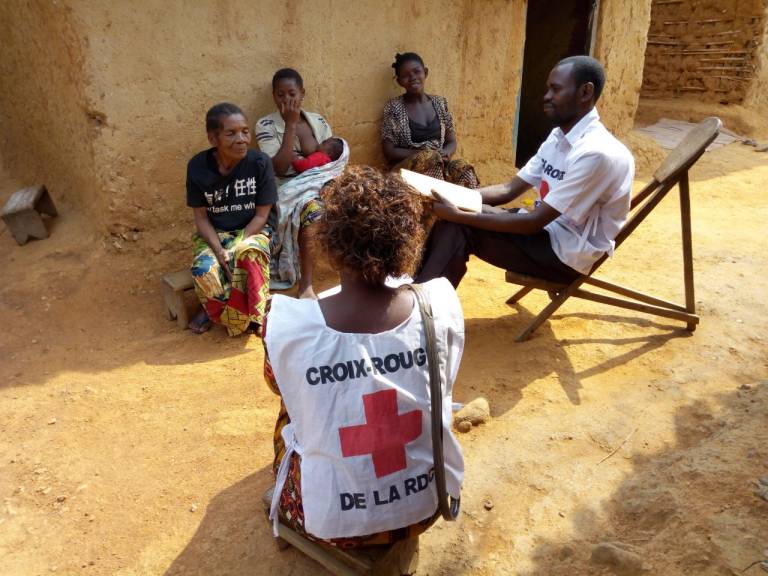 Red Cross volunteers in DR Congo are from the communities they serve. They regularly visit homes in Ebola-affected areas to gather residents’ concerns, fight misconceptions about the disease, and answer questions about care. 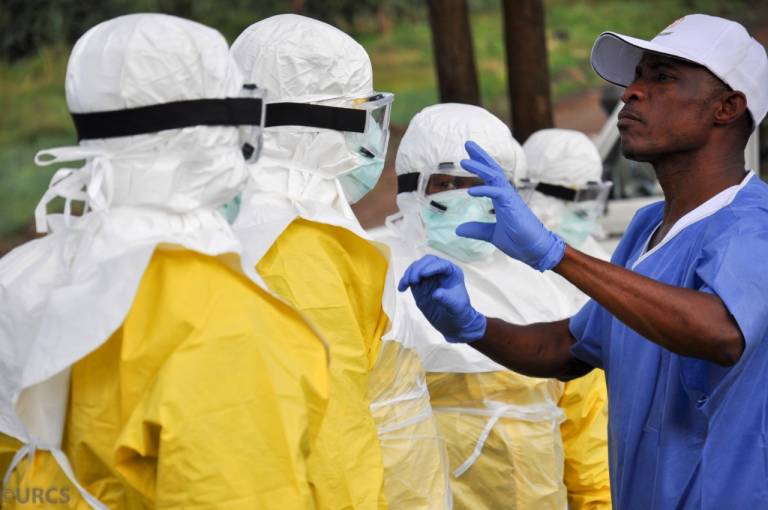 A Red Cross team in Western Uganda demonstrates how to conduct safe and dignified burials. Uganda Red Cross uses theatre in communities to disseminate information about Ebola and preventing its spread into communities bordering DR Congo. 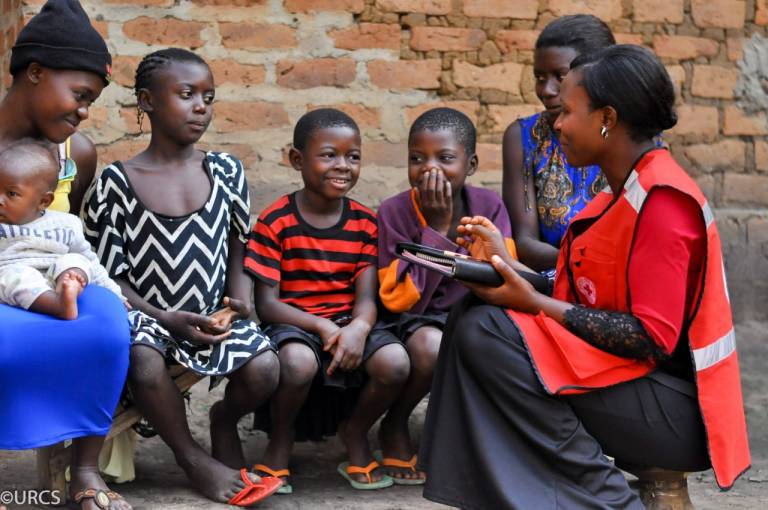 Karungi Shamillah, 27, has been a volunteer for four months in her own community in Majada, Uganda, close to the DR Cong border. Shamillah educates families about Ebola so they can recognize the signs of the virus, get help for the loved ones, and alert authorities.

Since August, the Democratic Republic of the Congo (DR Congo) has been facing the worst Ebola outbreak in its history. Violence and armed conflict in the region have made outbreak response a complex and delicate operation.

“I was speaking with some colleagues yesterday who have 35-40 years in the industry. And it was unanimous: this is the most complex humanitarian situation that they’ve ever been on,” remarks Jamie LeSueur from his post in the DR Congo. “We’re tackling an Ebola crisis in a war zone.”

LeSueur, head of Ebola operations for the International Federation of Red Cross and Red Crescent Societies (IFRC), has been working to stem the outbreak alongside a skilled team of Red Cross staff and volunteers from DR Congo and around the globe. Listen to a short conversation between LeSueur and National Public Radio (NPR) at: https://www.wbur.org/hereandnow/2019/02/12/ebola-congo-aid-worker.

The DR Congo Red Cross has a strong capacity to respond to Ebola, with skilled volunteers based across the country. Red Cross teams in DR Congo played a key role in containing the last Ebola outbreak, which ended in late July (Equateur Province), as well as all the previous ones since 1976. More than 400 local volunteers in Equateur Province received specialized training to respond to Ebola and support communities impacted by the disease. Their experience will be crucial in the fight against this outbreak—the tenth to strike DRC.

Ebola is a severe and often fatal illness. It can cause fever, diarrhea and bleeding inside and outside the body. As the virus spreads, it affects organs and the immune system.

The viral strain affecting DR Congo—Ebola-Zaire—has the highest case fatality rate of any strain of Ebola. But there is hope: Ebola-Zaire is the same strain that affected Equateur Province, which health experts believe was successfully contained with the current vaccine used in North Kivu.

How is the Red Cross helping?

Red Cross staff and volunteers work with communities to ensure residents are informed of the risks from Ebola, conduct safe and dignified burials, and help to improve water and sanitation systems. The teams are also supporting hospitals and health facilities with infection prevention and control measures.

Misinformation about how the virus spreads remains a challenge. Sharing information with at-risk communities and listening to people remains the most crucial way to tackle rumors and encourage safe behavior. More than 360 Red Cross volunteers—who come from the Ebola-affected communities—are active in fighting against misinformation. The volunteers regularly visit homes and communities in Ebola-affected areas to gather residents’ concerns, misconceptions and questions about the disease. The volunteers use this system to address fears, correct misinformation, answer questions, encourage people to protect themselves and their families against the Ebola virus, and urge residents to rapidly alert health authorities if there is a suspected Ebola infection. More than 716,000 people have been reached by the Red Cross teams through these risk communication and community engagement activities.

The Red Cross’s response also includes protecting people in prisons from Ebola. Teams are working in prisons in the affected areas to improve infection prevention control measures, including hand-washing stations, improved water and sanitation infrastructure and providing digital thermometers so that people can be monitored for Ebola-like symptoms and isolated quickly if needed. The International Committee of the Red Cross is also providing food to detainees as supply chains managed by the prison administration might be disrupted during the current outbreak.

For its part, the American Red Cross has contributed $250,000 to support the DR Congo Red Cross as it responds to the immediate needs of people impacted by the latest outbreaks of Ebola. The American Red Cross deployed a disaster response specialist following a different outbreak that began in May in DR Congo.

This isn’t the first time Red Cross and Red Crescent teams have worked together to fight the virus. The world suffered its deadliest Ebola outbreak from 2014-2016. The nations of Guinea, Liberia and Sierra Leone were hit hard by the crisis, which claimed more than 10,000 lives. The global Red Cross network deployed nearly 400 international staff to the region, trained more than 6,000 volunteers, and opened two Ebola treatment centers in Sierra Leone. The American Red Cross joined the response by deploying disaster specialists to the outbreak zone and providing financial & technical support. More information about the West Africa Ebola outbreak can be found here: https://www.redcross.org/content/dam/redcross/atg/NHQ_PDFs/EbolaOutbreakOneYearUpdate.pdf

Safely burying people whose lives were claimed by Ebola is critical to controlling and containing the outbreak. The body of a person who died of Ebola is highly infectious and, if not properly handled during burial, can contaminate those involved.

There is risk that Ebola could spread to other large cities and into neighbouring countries—Burundi, Rwanda, South Sudan or Uganda—especially as violence and insecurity push people to move and makes it more complicated to trace and isolate cases and hinders the response efforts in certain areas.

Cross-border activities are key to containing this outbreak. The Red Cross is supporting localized efforts to keep the outbreak from spreading to Burundi, Rwanda, South Sudan and Uganda. This includes supporting local Red Cross societies to mobilize and train volunteers, procure equipment and put in place preparedness measures should the outbreak spread to these countries. 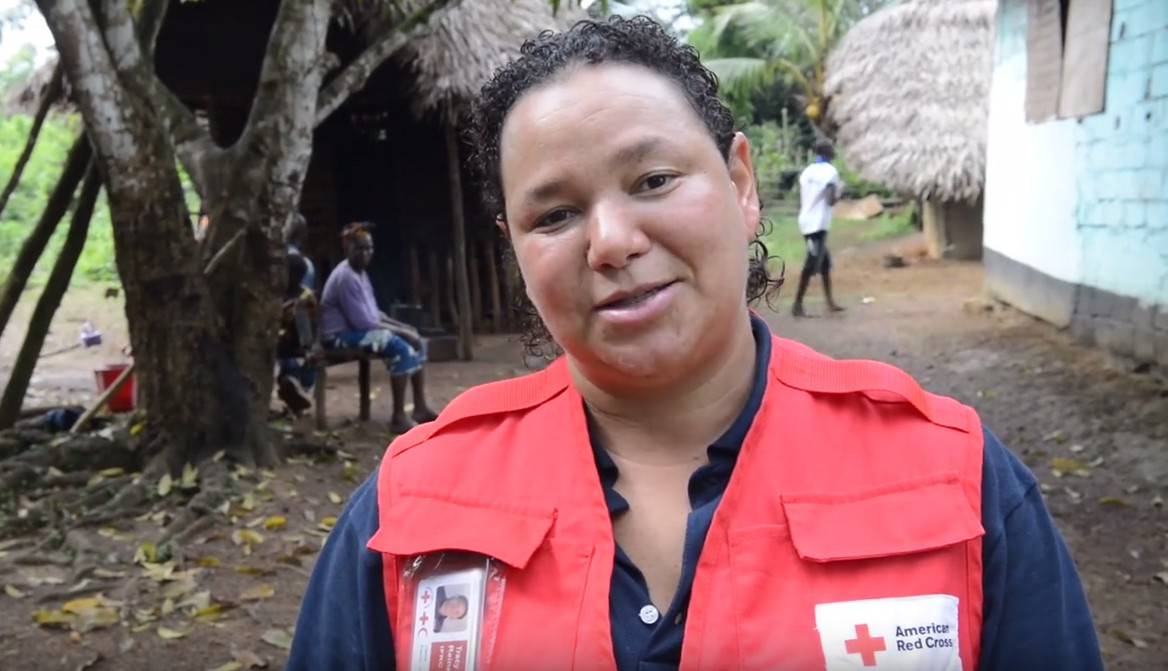