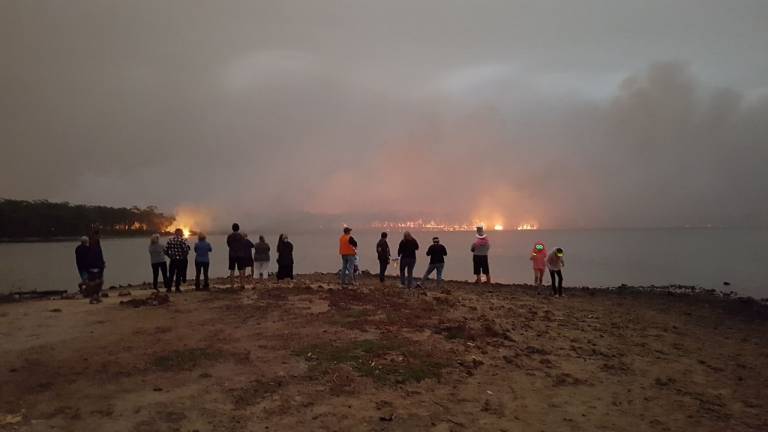 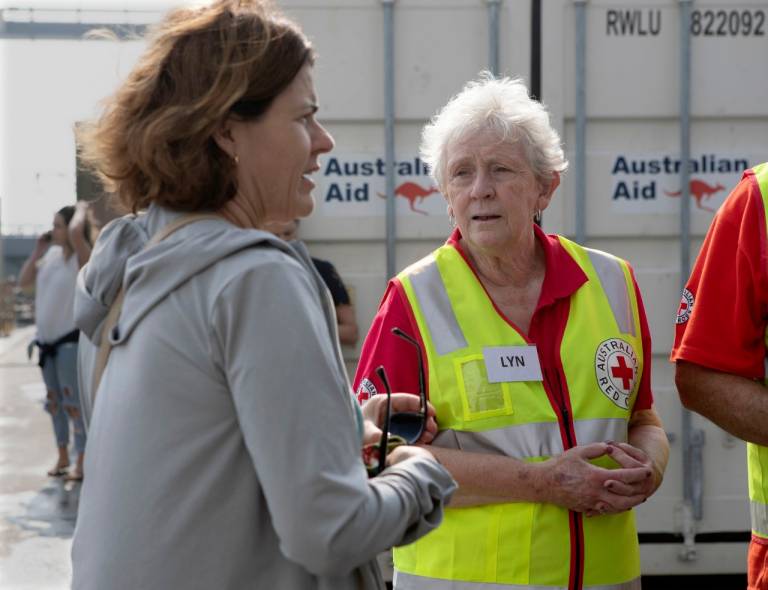 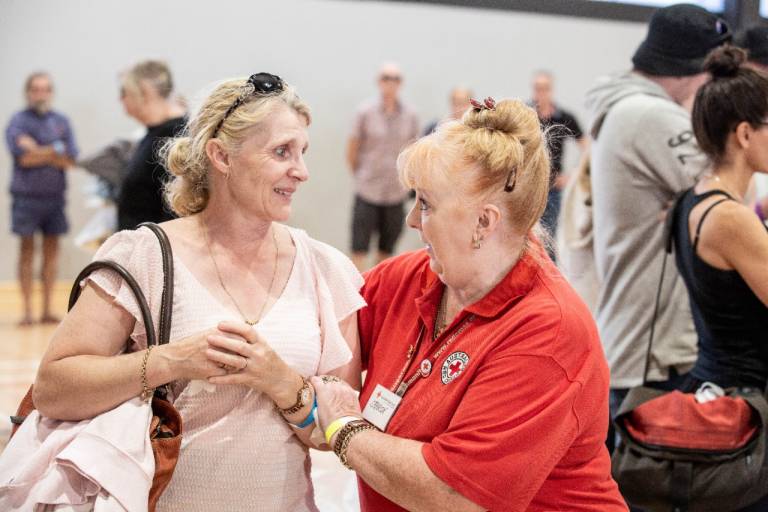 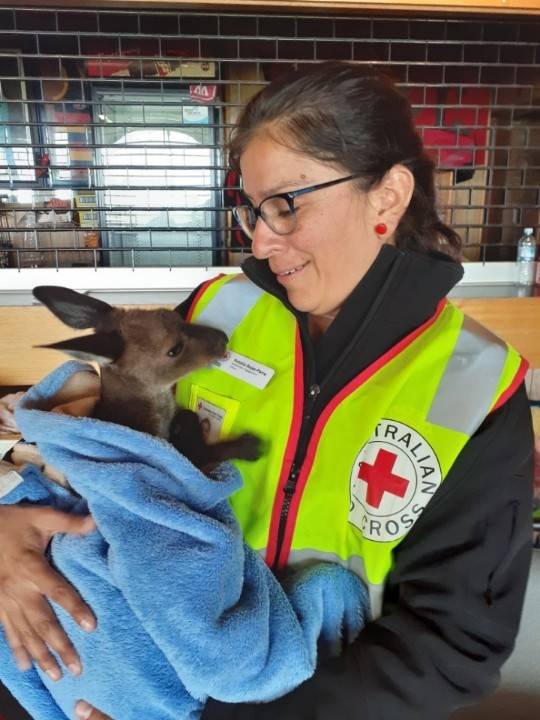 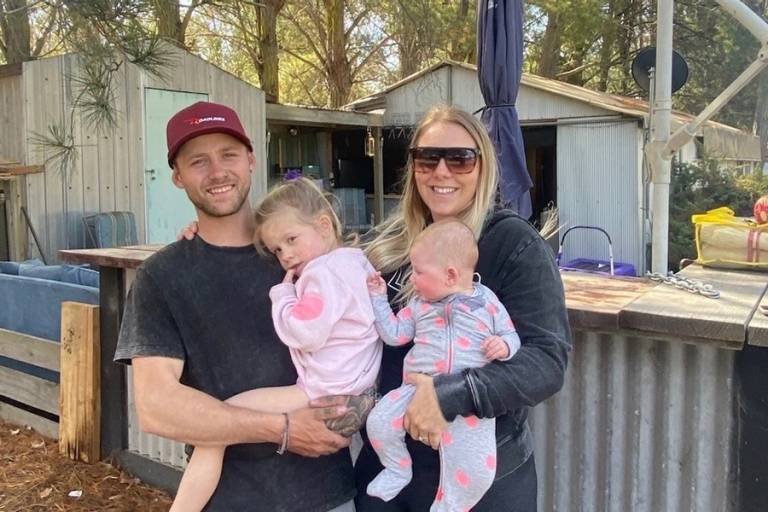 Chelsea and her family fled the bushfires and received help from the Red Cross. Photo by Australian Red Cross.

“There was ash everywhere. Burnt leaves, and then all of a sudden the sky went really, really red, and then it just went pitch black. Eight o’clock in the morning. Pitch black,” remembers Chelsea—who was on vacation in Victoria, Australia with her family when bushfires approached their residence.

Sheltering in the vacation property’s office, Chelsea was terrified. “I honestly didn’t think that we were going to survive…I just couldn’t stop crying. I just held my six-month-old baby girl and I just thought, this is how it will all end. It was just so terrifying.”

Several stressful hours later, Chelsea and her family made their way to a local relief center. Australian Red Cross volunteers helped them fill out their evacuation forms, provided them with food and water and brought special formula for Chelsea’s six-month-old daughter, Maggie.

“I can’t believe they got the formula in, when my Mum gave me that I was just in tears. That was the biggest thing, because I thought, what am I going to do with her? I’m going to have to give her something that might upset her. It was just incredible,” says Chelsea.

The Red Cross organized emergency accommodations once the family had been airlifted to safety. “We didn’t expect that. When we saw that they had assigned us our own apartment I just melted…we were going to be grateful for anything, but the fact that they knew we were a young family and put us as a priority…I was just so emotional. I got in the shower that night and just cried.”

Chelsea and her family are safe now, back at home and processing the terrible events they endured, but grateful for the help they received.

Australia’s bushfires—which have been burning since September 2019 in various parts of the country—are destroying homes and devastating residents who have lost family members. One billion animals are estimated to have been killed by the wildfires thus far.

Australian Red Cross volunteers are distributing aid and providing comfort to those in need. In addition to helping communities cut off by the fires, the emergency teams have welcomed families in evacuation and recovery centers across New South Wales, Victoria, Western Australia and South Australia.

Lisa Carr, a Red Cross volunteer helping evacuees, was struck by the compassion people showed to each other. “It’s the usual, ‘I’m OK; that person’s worse off than me.’ The humanity is always evident, it just rises to the surface in these really difficult situations,” says Carr.

The Red Cross is delivering basics such as food, water, and hygiene items in addition to arranging emergency accommodation in some areas. Families who have lost their homes in the bushfires are now able to apply for a cash grant from the Australian Red Cross, which can help them with their next steps and boost the local economy.

Emotions are running high for people who have lost touch with loves ones as a result of the wildfires. The Australian Red Cross is providing peace of mind by registering people as “safe” and taking inquiries about family members who may be missing. Some neighborhoods isolated by the wildfires have received satellite phones from the Red Cross—so they can communicate their needs to emergency responders and get in touch with loved ones.

Despite the heartache, humanity is shining through. Cheryl Colautti remembers, “There was one couple who came in covered in soot and I said, ‘Have you been fighting fires?’ and he said, ‘That’s an understatement. We lost our house and everything.’ I said ‘I’m so sorry.’” Cheryl feels she is making a difference simply by listening to people about their circumstances.

Peta Gapper, another Red Cross volunteer, puts it this way: “It’s just a matter of being there, talking to them, learning a little bit about them. I had a young girl that was crying who said she was terrified. I said. ‘Don’t be. We’re all here together and we’re all here looking after each other.’ She came up to me at the end of the shift and said thank you.”

The American Red Cross honors donor intent. Donors can now designate their donation to relief efforts for the Australia Bushfires by indicating this in the memo line of a check or in the mail-in donation form.

Amid a Flurry of Global Disasters, Red Cross Helping Around the World
.type=article.p=1.t=redcross%3ALine-of-Service%7CInternational.t=redcross%3AEmergency-Type%7CWildfire.f=service%3Ainternational-services
View All
Donate Now