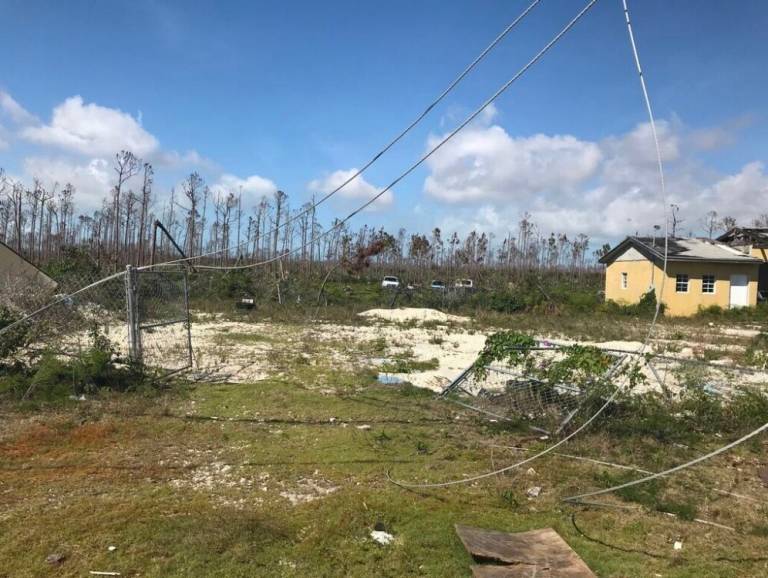 Six months after Hurricane Dorian, homes across Grand Bahama still have much work to be done as the island slowly recovers from the storm. Power is still out in places along the island and the water is not yet drinkable. Cars that were thrashed in the storm and other debris is are strewn about in some areas. 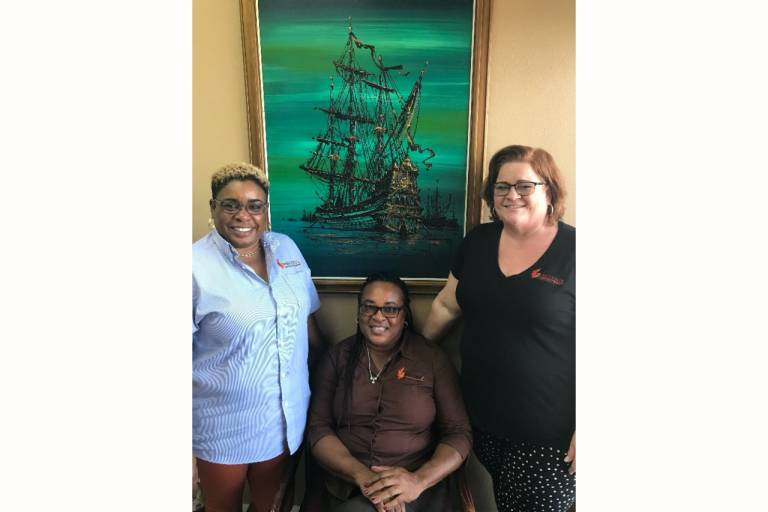 Just six months ago, the most destructive storm in the history of the Bahamas tore through the islands and cut deep into the lives of the people living there. Hurricane Dorian stole more than physical things like homes, cars, buildings and boats—but permanently altered the path many would take to getting back to a “new normal.”

“No one expected this type of water,” Grand Bahama resident Stephanie Ferguson said of the destruction to her small business caused by the storm in early September 2019. The hurricane crawled at a painstakingly slow pace across the islands, where her shipping and brokerage business had an office on Grand Bahama. She says it felt like they had finally gotten back to a good place after Hurricane Matthew in 2016 just to be starting over again following Dorian.

The storm left the island without safe drinking water, many homes and businesses like Stephanie’s destroyed, and thousands of people left wondering what they would do now. In the days that followed, the American Red Cross worked alongside the Bahamas Red Cross to help thousands of people with everything from food and water to emergency shelter materials and hygiene kits to cash.

Since the storm, the American Red Cross has helped to put nearly $14 million directly into the hands of 3,000 families and helped more than 200 families pay rent on apartments because their own homes had become unlivable. More than 10,000 families also received additional essential items following the storm including kitchen sets, tools, tarps, hygiene items, food, water and more. It was that initial bridge in the days following the storm that propelled people to keep going down the path of recovery.

For some, a once bleak outlook turned bright again through financial assistance provided on the islands. For Arlene Cornish of Abaco, having cash in hand from the Red Cross was the difference between wondering what to do next and being able to bring happiness and cheer to her eight grandchildren.

“I was so excited when I got the call from the Red Cross, I couldn’t sleep. I was thinking, what is going to happen tomorrow?” Arlene said. “I will never forget you.”

It’s more than just something tangible. The Red Cross is an ear to listen and a shoulder to lean on for today and right now, but also tomorrow and the road ahead. By partnering with other groups on the ground, the help spreads even further.

Stephanie Ferguson was one of the first to receive a business grant through Mercy Corps and funded by the Red Cross—to help her shipping and brokerage business, which she co-owns with two other women.

The money went toward a fresh start: a new office space, computers, wiring and the many things it takes to get a business going again after the storm brought everything to a standstill. The women will also receive mentorship and training to bring their business back from the storm even stronger than before.

Six months later, getting back to work brings a sense of normalcy to the people so devastated by Hurricane Dorian. Stephanie says the help has her “filled with relief.”

The steps toward recovery after such a severe storm can be difficult. The generosity of the American people has made it possible for the Red Cross to provide help and hope to those whose lives were disrupted so much by the storm.

To support the Bahamas Red Cross, the American Red Cross deployed more than 40 disaster responders to the Bahamas immediately following Hurricane Dorian to assist in the disaster and the recovery of the storm. Red Cross workers remain on the island today, helping people get back to a new normal including clearing the debris still left behind and helping make sure clean drinking water is available. By partnering with other groups on the ground, the Red Cross was able to support the distribution of more than 500,000 fresh, hot meals to people on the ground through World Central Kitchen and distribution of tens of thousands of gallons of fresh drinking water through Mercy Corps. Nearly 13,830 cubic meters of debris has already been removed through the CORE (Community Organized Relief Effort) program supporting homes hit hardest on the islands.

With all the progress that has been made, there is still a long road ahead for people impacted by Dorian. The American Red Cross, Bahamas Red Cross and the International Federation of the Red Cross (IFRC) are working together in the Bahamas to provide support for the complex needs created by the storm. Thanks to generous donors, the American Red Cross is still in the Bahamas, and can continue to help communities recover.

For more information about the American Red Cross’s work in the Bahamas, visit: redcross.org/dorian.