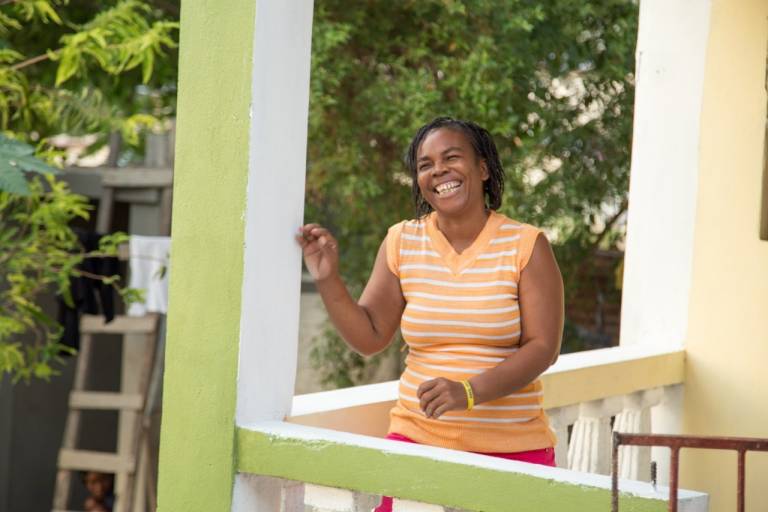 Loremise stands in front of her home—which was repaired and expanded with funds from the American Red Cross. “With this new home, my whole life has been transformed. I would not be able to rebuild this beautiful house without the support and assistance of the American Red Cross,” exclaims Loremise. Photo: American Red
Cross 2015 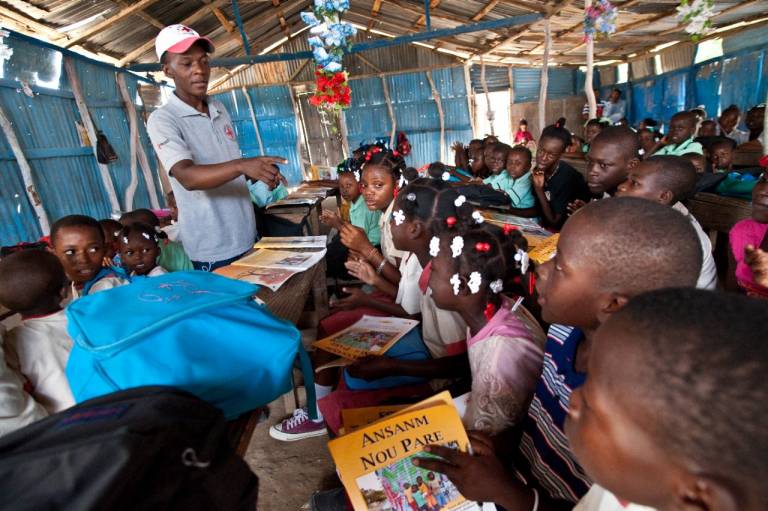 Mirlande Ostana, a Red Cross instructor, taught students in Haiti how to prepare for disasters like hurricanes and floods in the months and years following the earthquake. Photo: Daniel Cima/American Red Cross 2011 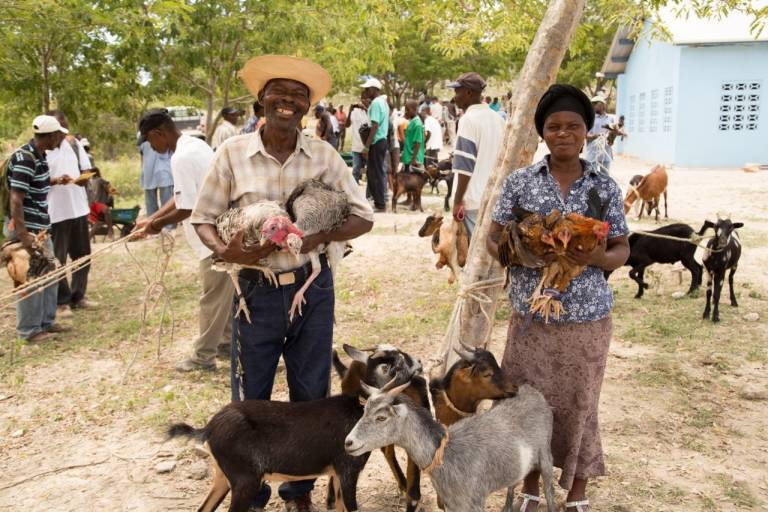 “If I have goats, turkeys, and chickens, and I take care of them so they reproduce, that could help me during the hard times my family experiences,” said Monistile Celeste. He and his wife stand with livestock given to them by the American Red Cross to encourage economic activity in rural communities. Photo: Garry Calixte/American Red Cross 2017 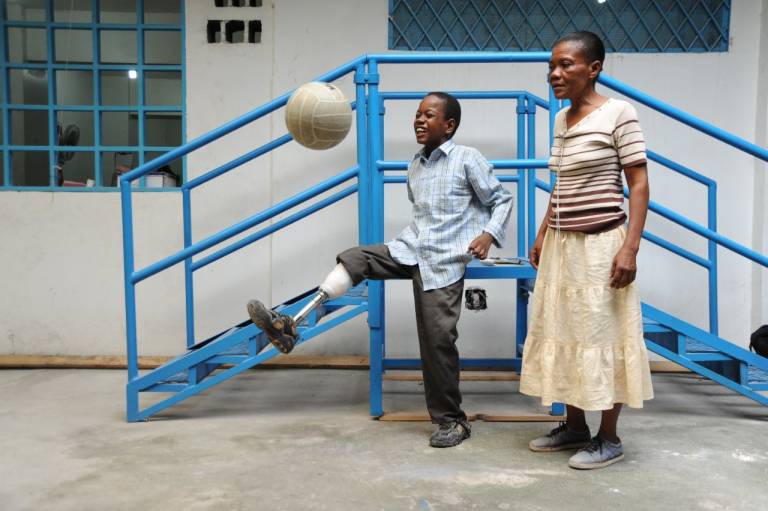 Jordanie lost his right leg during the earthquake, but never lost faith he would
walk again. Thanks to funding from the Red Cross, he received a prosthetic leg and physical therapy to recover. “I can kick a soccer ball again, and walk,” he explained, “it’s a wonderful thing.” Photo: Daniel Cima/American Red Cross 2010 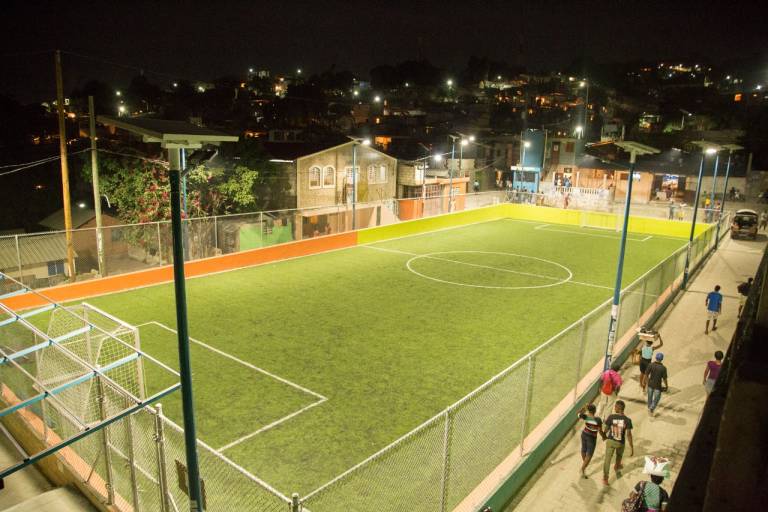 Residents impacted by the earthquake asked the Red Cross to focus on public spaces, so in addition to repairing houses, walkways, and schools, the Red Cross constructed parks and sports fields—like this soccer pitch in Campeche, Port-au-Prince. Photo: Garry Calixte/American Red Cross 2017 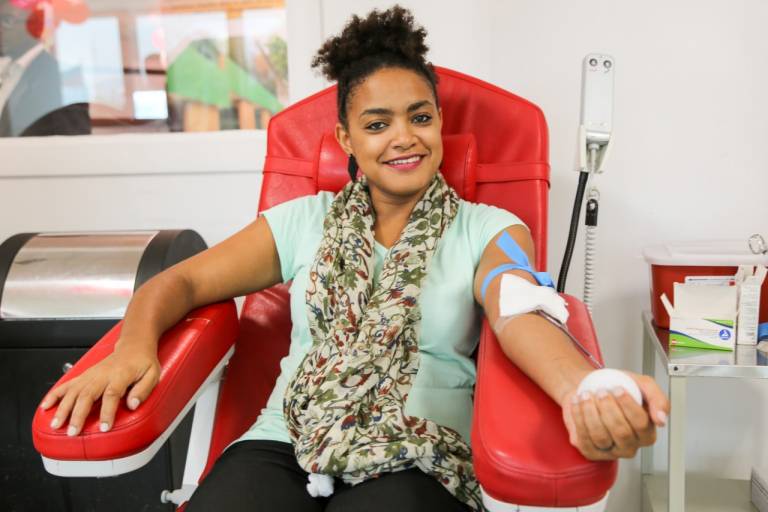 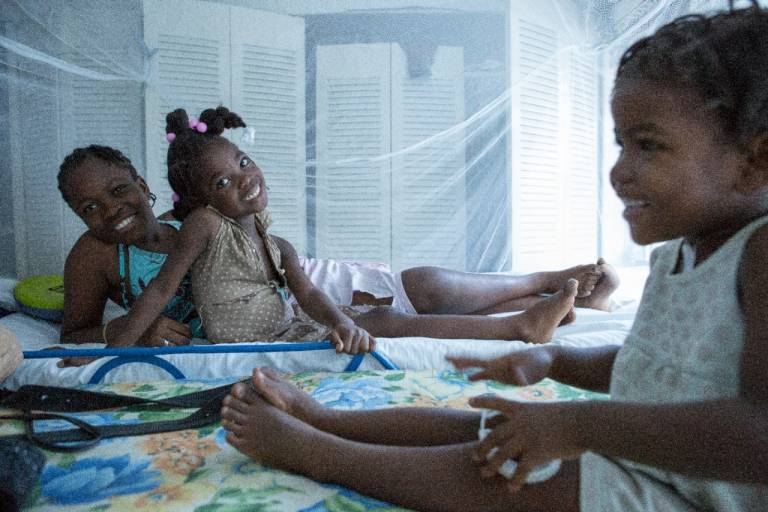 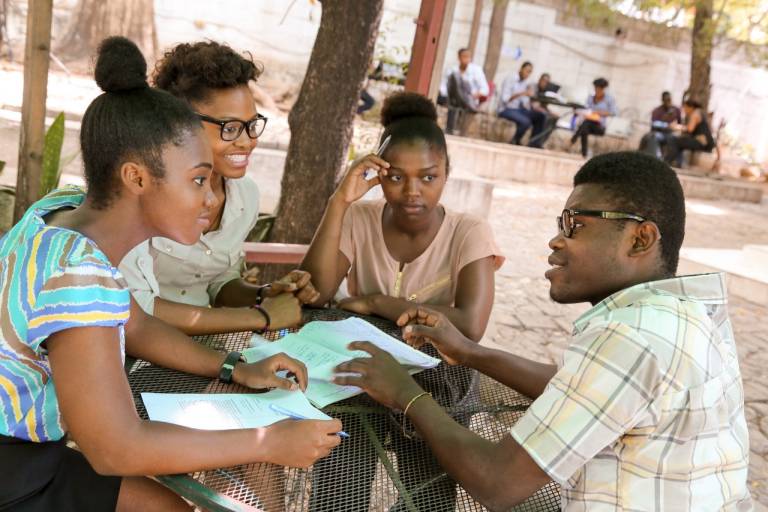 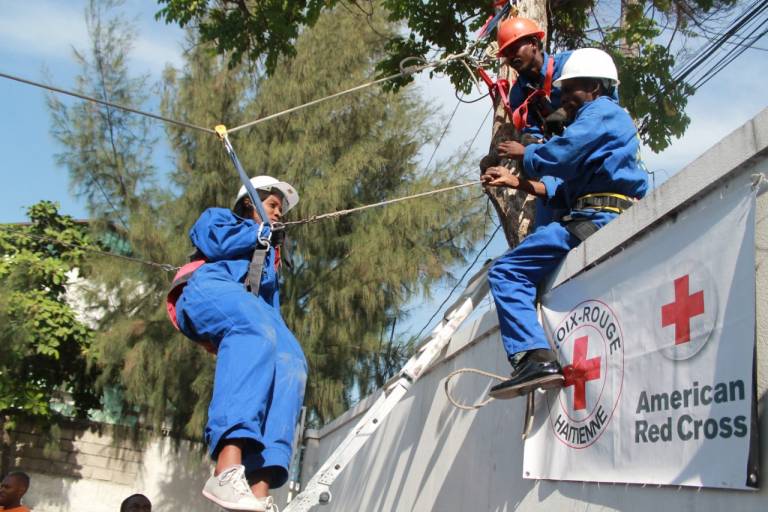 Members of local emergency intervention teams train on search and rescue techniques, so they can help their neighbors next time a disaster strikes. The American Red Cross has funded training and tools so the residents can be first responders during future emergencies. Photo by Garry Calixte/American Red Cross 2013 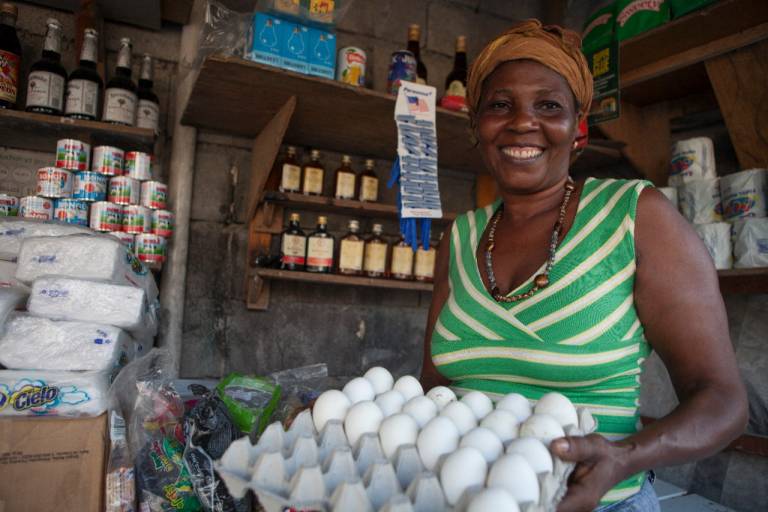 Mona Delva received a rental subsidy and cash grant from the Red Cross, allowing her to relocate from a congested camp and restart her business. “I celebrated like it was a party when I found out the Red Cross was going to help me,” Delva said. Photo: Talia Frenkel/American Red Cross 2012 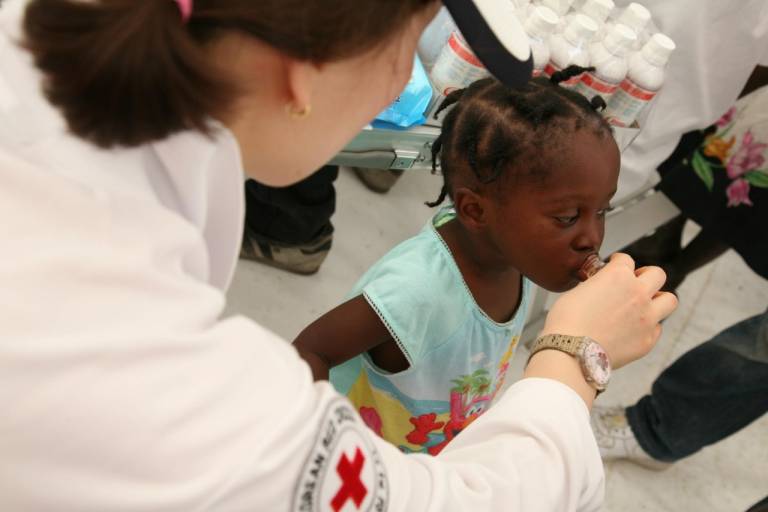 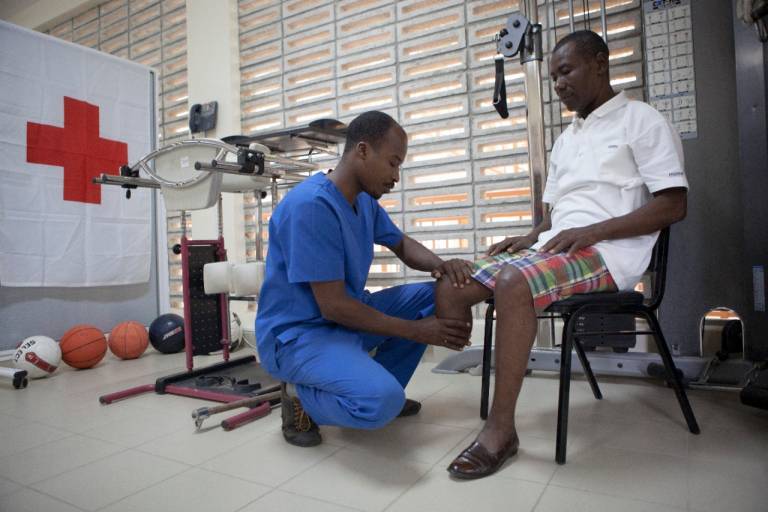 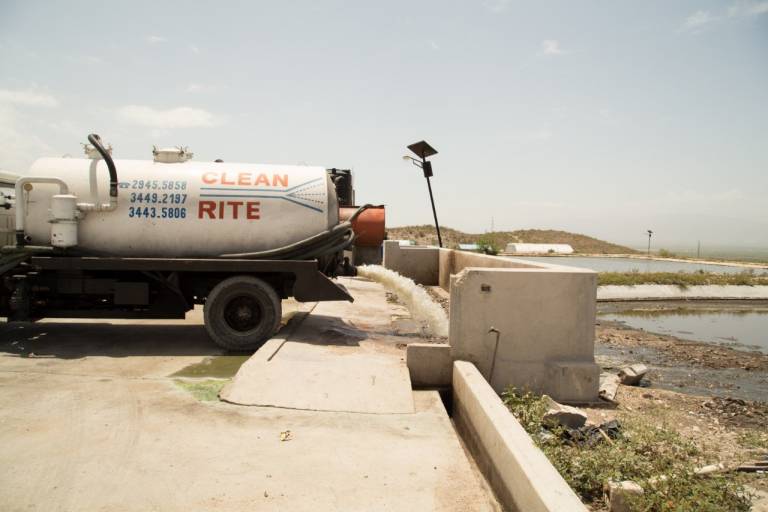 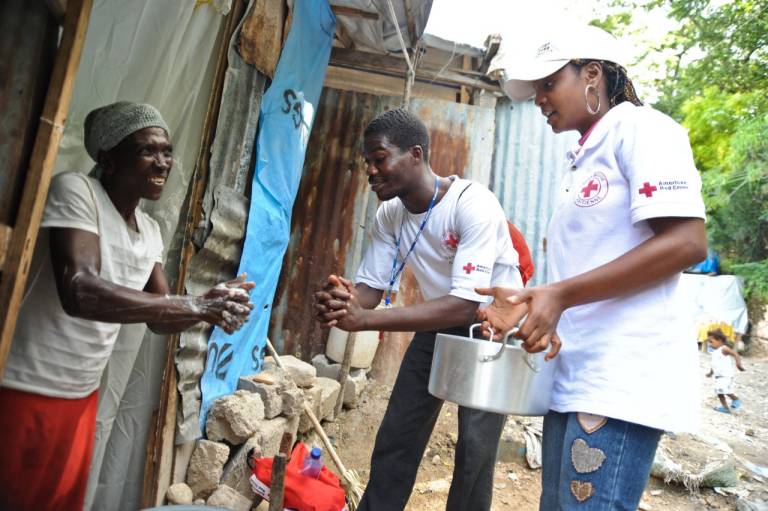 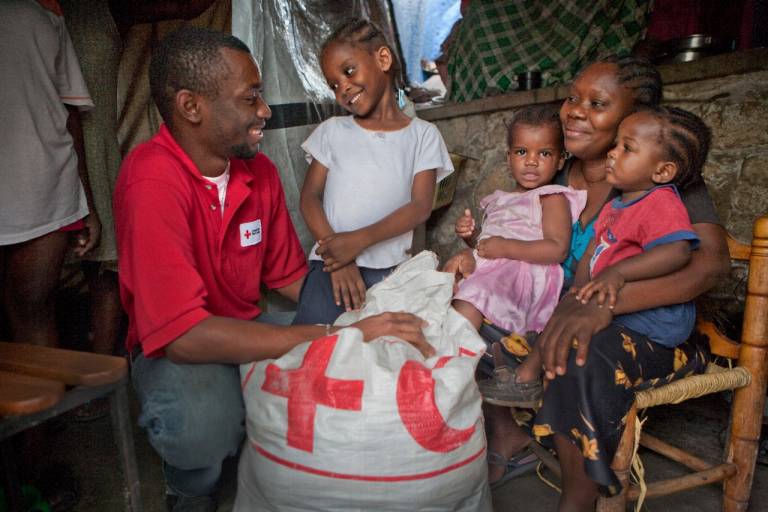 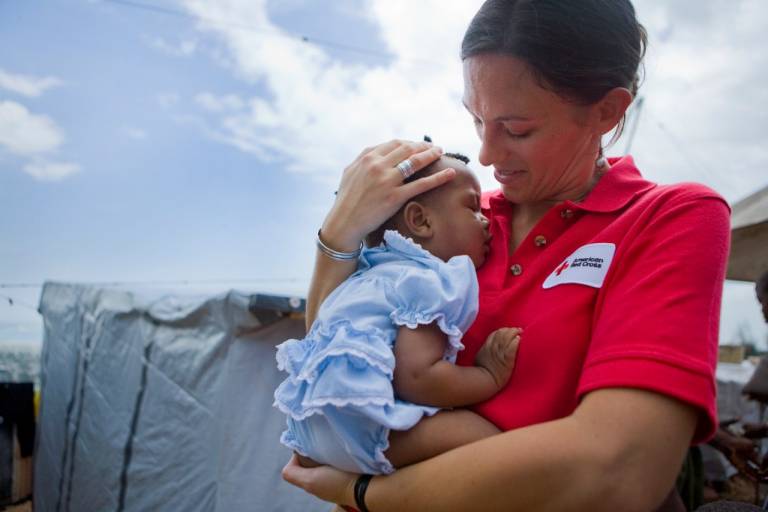 When a devastating earthquake struck Haiti on January 12, 2010, neighborhoods were destroyed, rubble lined the streets, families were separated and hundreds of thousands of lives were lost.

Within moments, Haitian Red Cross teams responded to the devastation even as their own families suffered losses. That day, the American Red Cross joined the global effort to aid the wounded and displaced.

Americans opened their hearts and gave generously to save lives and help people recover—and that’s exactly what their donations have achieved over the past ten years.

In the earthquake’s aftermath, the American Red Cross provided food, water, medical care, emergency shelter, cash grants and other essentials to millions of people—spending $148.5 million in the first six months alone. And when a severe cholera outbreak occurred, the Red Cross distributed relief and provided 70 percent of the funds needed for the country’s first cholera vaccination campaign. The US Centers for Disease Control (CDC) subsequently called the effort, “one of the best coordinated and documented responses to a cholera outbreak in modern public health.”

Looking back, it’s easy to forget the significance of immediate aid such as this, but people whose lives were touched by the aid will always remember.

Since then, Americans’ donations have funded the operations, construction or equipping of more than 50 hospitals and clinics. The generosity of the American public helped to renovate or reconstruct 48 schools and assisted more than 164,800 people through housing and neighborhood recovery.

Other parts of the American Red Cross work are less visible—but just as critical. Donations enabled us to grant seed money to local Haitian entrepreneurs; train disaster responders for future emergencies; address gender-based violence; pay for university education for talented students; strengthen the Haitian Red Cross and so much more. Work has focused on providing essential services to the most vulnerable—especially children, the elderly, people with disabilities and those not served through other programs.

Disaster relief and recovery is a true team effort. The American Red Cross ensured that the majority of our staff was Haitian; funded more than 50 organizations large and small; and made certain that all projects were driven by community members themselves—all in service of the Haitian government’s national earthquake reconstruction plan and in partnership with the Haitian Red Cross.

No single organization can address every need in Haiti, but our American Red Cross donors can be proud that their generosity helped Haitians on their long road to earthquake recovery.

"I want my children to be healthy. This gives me peace of mind," says Leonel, one of many parents whose kids received free measles, rubella and polio vaccinations in Haiti. Leonel and his wife, Loramise, are eager to keep their twins—who survived a complicated birth—healthy. So when Red Cross volunteers came to their door and explained the health risks associated with vaccine-preventable diseases, they knew immunizing them was the right thing to do.

American Red Cross’s participation in Haiti’s vaccination campaigns is part of a larger investment in the country’s health infrastructure. Thanks to generous donations in the earthquake’s aftermath, the American Red Cross has supported more than 50 medical facilities in Haiti. Funding has ranged from a few thousand dollars for medical equipment to millions for large-scale construction work on new facilities. This includes $5.5 million towards Mirebalais University Hospital, a state-of-the-art teaching hospital run by Partners In Health.

“Every time I got pregnant, I would lose the child,” remembers Caroline, a patient at Mirebalais who received urgent surgery to remove a tumor. “The doctor has given me a chance of having children.”

From reconstructing the Haitian Red Cross blood bank and fighting epidemics to funding the construction of the country’s first wastewater treatment plant, Americans’ donations for the Haiti earthquake made positive changes in people’s access to essentials like clean water and healthcare.

‘Home’ is More than Four Walls and a Roof

The earthquake dealt an immense blow to Haiti’s infrastructure, and an estimated one quarter of the capital city’s population was displaced. The global Red Cross network moved fast: providing emergency shelter to more than 860,000 people in the quake’s aftermath. Meeting this immediate need was a lifesaving act, but it’s not the end of the story.

Over the past ten years, the American Red Cross has provided more than 164,800 people with safe housing and neighborhood recovery support.

As earthquake recovery efforts moved forward, it was clear that building brand new homes for every family wasn’t a scalable solution or a responsible use of resources. Given the physical landscape, land tenure issues, and people’s desire to stay in their neighborhoods, the American Red Cross focused instead on offering realistic and durable shelter solutions to Haitians. Most Haitians were renters before the earthquake, so we funded rental subsidies to help Haitians leave camps and move into rentals. We repaired, strengthened, and expanded houses to create more secure rental stock; erected transitional and progressive shelters that could be easily expanded to create permanent structures once land tenure issues were resolved; and trained construction workers on safe building techniques.

Families in Haiti lost more than physical homes in the earthquake—they lost neighborhood assets including schools, clinics, roads, and critical infrastructure. Haitians told us that remaining in their neighborhoods to rebuild and improve their quality of life was the priority, so in addition to investments in housing, the American Red Cross repaired and reconstructed schools, built large water systems, and planted thousands of trees. By constructing bridges, roads, sidewalks, and public spaces like parks and sports fields, we helped neighbors connect to one another and restore a sense of cohesion.

"My lifelong dream is being achieved,” says Ferdinand, an earthquake survivor and entrepreneur. Ferdinand received seed money from the American Red Cross to buy essential equipment for his business: a coffee roaster, mill, refrigerator, grill, kitchen supplies and a laptop computer. Soon after receiving the $10,000 USD, he was able to train and hire fifteen people to work at his company, turning local produce into jams, creams and liqueurs.

Ferdinand is one of more than 400,000 Haitians who benefited from livelihoods assistance from the American Red Cross over the past ten years. Establishing new careers helped earthquake survivors regain a sense of dignity and financial independence.

The Red Cross utilized donations from the American public to address the economic impacts of the disaster. This includes cash grants to entrepreneurs like Ferdinand; technical training for welders, bakers, computer scientists and other professionals; scholarships for students’ university education; and savings and loan groups to help people achieve financial goals. Interventions like these are not always visible to the public, but they empower people to take charge of their careers.

How did the Red Cross spend Haiti earthquake donations?

Thanks to generous donations to the American Red Cross, more than 4.5 million Haitians have been helped since the earthquake.

The American Red Cross published this complete financial breakdown of the $490 million received for Haiti earthquake relief and recovery. This chart details all the projects undertaken by the American Red Cross’s Haiti Assistance Program, including grants to partner organizations. We believe this breakdown sets a new standard of transparency for the non-profit sector.

Disasters are heartbreaking, but they also bring out the best in people. Americans’ generosity during the earthquake was matched only by the resilience of those affected. Donations literally saved lives in the quake’s aftermath, provided immediate assistance for millions, and supported hundreds of thousands of people to move forward in a long recovery process with dignity and hope.

Recent civil unrest in Haiti has resulted in economic stagnation, insecurity, and shortages of social services and medical care. Families are struggling to survive as they move into an uncertain future. Large investments in Haiti after the earthquake have helped build resilience, yet families face challenges more complex than disaster recovery alone.In response to the civil unrest, the Haitian Red Cross is providing first aid and transporting injured people to medical facilities via ambulance. The American Red Cross has made financial contributions towards these efforts and continues working alongside the Haitian Red Cross to strengthen its capacity to respond to crises.

How Does the American Red Cross Help Asylum Seekers and Migrants?
.type=article.p=1.t=redcross%3AIncident%7CHaiti-Earthquake.t=redcross%3ALine-of-Service%7CInternational
View All
Donate Now