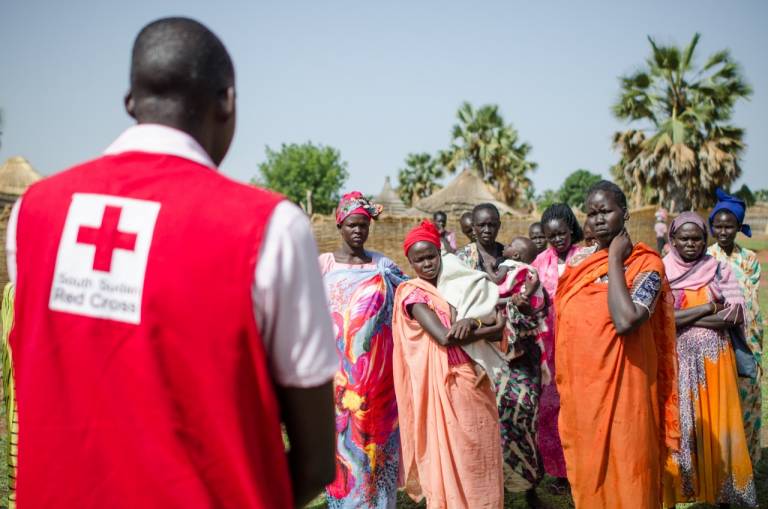 Garang, an Emergency Preparedness and Response Officer with the South Sudan Red Cross speaks with mothers in Panameth village, Aweil Centre. Chronic hunger continues to escalate and intensify in South Sudan. Less than half of the population is able to produce, collect, or purchase sufficient food to meet their basic needs. Photo courtesy of IFRC/Corrie Butler

American Red Crosser Carter Stone powers up equipment in Panama. Stone, who is currently deployed to support population movements, is setting up charging stations for migrants in transit. Photo courtesy of Carter Stone 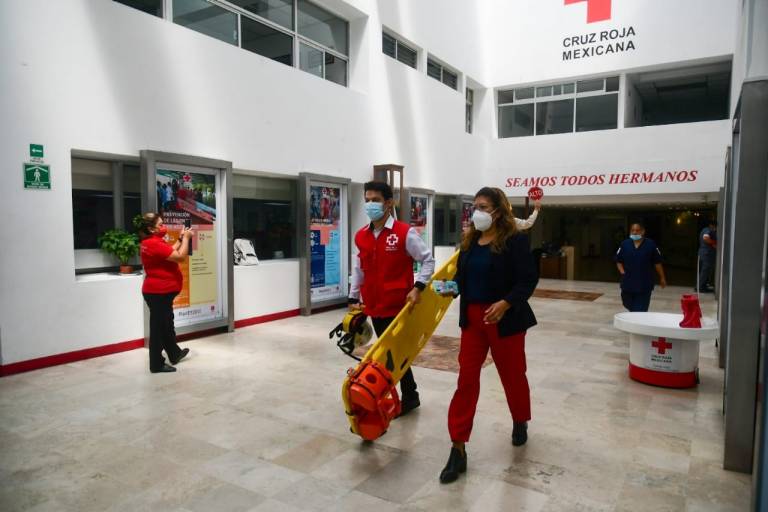 Over the past week, the global Red Cross network has responded to disasters around the world. National societies and team members from the International Federation of Red Cross and Red Crescent Societies (IFRC) are rolling up their sleeves to help those in need following earthquakes, a typhoon, a hurricane, population movement, mudslides and the ongoing hunger crisis in Africa. While the challenges of the moment are great, teams are committed to delivering urgent and life-saving assistance.

Hurricane Fiona
On September 21, Fiona, a category 3 hurricane, continued to barrel through the Atlantic Ocean headed towards Bermuda. International Red Cross teams are preparing and responding to the rapidly-developing situation in the Dominican Republic, Turks & Caicos Islands, the Bahamas and Bermuda.  On the ground, team members from the British Red Cross and the Bahamas Red Cross are helping to evacuate vulnerable populations. The Red Cross has opened shelters and is maintaining contact with local authorities as the storm’s impacts are still being assessed.
In Canada, where the storm pummeled the coast on September 24, Red Cross teams are carrying out relief, recovery and risk reduction activities.

Typhoon Noru in the Phillippines
People in northern Philippines are scrambling to safe areas and evacuation centers as Super Typhoon Noru (locally named Karding) begins to batter thousands of cities, homes and infrastructure. The typhoon, which had maximum wind speeds of 161 miles per hour, made landfall at the Polillio islands north-eastern Philippines late Sunday, September 25, local time. Philippine Red Cross teams and staff from the International Committee of Red Cross and Red Crescent Societies (IFRC) are on the ground, mobilized to assist and evacuate people to safety. Red Cross volunteers are standing by to move people to evacuation centers.

Costa Rica Landslides
On September 18, Heavy rain and downpours inundated Costa Rica over the weekend, triggering deadly mudslides.  A bus and two other vehicles crashed into landslide debris on the El Hundimiento mountain in Alajuela Province, leaving at least 9 people dead. The Costa Rica Red Cross said over 30 people were rescued with some injured and taken to a nearby hospital. Search teams with sniffer dogs have been working at the site looking for possible missing passengers. As the Cañas River overflowed impacting hundreds, relief centers were set up to house displaced families. Red Cross teams are working with local authorities to help with evacuations and rescue activities.

Migration in Central America
As migration surges in Central America, Red Cross teams are on the ground to provide life-saving care to those in need. The International Federation of the Red Cross (IFRC) estimates that  500,000 people on the move along migratory routes in Central America and Mexico might need humanitarian assistance in the next 12 months. Red Cross teams are working to provide health care, psychosocial support, access to water and sanitation services. The Red Cross is also working with origin, transit and host communities to address environmental-, climate-, and livelihood-related issues that may trigger population movements.

Mexico’s Earthquake
A magnitude 7.7 earthquake struck near La Placita de Morelos in western Mexico on September 19. The Mexican Red Cross relief teams continue monitoring the situation and gathering information in Guerrero, Oaxaca, Jalisco, Michoacán, Puebla, Colima, Hidalgo, Querétaro and Mexico City, the regions hit by the quake. Red Cross volunteers have reported damaged buildings and cracks in houses as well as a shaken population. The Mexican Red Cross Relief teams, in close coordination with state and local authorities, continue to assess damages caused by the earthquake in rural and urban areas. In Mexico City, 19 ambulances and 57 paramedics remain on call and are ready to support the affected population.

Typhoon Nanmadol in Japan
The Japanese Red Cross is responding to urgent needs in the wake of Typhoon Nanmadol. The super typhoon, which made landfall on September 18, killed at least four people and injured more than 100 others after making landfall on the southern Japanese island of Kyushu on September 18. More than 12,000 people took shelter at evacuation centers and more than140,000 homes were still without electricity as of September 20. The super typhoon, which is equivalent to a category 4 or 5 hurricane, brought gusts of up to 145mph, destroying homes and disrupting transport and businesses.

Hunger Crisis in Africa
The Red Cross is currently focused on providing life-saving humanitarian assistance in the wake of the hunger crisis in Africa. Red Cross teams are working to deliver cash to families to meet their food, health and other urgent needs. Red Cross teams hope to reach five million people, in 12 countries —Ethiopia, Kenya, Sudan, South Sudan, Somalia, Nigeria, Niger, Angola, Burkina Faso, Zimbabwe, DRC and Madagascar. The Red Cross is working to address the most basic needs including access to water, sanitation and hygiene services, and protect the livelihoods of those affected by the crisis.

TEST Your Smoke Alarms as You TURN Your Clocks Back this Weekend to Prevent Home Fire Tragedies
.type=article.p=1.t=redcross%3ALine-of-Service%7CInternational%7Cmigration.f=service%3Adisaster-relief-and-recovery.f=activity%3Ainternational-services.f=service%3Ainternational-services.t=redcross%3AEmergency-Type%7CTyphoon
View All
/content/redcross/en/about-us/news-and-events/news/2022/amid-global-disasters-red-cross-helping-around-the-world