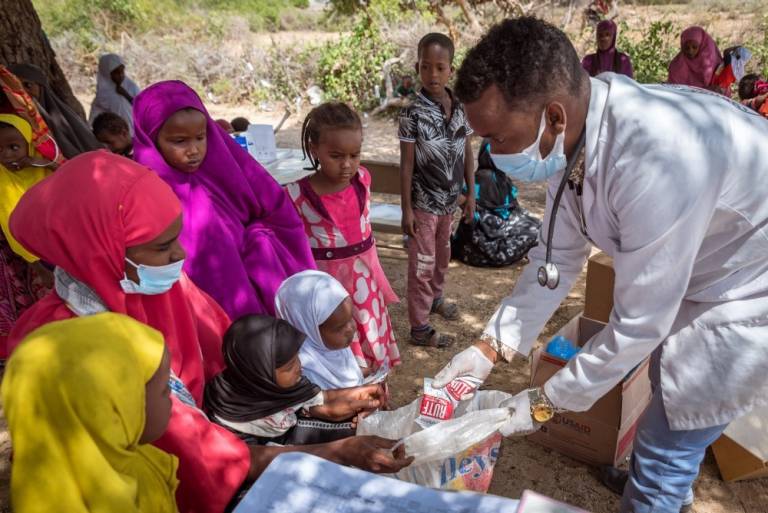 Suleekha Arab and her child receive food from a Red Crescent worker at a mobile clinic in Somallia. 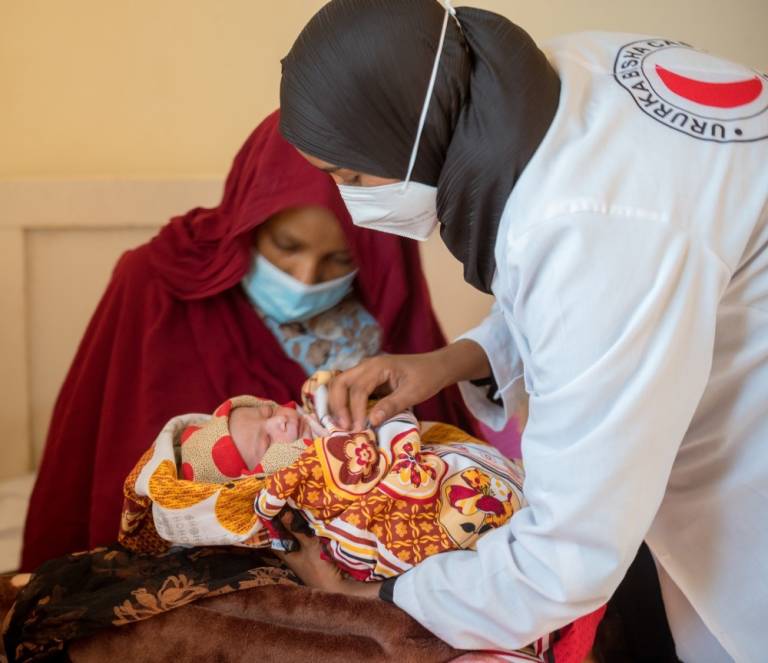 25-year-old Ifrah Eid Aaadan holds her newborn baby while she receives a vaccine at a clinic in Somalia to protect against disease as thousands face food insecurity. 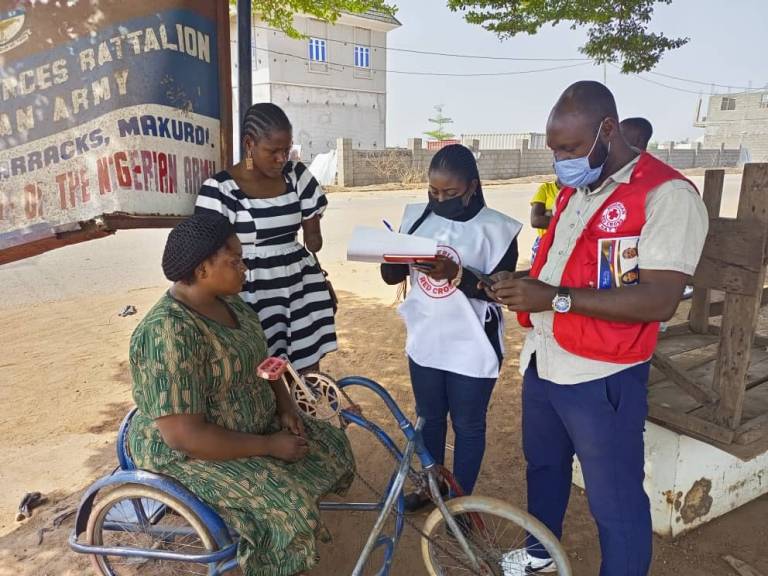 The Nigeria Red Cross helps get cash into the hands of people facing food insecurity. 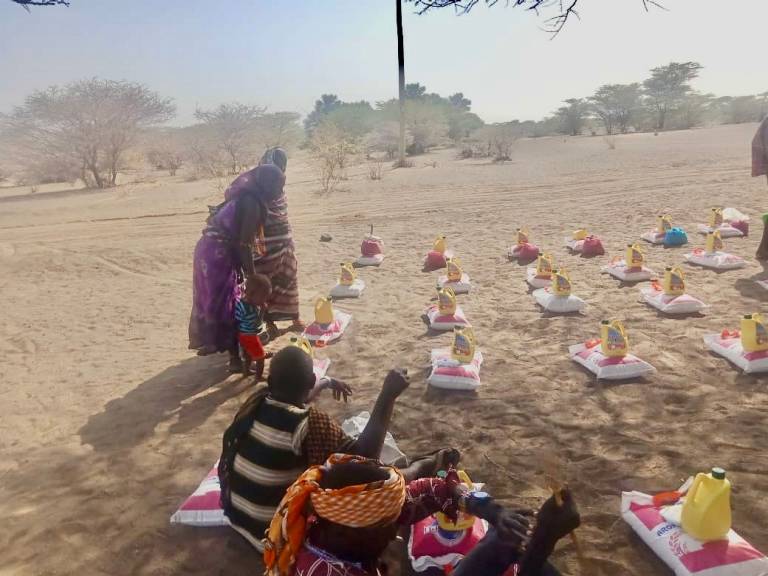 The Kenya Red Cross provides food, water and essential household items to families in the middle of severe drought. 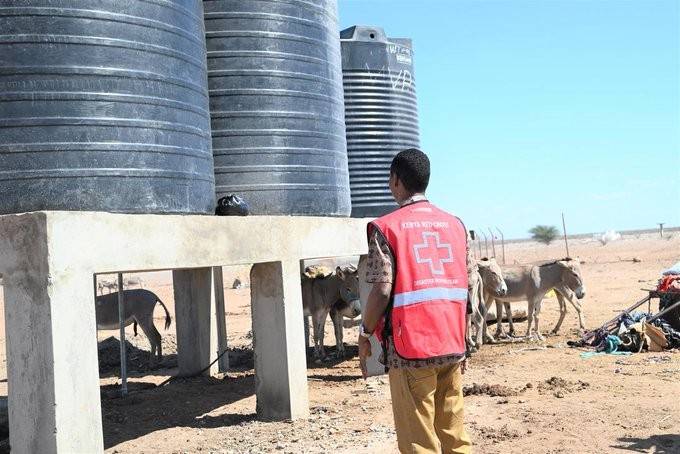 Widespread flooding across South Sudan has caused many to face hunger on top of homelessness. 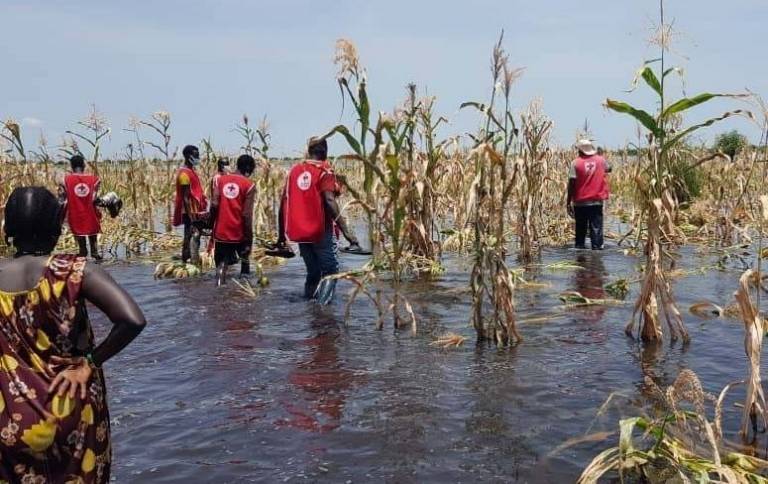 Crops have been wiped out across South Sudan where many make a living by farming. 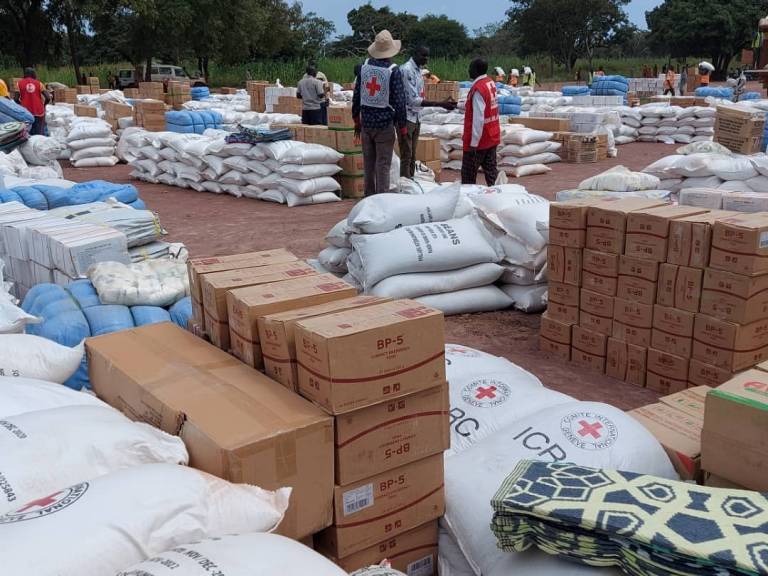 Food staples are provided to people affected by three years’ worth of constant flooding across South Sudan.

The American Red Cross has contributed more than $1 million in recent months to address food insecurity for families in Somalia, Nigeria, Kenya, and South Sudan.

Suleekha Arab, mother to a 10-month-old child, sits near a tree surrounded by other youngsters on a bright sunny day. She embodies a sentiment every parent in the world knows well – putting the needs of her child before her own. There at a clinic in the heart of Somalia, she reaches out to accept a food parcel from a Red Crescent worker that will provide critical nutrients for her little one who has just been diagnosed as malnourished. She is doing the best she can, and yet, her young family is one of five million across the country in this dangerous position of not having enough food -- through no fault of their own.

Severe droughts, insect invasions, ravishing floods and irregular rainfall have all contributed to a major crisis wreaking havoc across Africa: food insecurity. It’s a prolonged emergency that often doesn’t make headlines, yet consumes nearly every aspect of daily life for millions like Suleekha.

Many of these driving issues are caused by climate change. Traditional ways of farming that provide important food sources are not resilient against this constant flow of severe weather. Less food is produced as a result, which means less profit and fewer people able to access the food that is available.

In other words, hunger isn’t just about not having enough to eat. The crisis is crippling how people earn a living, their health and ability to ward off serious disease, practice basic sanitation and drink clean water.

The American Red Cross is deeply invested in doing its part to help.

Somalia’s Hard-to-Reach Corners
Nearly half of the people in Somalia are in Suleekha’s position of being food insecure. It’s been nine months since a national emergency was declared by the government and the need to help millions remains – all against the backdrop of life-threatening disease.

The Somali Red Crescent has unparalleled access to remote and hard-to-reach families, including those living on mountains or nomadic communities. Thanks to an entire network of health clinics across three regions – including mobile versions – Red Crescent workers are providing key health services to many that may have otherwise been left behind. It’s an important task, as more than 840,000 children under the age of five are among the most vulnerable to malnourishment.

The American Red Cross has contributed $380,000 to support the Somali Red Crescent as responders provide cash directly to those affected by the drought to purchase food and essential items for their families. The response continues to be a team effort, as unpredictable rains have damaged crops, food sources and hindered how people get clean water. Partners like the German Red Cross have stepped up to repair and rehabilitate water reservoirs which collect water during the wet season to use during the dry season.

Nigeria: Dignity for People Displaced
“Everyone is out of cash and the price of each product has increased now,” says Ali Kolomi who works as a grain trader. He is one of thousands of internally displaced people (IDPs) in Nigeria who have had no choice but to flee their homes in other parts of the country, and now live in a massive camp.

“Previously, the price of the product was acceptable. Since it has increased, we now have to buy it at an expensive rate. And since we sell it in the camp -- we know they are IDPs -- the price cannot be the same since we take their situation into consideration,” he says.

Droughts and floods have driven the cost of basic food items so high, that millions of people have had to reconsider what they buy, and when. On top of severe weather, clouds of locusts have invaded, stripping crops, food sources and incomes.

Across Nigeria, 2.5 million people are food insecure. The American Red Cross has contributed $200,000 to support the Nigeria Red Cross to get cash into the hands of people who need it.

Kenya: Young Mothers Seeking Nutrients for the Children
Nearly a quarter of Kenya is going hungry. Drought has struck once again – this time, it’s young children and new mothers who are bearing the brunt of the crisis. More than 630,000 children under the age of five are facing malnourishment and in need of lifesaving treatment.

The crisis, which affects more than 2.1 million people, was declared a national disaster by the Kenyan government in September 2021.

The Kenya Red Cross has its ear to the ground, listening to the urgent needs of families. One of those needs is clean drinking water – both for people and livestock. Volunteers have rehabilitated water systems and expanded storage tanks within communities that depend on them most. And the American Red Cross is right alongside them, supporting the work and contributing $355,000 to ensure basic needs, livelihoods and supplies are funneled to those at risk.

Many families have had to relocate to higher ground where they may be safe from the water, but not from other dangers. The floods have devastated schools, health facilities and wiped out agricultural staples -- a massive issue as many people in the country make their living as farmers. The elderly and people with disabilities are among the most vulnerable, leaving young girls and women to feed their families. It’s a daunting task to complete with minimal resources at hand.

To support the South Sudan Red Cross’s efforts in providing cash to people who have lost their homes and income, the American Red Cross has contributed $225,000.