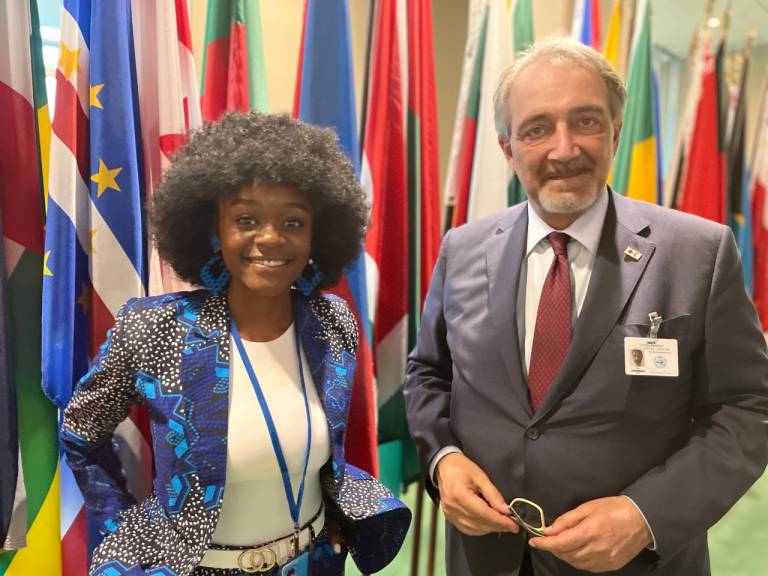 IFRC President Francesco Rocca and American Red Crosser Diane Bahati pose for a photo at the United Nations. Bahati shared her experience as a migrant fleeing the war-torn Democratic Republic of Congo as a small child. 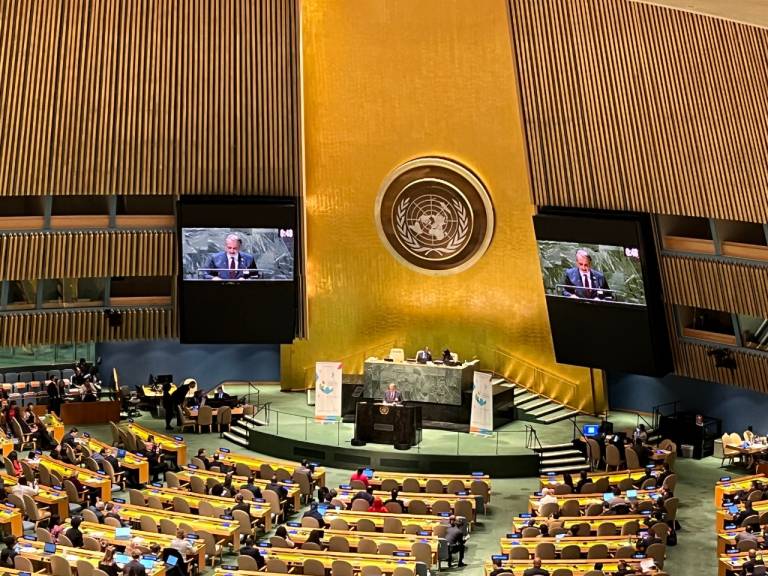 At the United Nations general assembly, Francesco Rocca of IFRC said that people their homes and embark of long, dangerous journeys because of conflict, violence and disasters. "We need to make migration a choice not a necessity,” he said.

Officials from the American Red Cross and the International Federation of Red Cross and Red Crescent Societies (IFRC) recently visited the United Nations in New York to address the complex challenges of migration and its impact on global humanitarian work. Their visit was part of the first International Migration Review Forum (IMRF), which aims to consolidate collaborative action on migration at the local, regional and global level.

Francesco Rocca, president of the IFRC, Tiziana Bonzon, manager of climate, migration and resilience for IFRC and Jenelle Eli, senior director of media relations for the American Red Cross, discussed how the Red Cross is working in support of the global compact on migration.

“This is the first time we are coming together to assess our collective progress,” Rocca said. “People leave their homes and embark on long and dangerous journeys because of conflict, violence and disasters. We need to make migration a choice, not a necessity,” he said.

Eli shared her recent experiences as part of a crisis response team aboard a rescue ship in the Mediterranean Sea. During this deployment, she and her colleagues rescued more than 300 migrants, including women and unaccompanied children from the most dangerous migration journey in the world — from North Africa to Europe.

“We saw a potential mass casualty situation unfolding every day we were in the search and rescue zone,” Eli said.

She shared that while onboard it struck her that so many minors made this journey alone. Of the more than 50 unaccompanied minors rescued, a 10-year-old-boy from Nigeria who had been separated from his brother stood out to her. She described the chaos that can often happen during migration.

Eli described the often brutal challenges migrants face in stark terms, noting that it is one thing to hear about torture in Libya, but it is another thing to see the evidence. “I was shocked at how many people wanted to show me their wounds. I think many just wanted their story to be told and to show that this is happening around the world,” she said.

Another migrant Eli met on her mission at sea included a 20-year-old car mechanic from Syria traveling with his mother and sister. “He described being haunted until he could figure out a way to get his father and brother who were still in Syria to safety,” she said. Read more of his story here: For Family Rescued at Sea: New Year, New Hope.

“Many people told me that they are the lucky ones. These migration journeys all over the world are so incredibly difficult…with starvation, dehydration, sexual assault and violence. It’s important to bring these stories to the United Nations. One of the priorities of the IMRF is to save lives and we can’t do it alone,” Eli remarked.

Diane Bahati, whose family fled the Democratic Republic of Congo and now resides in the U.S., shared her experience as a refugee. She described the compounding crisis of suffering including a volcanic eruption and conflict from civil war. She was a small child when her parents gathered their family of 10 and fled to Uganda to seek asylum. Although she was young, Bahati recounts the family trauma from such a difficult experience.

“We ended up at a refugee camp that my father described as a 'boundless desert,' where we experienced starvation and lack of water due to the shortage of supplies. This became our new home for the next two and a half years,” she said.

She says that while in the camp, her family received first aid kits and hygiene products and in big red letters, they saw the words: ’American Red Cross.’ “Little did I know that 16 years later I would become a board member of the Red Cross. Humanitarians helped my family and I'm here to give that help back,” she shared.

Today, Bahati is a sophomore at the University of Utah. She plans to go to law school and become “an agent of change for peace in the world.”

“Just like the Red Cross, I want to make sure that every child who has left their country is ensured safety and health.  Let’s do it together,” she said.

For more information about how humanitarians are addressing the complex challenges of migration, visit https://www.un.org/en/migration2022.