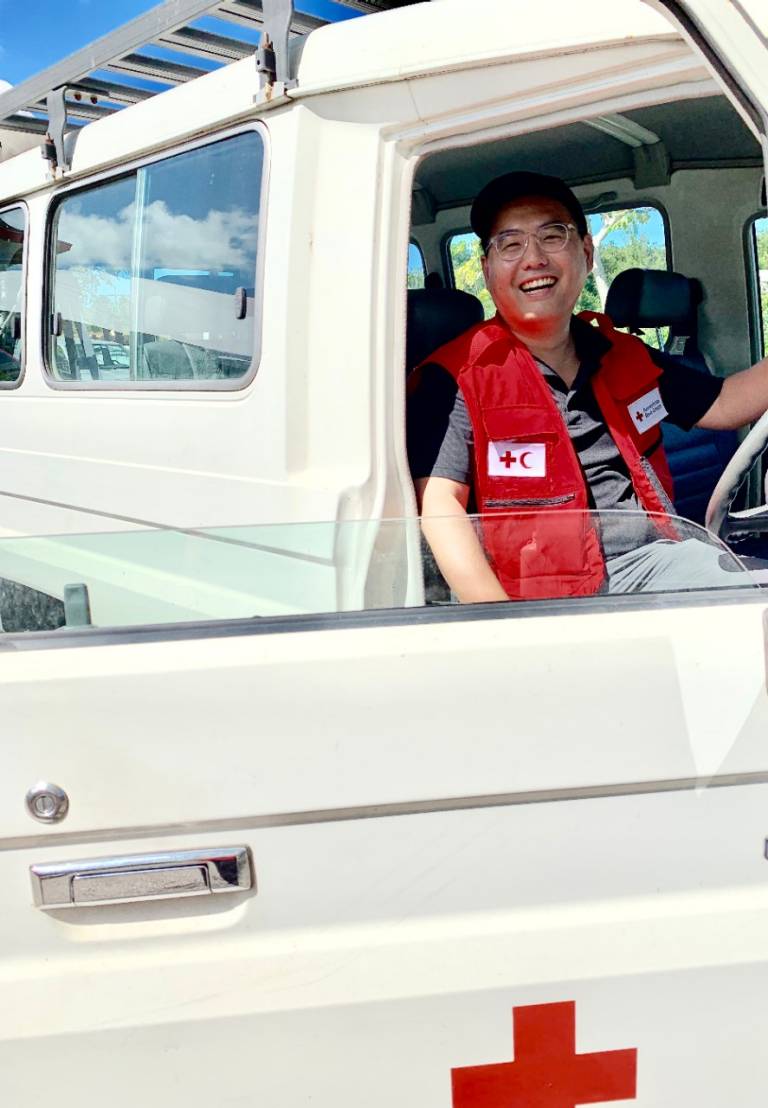 Kanhong Lin says when he puts on his Red Cross vest, he’s signaling his role in a global movement. “I know that someone else in another country is wearing a similar vest, embracing the same values of humanitarianism and service to others. It’s a powerful thing,” he said. 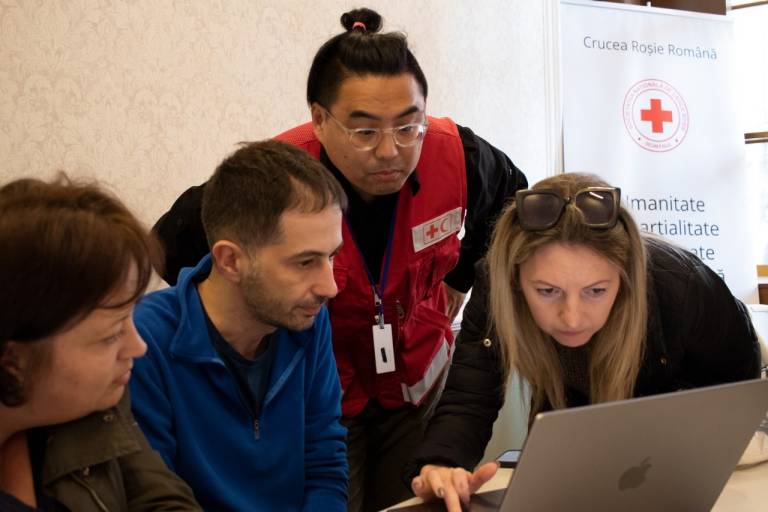 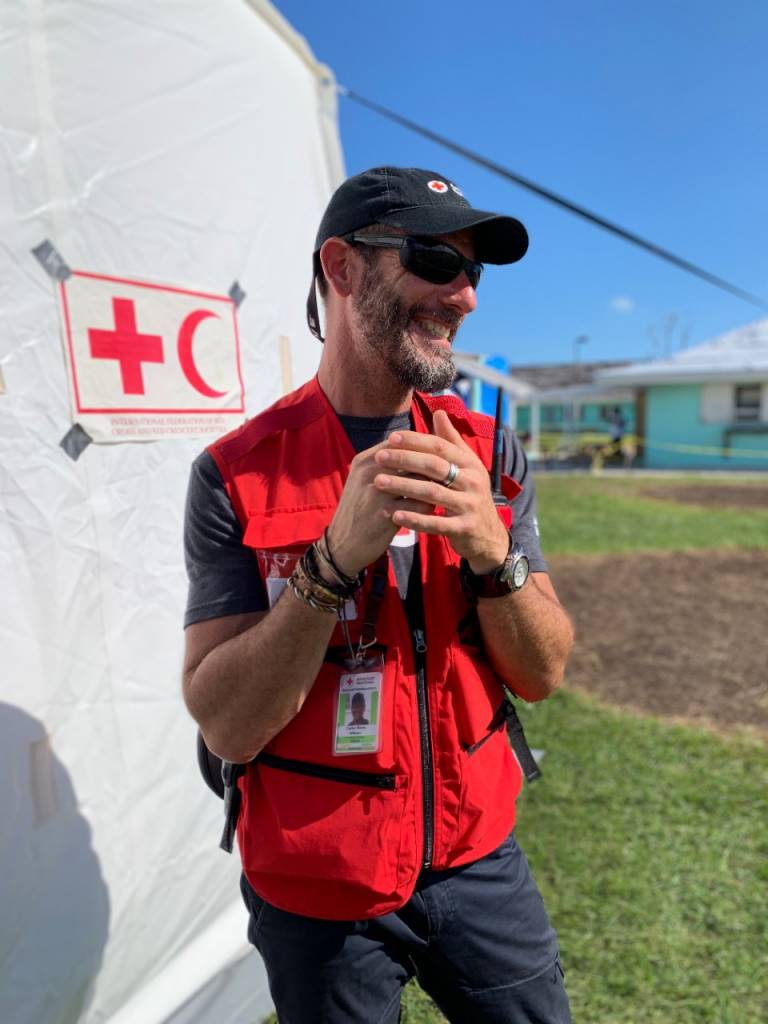 “Our team has a service before self-concept and that means we are ready to be first responders. We want people to get on with their lives after a disaster happens and help them do so with dignity,” Carter Stone said. Photo by Katie Wilkes/ IFRC 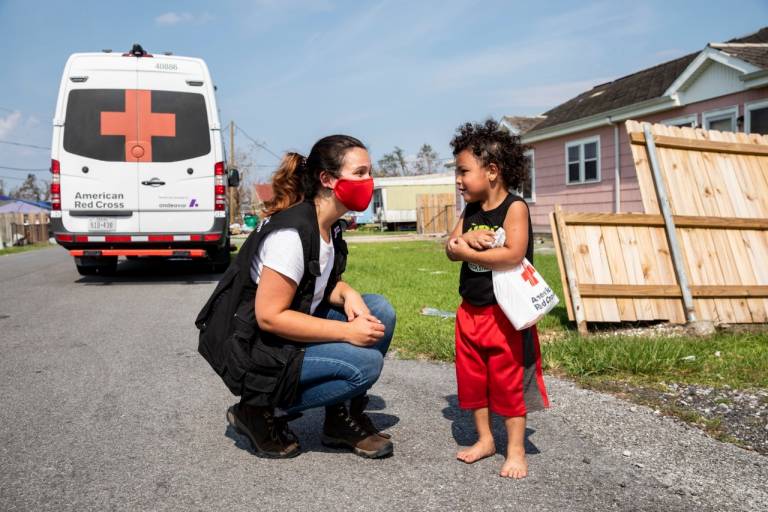 “The biggest joy of my humanitarian work is seeing the hope the Red Cross brings,” said Stefanie Arcangelo. Arcangelo, who has deployed to over a dozen relief operations within the United States.

Every day, the more than 13 million Red Cross workers in 192 countries make a difference around the globe. Nearly 1 in every 65 people worldwide are helped by the Red Cross or Red Crescent each year. In honor of World Humanitarian Day on August 19, we wanted to look beyond the data and statistics and connect with the heart of what these humanitarians do and why. Here are three stories of humanitarians making a difference around the globe.

MEETING PEOPLE WHERE THEY ARE

When Kanhong Lin puts on his Red Cross vest, he’s signaling his role in a global movement. “I know that someone else in another country is wearing a similar vest, embracing the same values of humanitarianism and service to others. It’s a powerful thing,” he said.

Lin arrived in Romania in March of 2022, less than two weeks after the conflict in Ukraine escalated, to serve as a cash assistance program coordinator for International Federation of Red Cross and Red Crescent Societies (IFRC). “This humanitarian crisis was new and the needs were evolving, we needed to be creative in our approach to help those in need,” he said.

In his role, Lin designed an app that allowed Ukrainian refugees to seamlessly apply for cash assistance from the Red Cross. He says that many tend to talk about money in this dry, clinical way but financial assistance is more than just cash, that there’s an emotional impact to this type of aid.

“At the end of the day, cash assistance is designed to get relief to those in need. In this case, it's mostly women who fled with their children. What I love about this type of assistance is that it gives people a sense of control in helping themselves, particularly at a time when people have lost control — they’ve fled their homes, they’ve lost their livelihoods, they’re uncertain about their future.”

Lin says delivering cash through the app in this new way meets people where they are, that the Red Cross is using technology to meet the moment.

“In the past, those in need would need to come to the Red Cross, make an appointment, wait for an appointment, drive out to a location or find transportation to that site, often bringing their small children. When we maximize technology in this way, it frees up our valuable time and expertise to help more people with the challenges they face,” he said.

Lin says his role in the Ukraine crisis focused on treating people fairly and with dignity during the most challenging times of their lives. “This is at the heart of what the Red Cross does,” he said.

GENEROSITY OF THE HUMAN SPIRIT

“It’s nice to say I help people out for a living. It’s even better to say, I work for the Red Cross helping people around the globe,” said Carter Stone. With deployments in Nigeria, Mozambique, the Bahamas and most recently Panama, Stone’s work with the Red Cross is prolific.

A Red Crosser since 2016, Stone is a member of the information technology emergency response unit (ITT ERU) — a group that deploys immediately following a disaster to ensure connectivity with the outside world.  After Cyclone Idai hit Mozambique in 2019, he and his colleagues arrived in the country shortly after the disaster alongside piles of cases filled with critical equipment like satellites. They immediately got to work establishing cell phone and internet connectivity.

“The communications we establish have a real-world impact. We are ensuring that medical professionals can send x-rays to their colleagues to best treat the wounded and allow people to get much-needed assistance,” he said.

Stone says being a humanitarian requires that you believe in the generosity of the human spirit. “Our team has a service-before-self concept, and that means we are ready to be first responders. We want people to get on with their lives after a disaster happens and help them do so with dignity,” he said.

Stone says the work he and his Red Crossers do saves lives.  “I like to help people out and this is why I choose to get up and do this work every day. If you meet us in the field, you’ll see we are giving it our all. That’s what people in need deserve,” he said.

“The biggest joy of my humanitarian work is seeing the hope the Red Cross brings,” said Stefanie Arcangelo.

Arcangelo, who has deployed to over a dozen relief operations within the United States, serves as a disaster public affairs (DPA) leader. In her role on the ground, she focuses on gathering compelling content to highlight the services the Red Cross provides in communities impacted by disaster — from sheltering to feeding and the distribution of emergency supplies.

“The heart of what we do is telling the stories of disaster survivors, what they are going through and sharing how the Red Cross is helping to alleviate their suffering during one of the most difficult moments of their lives,” she said.

In her eight years as a Red Crosser, Arcangelo has captured many heartbreaking stories of people whose lives have been turned upside down. Last year she deployed to Louisiana to support relief efforts in the wake of Hurricane Ida. While she was there, she met a young man named Darcy who was helping repair his mother’s damaged home.

“What struck me the most about Darcy was his optimism. He was literally one person, on the roof of his mother’s home that had been completely destroyed and he was trying to cover it the best he could with a hammer and a blue tarp. He had a big smile on his face, was grateful that everyone was safe and that the Red Cross was there to help his family again,” she said.

“Stories like Darcy’s story are at the heart of what we do as humanitarians,” said Arcangelo.

She says that the Red Cross is a symbol of hope around the world. “Our work is driven by the generosity of donors and the power of volunteers. I encourage anyone with a humanitarian spirit to join us.”