Couple separated by smugglers reunited on board the Responder

Couple separated by smugglers reunited on board the Responder 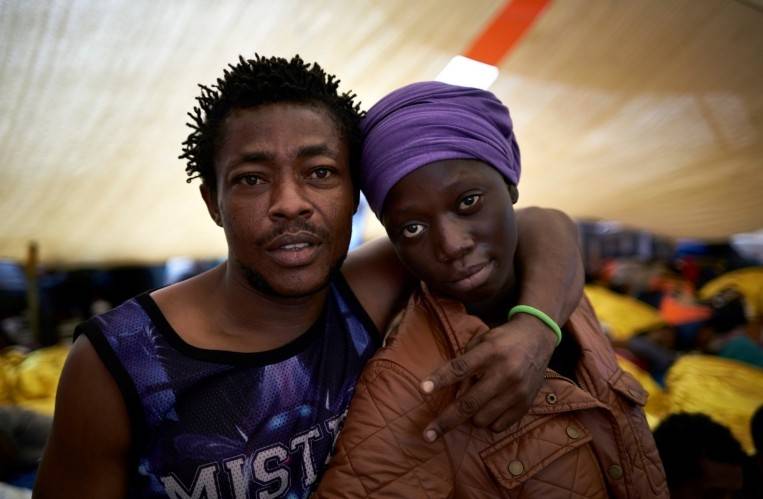 Editor's note: Jenelle Eli is director, International Communications, for the American Red Cross, on a joint mission with The International Federation of the Red Cross and Red Crescent Societies, The Italian Red Cross and Migrant Offshore Aid Station’s (MOAS) #Responder, patrolling the waters between Italy and Libya for migrants in danger of drowning.

The day started early on 2 October onboard the Responder search and rescue vessel. It wasn’t yet 5:00am when a wooden boat with 31 people on board was spotted, bobbing alone in the distance. By 5:35am, a team from the Migrant Offshore Aid Station (MOAS) had rescued all of its passengers and boarded them onto the Responder. Most were from Bangladesh. As soon as they were seated, a Red Cross team started health checks and told them: “You are safe now.”

The first boat to be rescued that day was not the last. Before nightfall, 324 people were on deck. Locky and Mary were two of them.

The couple, who are engaged, left the Libyan coast on the same night, but were separated onto two different wooden vessels. When Locky was rescued early in the morning, he immediately asked the Red Cross and MOAS to help him locate his fiancée. He spent the morning and afternoon despondent. Waiting for news. It wasn’t until much later in the day that Mary boarded the Responder — after a harrowing journey at sea.

Locky and Mary are both from Nigeria, but fled the country separately. He left in fear after his mother was killed. She, an orphan, fled from an abusive uncle. Both are hopeful that Europe will offer them the safety and security they’ve been seeking for so long. When asked why she loves Locky, Mary replied: “He was there when there was no hope.”

The people rescued had been trying to cross the Mediterranean Sea — from Libya to Italy — in an overcrowded boat that had no chance of ever making it to land. It is an eerily familiar story: people desperate to reach Europe, travelling in deathtraps without enough fuel, food, or water. This year alone, more than 3,200 have died this way in the Mediterranean.

To address this tragedy, the Italian Red Cross and International Federation of Red Cross and Red Crescent Societies (IFRC) have launched a joint life-saving mission with MOAS aboard the Responder rescue vessel. The ship patrols the waters between Libya and Italy for migrants in danger of drowning. Once rescued, people receive health checks and first aid from the Red Cross medical team, as well as food, water, and blankets.

Throughout the 24-hour trip to Italy, the 324 people aboard went through a range of emotions: scared, shocked, thankful, hopeful. They had come from many countries, including Syria, Togo, Sierra Leone, Morocco, Libya, and Gambia. Despite their differences, all were looking for the same thing: a better, safer and more peaceful life.

Amid a Flurry of Global Disasters, Red Cross Helping Around the World
.type=article.p=1.t=redcross%3ALine-of-Service%7CInternational.t=redcross%3ARefugees.f=service%3Ainternational-services
Donate Now