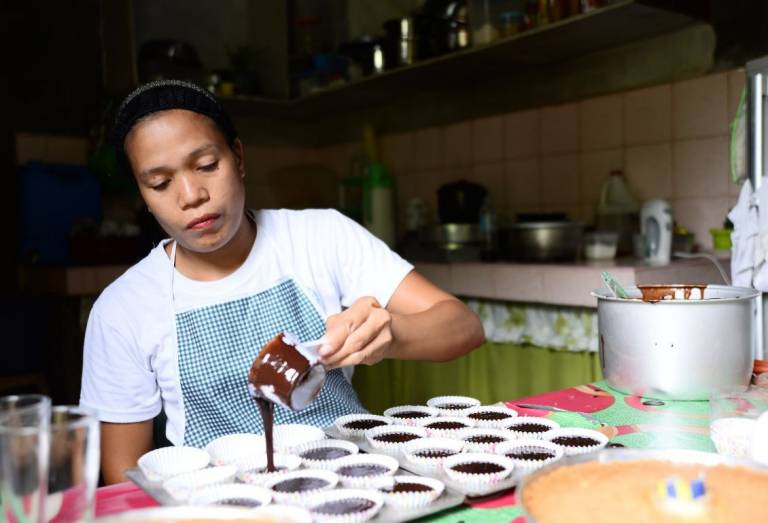 Janice used a cash grant from the Red Cross to purchase essentials for her baking business, like cupcake molds. 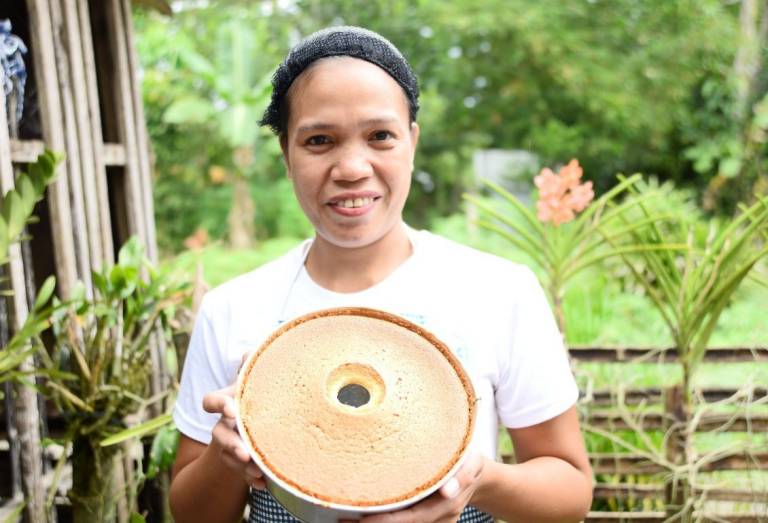 Typhoon Haiyan took Janice’s source of income, but she has since re-established a baking business, thanks to training and a cash grant from the Red Cross. 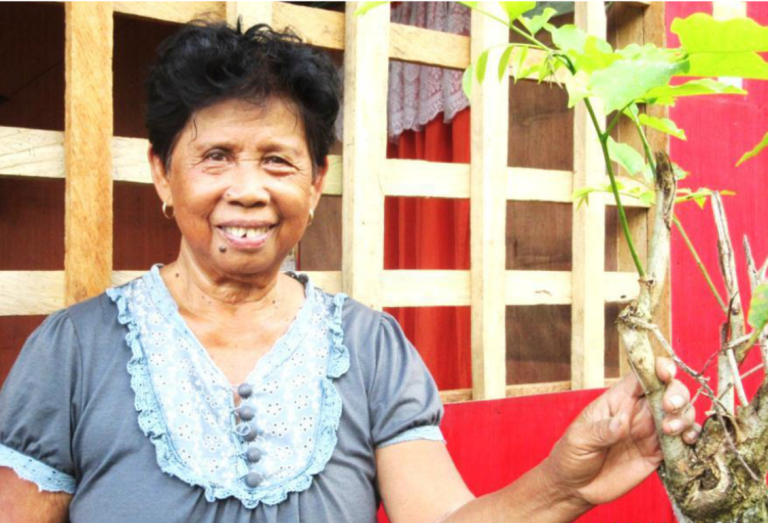 Herminigilda Laurente feels safer in her new house, which she painted red in gratitude to the Red Cross. 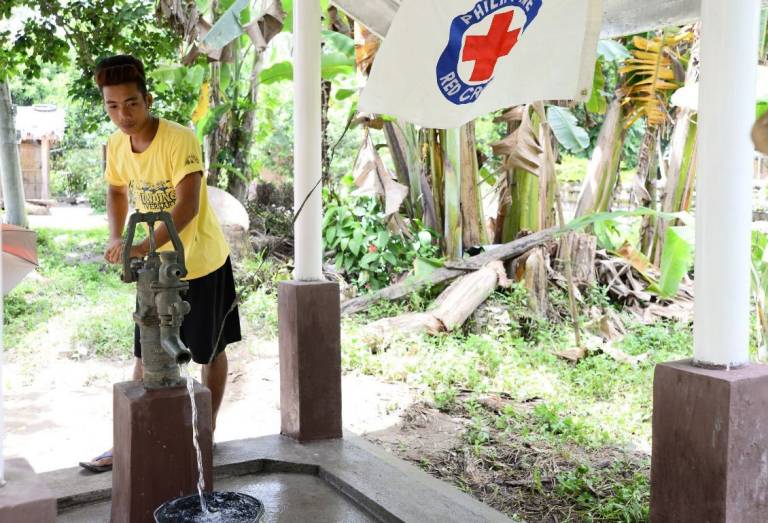 The American Red Cross has constructed nearly 250 water pumps to increase water access for people impacted by the storm. 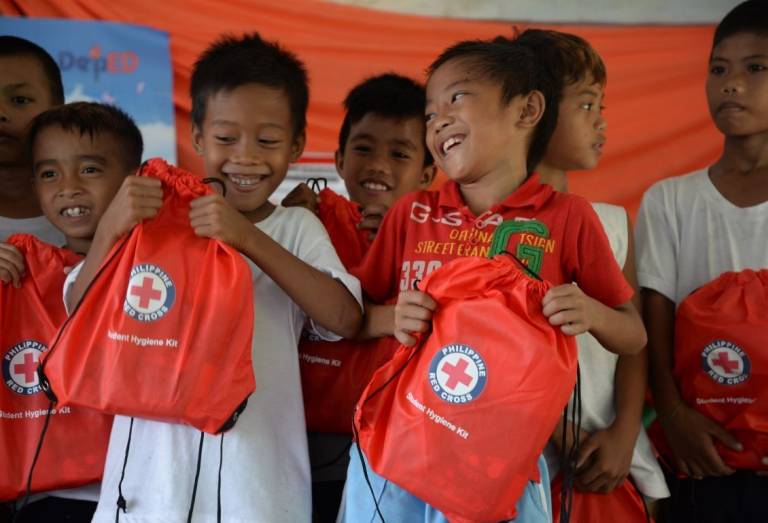 The storm damaged schools in its wake, so the Red Cross has helped repair water & sanitation facilities in educational facilities. Pictured, students look through hygiene kits they received, which included items such toothbrushes, soap, and towels. 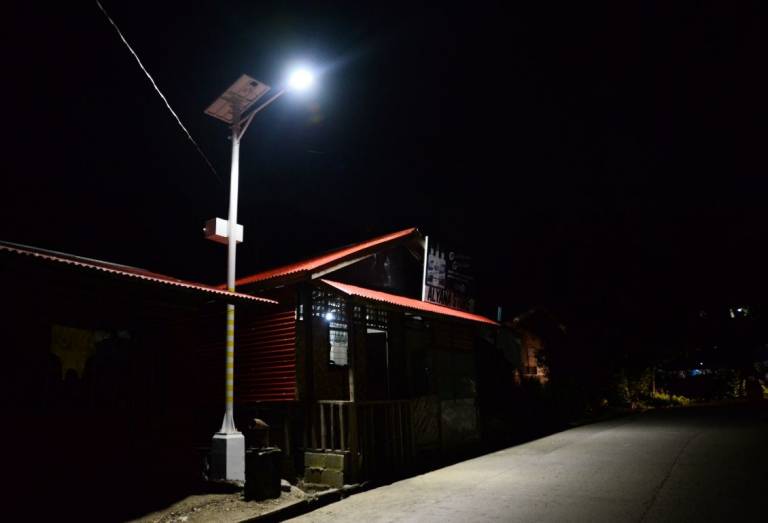 Sixty-six solar lights now illuminate pathways in Oguisan, thanks to the Red Cross. It takes two hours to trek to the town, which includes crossing rivers and walking on steep slopes. Solar lights can help kids study at night, enable business to stay open later, and provide safety for residents.

It’s been four years since Typhoon Haiyan (locally referred to as Typhoon Yolanda) struck the Philippines. The storm took more than 6,000 lives in the island nation—damaging homes, bridges, schools, agricultural land, and businesses in its wake.

The American public donated generously to provide emergency aid to families affected by the storm. For its part, the American Red Cross received more than $88 million, which helped save lives in the Philippines. Our teams worked alongside the global Red Cross Red Crescent network to provide aid such as food, blankets, emergency shelter materials, hygiene items, cash grants, and mosquito nets.

Thanks to the donations we received in the storm’s aftermath, the American Red Cross has been able to help survivors far past the emergency phase—to ensure that they are recovering from the storm and building back safer, healthier, and better prepared for future disasters.

Janice Cinco is one of these survivors. Typhoon Haiyan not only damaged her home, but also took her source of income. The American Red Cross offered Janice an intensive 3-month training course on bread and pastry baking—and provided her with a cash grant (approximately $195) to help her purchase essential equipment.

Janice used the cash grant to buy an oven and other baking tools, like cupcake molds. She has been able to re-establish her food business and now focuses on baking cakes and pastries. Her business has proven to be a major boost to her family’s income, especially during last year’s Christmas season, when she received more than 300 orders for chiffon cakes. Janice is one of more than 14,000 Typhoon Haiyan survivors who have received cash grants to help them restart businesses or create new income opportunities over the past four years.

Rebuilding neighborhoods and communities in the Philippines takes an investment in infrastructure, too. That’s why the American Red Cross has provided funds to help more than 14,100 families reconstruct or repair their homes over the past four years. In addition to distributing funds to help families repair damaged homes, the Red Cross has trained local workers on safe construction practices—and then hired them to rebuild houses destroyed by the storm. Herminigilda Laurente and her husband received approximately $590 and 20 corrugated sheets from the Red Cross, which they used to build a new house.

“I am very proud of this house that we were able to build. I even painted it red as a tribute to Red Cross to show them how very grateful I am for it.” Herminigilda says that she feels safer in her new house, noting that rain and wind do not penetrate inside. She’s confident that her new house will be better able to withstand future storms. Read about another family who rebuilt their home in the storm’s aftermath in Typhoon Haiyan Took Their House, But Not Their Home.

Typhoon Haiyan also damaged water infrastructure in many neighborhoods, so the American Red Cross has constructed nearly 250 water pumps to increase water access for people impacted by the storm. Each water pump still goes through quality checks and tests to ensure that water from the pumps is safe for drinking.

Melanie Abantao, a mother in Peñalosa on the island of Leyte, notes that water from the pump is less likely to be contaminated than wells and is easier to use. She has noticed that children in her neighborhood get sick less often since the Red Cross installed the water pumps and started teaching about hygiene.

These are just a few of the ways that the Red Cross is continuing to help families in the Philippines recover from Typhoon Haiyan: the largest storm to hit the island nation in recorded history. For more information, visit redcross.org/Haiyan.