Housing in Haiti: "My whole life has been transformed"

Housing in Haiti: "My whole life has been transformed" 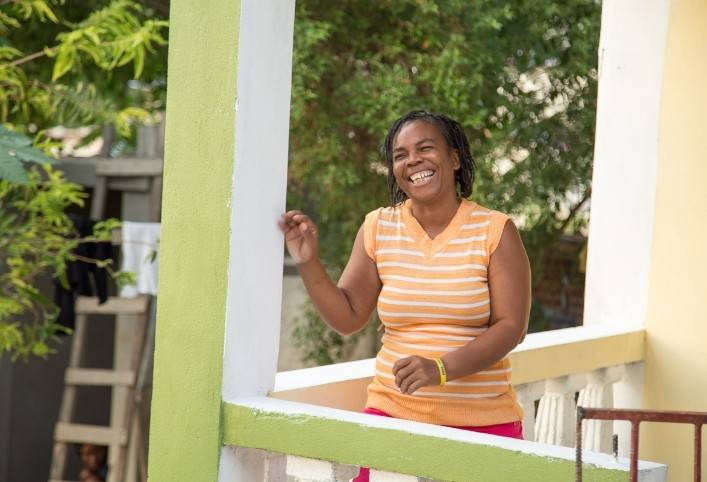 Loremise Austin smiles from the balcony of her House in Campeche, Haiti. 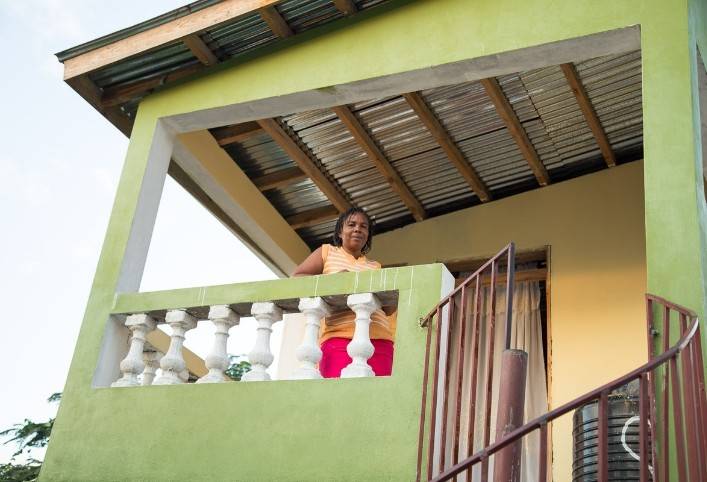 “With this new home, my whole life has been transformed. I would not be able to rebuild this beautiful house without the support and assistance of the American Red Cross,” exclaims Loremise Austin.

Six years after a 7.0 magnitude earthquake struck Haiti, Austin Loremise still remembers the day. She was selling sandals in downtown Port-au-Prince and returned to her neighborhood, Campeche, to look for her children. Relieved to be reunited with them, her feelings quickly turned to grief. What remained of her house was cracked walls and whole sections of the roof in very poor condition. Loremise remembers, “It was impossible for us to live there. I was afraid for my life and for my children’s.”

Parents all around the world shared her pain. As devastating footage rolled across television screens, people donated generously to help families access lifesaving supplies and rebuild for a better future. About 4% of the money donated for Haiti earthquake relief and recovery—$488 million—went to the American Red Cross.

In the quake’s immediate aftermath, generous donations to the Red Cross provided tarps for more than 860,000 people; tents, blankets, and medical care for families in need; access to clean water & sanitation facilities; and so much more (see this 1 year report for details). Nearly one-third of donations made to the American Red Cross were spent in the first six months alone—helping keep people like Loremise and her family alive under trying circumstances.

Loremise and her children used tarps and sheets to forge a shelter in the quake’s aftermath. "My three children, two boys and a girl, and two other people lived uncomfortably in this makeshift shelter for nearly six months." But when heavy rains arrived, she and her children moved back into their damaged house, despite their fear.

As time marched forward, it was clear that Loremise and her neighbors needed more than lifesaving aid. They needed solutions to their damaged homes, weakened medical infrastructure, and dangerous neighborhood infrastructure. So the Red Cross provided funds for essential needs and services in Haiti, such as home repair, hospital construction, a wastewater treatment plant, cholera prevention, roads, and small business support.

And thanks to donations to the American Red Cross, Loremise and her children’s home in Campeche has been repaired and expanded, like thousands of others across Port-au-Prince.

“With this new home, my whole life has been transformed. I would not be able to rebuild this beautiful house without the support and assistance of the American Red Cross,” exclaims Loremise.

Many of Loremise’s neighbors are benefiting from safe and improved housing, as well. In Campeche and its seven surrounding neighborhoods, the American Red Cross has helped to repair homes, increase rental stock, provide subsidies to renters, and even train masons and foremen on how to build houses that can sustain future earthquakes and other natural disasters like hurricanes. The importance of the latter isn’t lost on Loremise, who remarks, “God protect us, I don’t hope for another disaster. But from this work, I am confident that my house will withstand any potential hazard.”

As part of American Red Cross’s LAMIKA project (LAMIKA is an acronym that means “A better life in my neighborhood” in Creole), people in Campeche and its seven surrounding neighborhoods have seen improvements far beyond housing. In addition to shelter, the Red Cross is helping residents to rebuild a place that’s safer, healthier, and more resilient through investments in school and clinic rehabilitation, water and sanitation infrastructure, solar streetlights, newly-repaired schools, walkways, retaining walls to prevent flooding, water points, job training and small business development. These are the things that community members themselves identified as priorities. And thanks to people opening their hearts and wallets in the earthquake’s aftermath, these things are now a reality.

Resident Sara Pierre appreciates this holistic approach to recovery, stating, “Many of our needs were taken into account. In addition to houses rebuilt, retrofitted and reinforced, concrete corridors and paved roads replaced the slippery and impassable trails in rainy weather. Streetlights shed light to darkness. Croix Desprez road, for example, greatly facilitates our daily life. Our whole neighborhood has changed. The image of the entire community is being rebuilt.”

The Haiti earthquake left 1.5 million people homeless. In the past six years, the American Red Cross has helped more than 135,000 through improved housing and neighborhood recovery—on top of the 860,000+ people who received emergency shelter from the global Red Cross network immediately after the earthquake. For a detailed breakdown of how the American Red Cross spent or committed $173 million on shelter in Haiti, and how many households and people were helped visit: http://www.redcross.org/images/MEDIA_CustomProductCatalog/m51740178_American_Red_Cross_Housing_in_Haiti.pdf