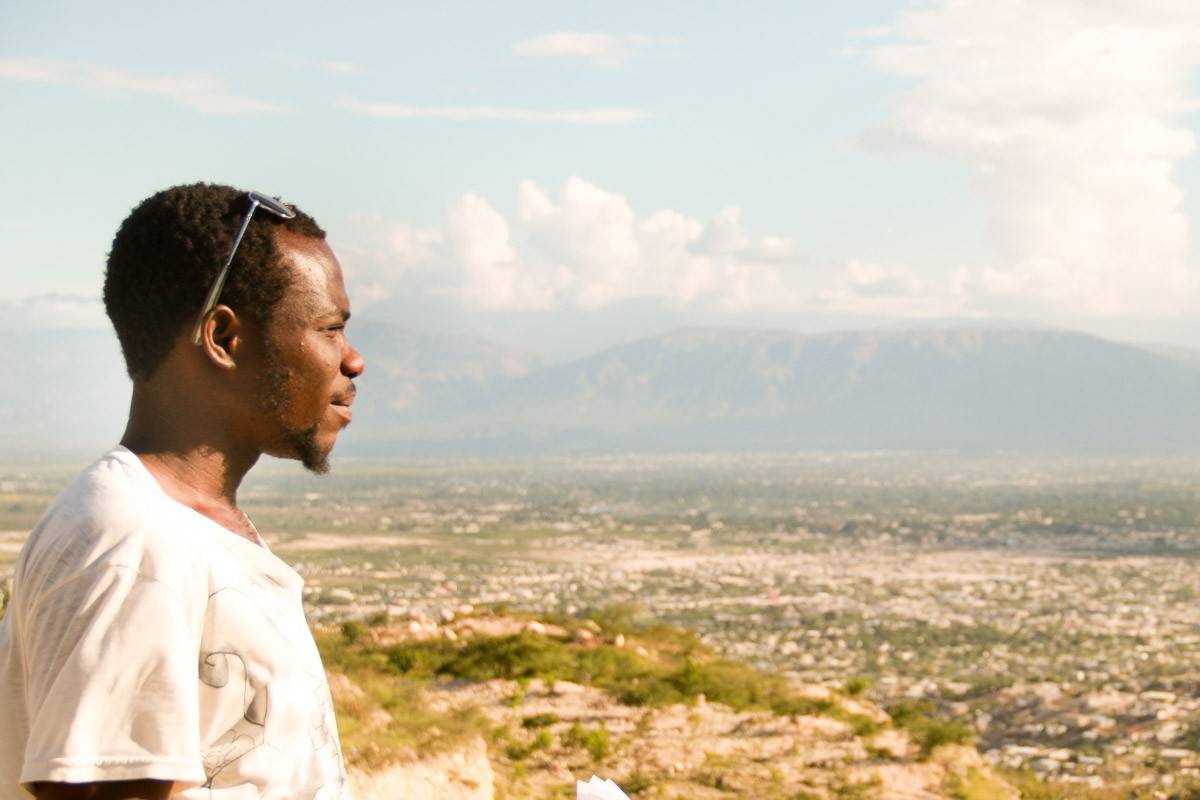 Yonel Estinfleur stands in Bellevue – a neighborhood in Canaan where he recently built a home. With support from the Red Cross, Yonel and other members of Bellevue community participated in a study of their neighborhood.

After the 2010 Haiti earthquake, many families moved out of Port-au-Prince and settled 30 minutes’ drive away in Canaan—a previously uninhabited plot of land with big skies and rolling hills. Since Canaan is a relatively new settlement, its residents have had the opportunity to make decisions about how it develops. Working alongside community members, the American Red Cross and Haitian Red Cross are empowering residents to develop Canaan in a way that is safe, healthy, and resilient to future disasters.

Like thousands of other earthquake survivors, Yonel Estinfleur acquired a piece of land in Canaan in 2010. He was finally able to build a house in 2013 in a neighborhood called Bellevue—an area perched high in the hills, where wind is constant.

Having survived one massive disaster, Yonel and his neighbors know how important it is to be prepared for future hazards. This commitment to disaster preparedness is one reason he and his neighbors are learning about the land they live on and the specific threats they face. With support from the Red Cross, Yonel and other members of Bellevue community participated in a study of their neighborhood that helped them understand the vulnerabilities of the area and assess their capacity to face them.

Among many risks Bellevue is exposed to, the more imminent ones are flooding, landslides and soil erosion. “Water scarcity [finding water] was one of the highlights of our discussions, and together we tried to see how we could solve it," he explains.

“Here, several families live in the gullies and it was found that this area was at risk of flooding,” Yonel says. “Before, we did not care about that, but today, after the assessment was carried out, we noticed that these people should not be building houses in these places and we are raising awareness to convince them to find a safer place to live.”

Engaging residents in decision-making is a vital part of the Red Cross’s work in Canaan. The participatory assessments allow residents to identify risks and priorities themselves. These priorities, in turn, guide how the Red Cross spends donations in Canaan. For example, if flooding is a big problem in one area, the Red Cross may commit to improving drainage canals and networks in that neighborhood. Such improvements are combined with training community members to know how to respond in case of floods through early warning systems, search and rescue, and linking to national disaster response systems. Similarly, if these participatory sessions identify a lack of green space, the Red Cross may grant community groups money to plant trees, start gardens, or establish a park. In 2014, the American Red Cross contributed $80,000 to establish a first aid post—the first of its kind in Canaan and one that is central to the community.

The use of focus groups, historical profiles, seasonal calendars, and community maps encourages a hyper-local focus and keeps important decision making in the hands of the communities and families most affected by these risks. Amos Saint-Hilaire, a manager of a community school explains: “Before, people did not care about the future of Bellevue, it was like every man for himself. Today, we all feel concerned about the risks that surround us.”

“Before, it was not possible to meet and discuss in the community," Amos explains. “This community assessment was carried out on a participatory basis by promoting respect for everybody’s views. Since, solidarity is visible, we feel we can live together and work for the development of Bellevue. We even got together to produce a community map.”

These days, Canaan is continually growing. It’s now home to an estimated 200,000 residents, all of whom will help guide its future.

Canaan was completely unoccupied before the 2010 earthquake. After the quake, the government made the land available for people to live. Average Haitian families have invested more than $100 million of their own money to settle there and develop the neighborhoods they want to live in. The American Red Cross is investing funds to ensure essential urban planning, basic services (water, electricity, roads, etc.) safe construction, job and entrepreneurship opportunities, disaster risk reduction, health, environmental awareness, re-introduction of thousands of trees, and development of public spaces.