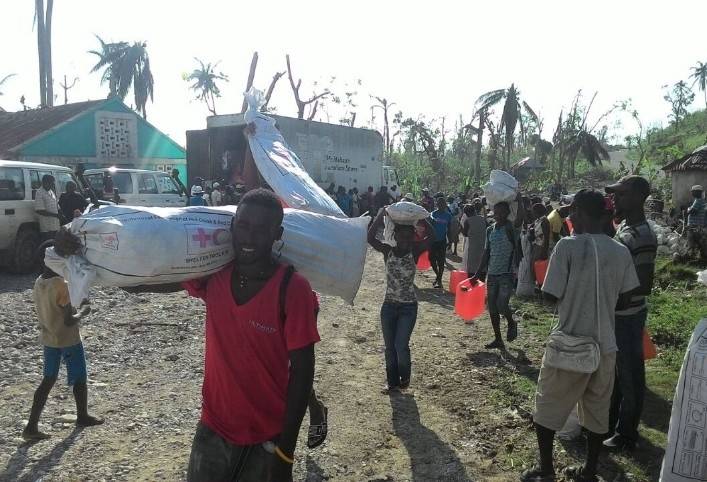 It was not much more than a shower by Haitian standards – about two centimeters of rain overnight.

But it was enough to send rivulets of stinking water through the packed improvised settlements in Haiti’s devastated capital, and cause a short power cut early in the morning at the Red Cross base camp beside the airport.

The first proper rain since the January 12 earthquake the government now says claimed some 230,000 lives was only a taster of what might happen when the rainy season begins in earnest around the end of next month.

“We can get as much as 50 millimetres of rain in two hours,” said Michaële Gedeon, president of the Haitian National Red Cross Society, and there are often floods and high winds with the rain.

The Caribbean hurricane season is also now less than six months away.

All Red Cross Red Crescent personnel working in the shelter sector know they are in a battle with the calendar.

In the Red Cross’ largest single shelter-relief distribution to date, 5,000 vulnerable families were provided with tarps and rope in the La Piste temporary camp in the heart of Port-au-Prince on Saturday.

The distribution was implemented by the Haitian Red Cross supported by Red Cross teams from the United States, Belgium, Netherlands, Luxembourg and Denmark.

The aptly named La Piste (French for “runway”) settlement sprawls across the site of a disused airport but is now home to at least 20,000 earthquake survivors living in makeshift structures.

“The rain increased our worries and prompted us to implement the stop-gap measure of one tarp (instead of two) and a rope per family,” said Chris Darlington, team leader for the American Red Cross.

“With the very high population density in Port-au-Prince,” he adds, “tarps and ropes are the best option while we move toward longer-term solutions. At many of these locations there just isn’t enough room for tents.”

Latrines and drainage systems constructed by the British Red Cross were providing some respite to the people of La Piste.

On the day of the distribution, queues began forming at three in the morning, underscoring the huge demand now for protection from the elements.

The long, weaving lines of people were marshalled by 30 Haitian Red Cross volunteers and 12 international delegates.

“We’re so glad we were able to provide some assistance, but it’s a very challenging environment,” said Darlington.

“We’d love to do more, but we use a systematic approach that requires time and organization, as opposed to just dumping supplies.

“It’s like being stuck in traffic and wanting to move faster, but you just can’t.”

And last week – the very morning of the rain – saw another victory on the shelter front chalked up. A distribution of shelter materials and other items was successfully made to 410 families in the mountains high above Port-au-Prince.

Some previous efforts at distribution in similar areas had to be abandoned when trucks were defeated by the gradient.

“With all the rubble and the hill, we and the Haitian Red Cross volunteers with us virtually had to form a human chain to get to the camp where we knew there were hundreds of families waiting for help,” said Laurent Van Eeckhout, leader of the Benelux team that organized it together with the American Red Cross.

“We decided with the beneficiary families to make the distribution where the drivable road ends, two kilometres away,” Van Eeckhout added. “But we also had to find a way to help people make the journey back with their shelter kits. Each one is two tarpaulins, blankets, jerrycans and mosquito nets and hygiene items as well. It’s heavy stuff.”

Thirty-two Haitian Red Cross volunteers spent five hours in what is punishing heat even this high, charging up the road with wheelbarrows to meet the families half way.

To date, the global Red Cross network response has included the provision to nearly 110,000 people of shelter materials – including nearly 1,000 tents.

The most recent count for the shelter sector as a whole is just over 270,000 people.

But as many as 1.2 million people are, in effect, still sleeping rough in the streets, desperately vulnerable to the coming heavy rains and the sanitary and health risks that will follow.

Haitian National Red Cross Society volunteers prepare to load shelter materials and relief items into wheelbarrows to transport them the last leg of a tortuous journey to a distribution point in the hills high above Port-au-Prince. In the background in Haim Budin, a relief delegate from the Israel’s Magen David Adom, who is embedded with the American Red Cross in Haiti.

If the agencies involved in relief shelter-materials can keep up the current rate of provision for another month, more than half the people living in improvised settlements will have been given some protection from the rains, affording a minimum amount of privacy and dignity.

For various reasons more tents are no longer seen as a viable solution.

“Plastic sheeting is a well-proven material in disaster response,” says Gregg Mcdonald, leader of the shelter-cluster coordination team. “When combined with suitable fixings and salvaged materials it is very strong and near-waterproof.”

Gedeon emphasizes the importance of the issue of land, on which additional and probably safer settlements could be built.

“It’s crucial,” she says. “If more land becomes available, there are at least 5,000 Red Cross volunteers – half of our national strength – who are ready to try to make it safe by doing things like digging drainage channels and clearing sewers.”

But the consequences of large numbers of people being forced to sit out the rainy and hurricane seasons with nothing more to protect them than humanitarian shelter materials, or what they have managed to salvage from the rubble, or in some cases nothing at all, are very serious.