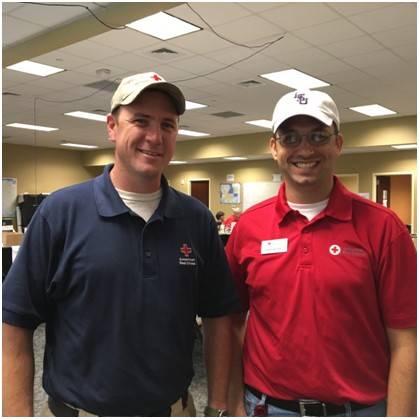 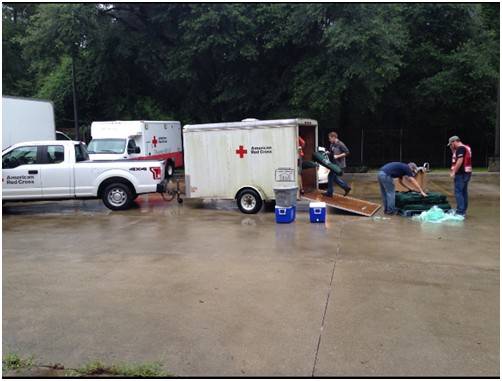 Robert Harris and Chris Nuebel work to load equipment and supplies to transport to a shelter. The rising waters made the task difficult. 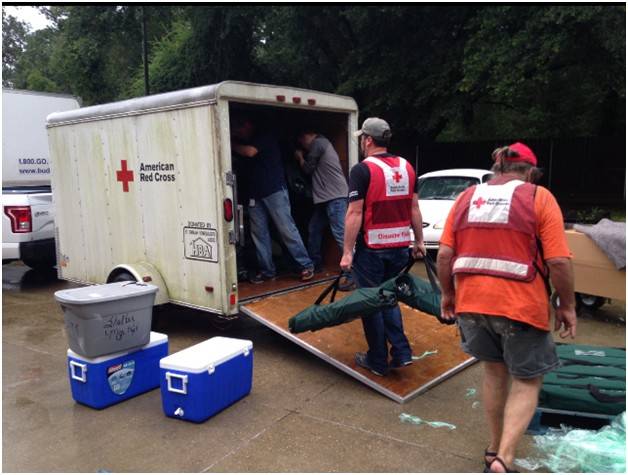 Robert Harris and Chris Nuebel in action – working to get ahead of the rising water.

When Red Cross employees Robert Harris and Chris Nuebel awoke they knew it would not be just another day for work because the rain was already up to their ankles at each of their homes. They communicated with each other and headed to work at the Madisonville Red Cross Chapter. It was not going to be just another day at the office—things were about to change very quickly. The rain continued to pour and the road to the office was beginning to flood. Meanwhile, calls were coming in to the Red Cross requesting reception centers and shelters to take on the displaced residents trying to escape the rising water.

One shelter location was in Kentwood, Louisiana but volunteers who would normally take care of setting up and staffing that location were unable to get there. Harris and Nuebel decided to head that way to drop off shelter supplies. Fortunately, the chapter had a newly purchased pick-up truck and a pre-loaded shelter trailer on hand to help transport the supplies. By the time the pair arrived, a handful of volunteers were able to meet them and help distribute the supplies needed to set up the shelter.

The next call came from the St. Helena area where the situation was more serious, with access proving to be extremely difficult, and worsening by the minute.

Harris and Nuebel crammed as many more cots and provisions as would allow into the trailer and the bed of the truck. They also managed to pack enough food, water and cots for 100 people to last a week.

The pair then followed a route created by high-ground clearance National Guard vehicles and their journey continued. A drive that should have taken 45 minutes, lasted for 5 hours. That’s when Nuebel turned to Harris and asked, “You know this a going to be a one way mission, right?” By the time they finally pulled in to the parking lot of the high school shelter site, dozens of anxious water-logged evacuees had already assembled hoping for help and the Red Cross was finally there.

Harris and Nuebel faced the challenge of setting up the shelter, helping the residents set-up their spaces and teaching them how to prepare ready-to-eat meals.

After a few days, conditions were safe enough for the pair to head home. Before leaving, they met two former Red Cross volunteers who served during the Hurricane Katrina response, but were currently seeking refuge in the shelter. Not only were they profoundly grateful, they expressed an interest to serve again as event-based volunteers.

Robert Harris and Chris Nuebel made the trek to higher ground and continued serving on the disaster response. They now had a new normal for another day at the office.

Robert Harris is the Red Cross Service to the Armed Forces Director for the state of Louisiana.

Chris Nuebel is a Major Gift Officer of Corporate Giving working out of the South East Chapter.